Humor so black and ironic, it’s like stabbing nuns with the same ruler they used to rap your knuckles during piano lessons. IN BRUGES. It’s in Belgium. 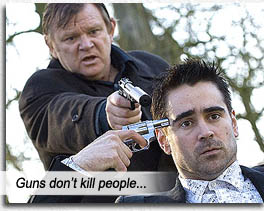 It’s where mismatched hitmen Ken (Brendan Gleeson) and Ray (Colin Farrell) are sent by Harry the Boss (Ralph Fiennes) to lay low after a hit, to await his phone call for their next step.

Like a Guy Ritchie version of Laurel and Hardy, Ken embraces the touristy élan of the picturesque Bruges (pronounced “Broozh”), while Ray turns his collar up against the cold and bitches about waiting around with nothing to do.

A telegram arrives from Harry, which uses the f-word as noun, verb, adverb, adjective, qualifier and preposition. Which lets us see into the tender soul of the man. Fiennes as uber-cockney Harry the Boss, is a cross between the ferocity of Daniel Day Lewis in GANGS OF NEW YORK, the rarified unculture of Phil Daniels in QUADROPHENIA and the unmitigated rape-clown cuntery of Ben Kingsley in SEXY BEAST. Though Fiennes was also ferocious in SCHINDLER’S LIST, his character there was not tempered with any humor – here, Harry’s pure evil hits you like a rubber chicken to the temple. An evil rubber chicken. 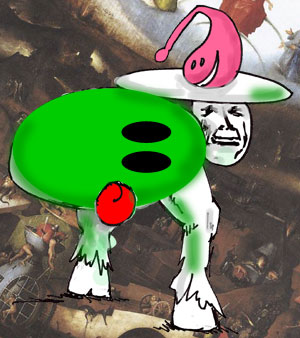 While Ray is on the town making time with some tasty Euro blondness in the form of Clémence Poésy, and befriending a dwarf (Jordan Prentice) with a penchant for tall hookers, and generally getting into another fine mess with his A-type personality, Harry phones Ken with the next hit: Ken has to whack Ray.

Ken refuses. So Harry must travel to the fairytale city to get the job done himself. As this journey towards doom progresses, we see into the crazy, twisted principles of all these men – and they are not unlike the best in all of us, with the worst tacked on to allow them to do their jobs.

While trying to shoot down Ray, Harry is blocked by the pregnant hotel owner, whom he does not simply kill, instead, asking her to move aside courteously, telling her, “I’m not going to go through you and the baby – I’m a nice person!” Harry then makes a deal with Ray that he won’t shoot at him until he runs outside. They both have to then agree on which direction to run…

At the height of its darkness, there is shocking levity – IN BRUGES is actually laugh-out-loud funny. And brutally sad: Ken meets a disturbing end in sticking to his principles and trying to save Ray from Harry’s vengeance.

IN BRUGES is such a seamless, effortless shock to the system, you’d never realize this was only writer-director Martin McDonagh‘s second directorial effort, with its whipcrack dialogue, intertwining plot and symbolically heavy themes.

On their touristy travels, Ken and Ray encounter Hieronymus Bosch’s The Last Judgment, something they can both agree is evocative and disturbing. Bosch symbolism appears throughout the film, with Ray’s dwarf friend and a Mardi Gras street fair playing a pivotal role in the film’s surprising, gut-wrenching finale.

Carter Burwell has such a knack for music score that spanks the nerves at just that right crossroads of pathos and humor; evidenced so brilliantly in BEING JOHN MALKOVICH, now here, in this same type of crucible where darkness and levity collide.

Take a holiday from the Hollywood humdrum IN BRUGES. Bring a gun… And a rubber chicken.