One day Topher Grace will learn that “acting” is not “behaving like you’re making one big apology.” 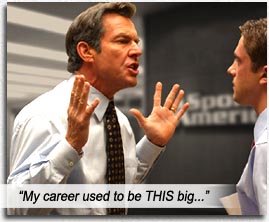 Playing Carter Duryea (a character as solid as a bowel movement after drinking month-old milk), fragile Topher assumes a Sales Head position over a company’s long-time Sales Head, Dan Foreman (Foreman – get it? Oh, Irony! Thy untamed Mistress!) – played adequately bemusedly by Dennis Quaid – who is relegated to Duryea’s “wingman,” though he is twice Duryea’s age and can obviously teach the whippersnapper a thing or three about sales, corporate strategy and – most importantly – acting.

Themes of “family Norman Rockwell” and Duryea’s pathos intertwine with Duryea’s and Foreman’s handling of their business relationship, made more complex by the fact that Duryea is secretly plonking Foreman’s daughter (delectably fleshed by Scarlett Johansson). Like Topher’s acting, all these themes and situations lack “grip” and would probably work better in another movie with characters we actually cared about.

A drawn-out “romantic comedy” with no payoff. Duryea “loses the girl” and foregoes the sales life – but doesn’t actually settle on any goals. Er, and? The movie should follow Topher’s lead and apologize to us.