Before Eddie Murphy, there was MISTER Tibbs. 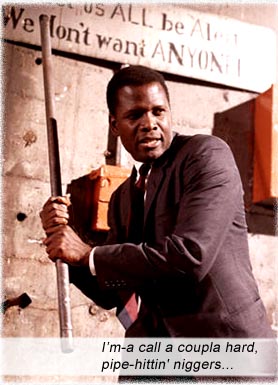 Poitier is Virgil Tibbs (“They call me MISTER Tibbs!”), an African-American that brings the black badge down hard on white rednecks in a podunk Mississippi town.

In this town so racist that the word “boy” has two syllables (“bo-auy”), a rich white man is murdered in the heat of the Mississippi night. Tibbs is arrested – guilty of being Black And Nearby – but it turns out he is a respected Philadelphia homicide detective, so is begrudgingly asked to help with the murder case.

Rod Steiger is police captain Gillespie (looking very much like Skipper from GILLIGAN’S ISLAND), who spends most of the film in a livid racist rage for Tibbs being, a) black, and b) smarter than him.

But HEAT OF THE NIGHT is racist with a heart of complex tolerance, for Gillespie wants Tibbs gone because he raises the ire of the unsheeted Klan folk who populate the backwater town just by his presence. Also, though Gillespie fights Tibbs every frustrating step of the way, he must admit to himself that the murder case is being progressed by Tibbs in a manner that none of his own knucklehead deputies possibly could. And when Gillespie makes tentative steps toward respecting Tibbs, Nick Nolte’s dialogue (from the same film, 48 HRS.) serves to demonstrate Tibbs’s response, “We ain’t partners, we ain’t brothers, and we ain’t friends!”

The aged soundtrack (produced by Quincy Jones, title song sung by Ray Charles) sometimes comes off like a TV episode of THE ROCKFORD FILES.

HEAT OF THE NIGHT is a murder mystery first, with racism an added obstacle that Tibbs must navigate. Of course, the greatest slap in the face to racism comes with a literal slap in the face. When Tibbs accuses a wealthy old bigoted land owner, Endicott (Larry Gates), of murdering the rich white man, Endicott unexpectedly slaps Tibbs across the face hard. And then – the unbelievable happens – Tibbs immediately bitchslaps Endicott back!

Both slaps so fierce and unexpected that they take a second to sink in: a black man in racist Mississippi has slapped an old white man who keeps veritable slaves on his cotton plantation. They stare each other down, no one knowing what to do; not Gillespie, not Endicott, not Tibbs, with Endicott ultimately threatening Tibbs, “There was a time I could have had you shot!”

The racism was inculcated, inground, it was taken for granted that the “niggra” was inferior. There was no doubt. And from the snide pronunciation “niggra” (which we presume developed from “negro”) it was only a short hooded skip to “nigger.”

But they didn’t count on the black Brando. (Or was Brando the white Poitier?) Poitier doesn’t just speak his dialogue, he unleashes it. It attacks you with a hard pipe.

IN THE HEAT OF THE NIGHT swept the 1968 Academy Awards. That’s when everyone started calling him MISTER Poitier.