Into the Valley of Death…

‘Forward, the Light Brigade!’
Was there a man dismay’d ?
Not tho’ the soldier knew
Some one had blunder’d:
Theirs not to make reply,
Theirs not to reason why,
Theirs but to do & die,
Into the valley of Death
Rode the six hundred.
— “The Charge of The Light Brigade,” Alfred, Lord Tennyson.

The Tennyson poem has nothing to do with this movie – it is a better fit with Frank Miller’s 300 (2007) – but it was the first phrase that came to mind when I heard the title of this movie. Using it as the title here, it screams more than just tenuous relevance. 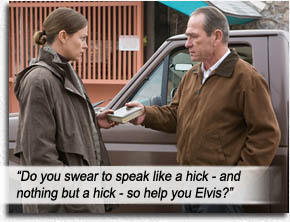 IN THE VALLEY OF ELAH refers to a biblical story – the valley where David capped Goliath – although I fail to see the relevancy of the allusion in this story: Hank Deerfield (Tommy Lee Jones), a Viet Nam vet, is contacted and told his son has returned from Iraq and immediately gone AWOL. Surprised at his son’s uncharacteristic unpatriotic behavior (and not a little scared for his safety), Hank mounts a harrowing search for the boy, digging up unsavory truths about the son he was so proud to send off to “serve his country.”

In a horrifying turn of events, Hank discovers his son (Jonathan Tucker in flashbacks) has been killed during a drug deal gone awry, and has been burned and dismembered, his body strewn around the desert.

On a medical table, there is a shocking, gruesome reveal of his son’s charred head and piecemeal remains.

Like any good father, Hank wants to get to the bottom of his son’s murder… with the help of a flat-bellied model, strapping down her breasts and pretending to play policeman – Charlize Theron, whose part calls for her to complain that she looks hot and that guys don’t take her seriously. Dollop of sexism anyone? So why do I look sexist if I point out the movie’s sexist casting: though she’s made to look like a “ma’am” instead of a glam, Theron’s role as the sympathetic deputy who goes out of her way to help Deerfield, stinks of Hollywood Female Lead Protocol – gotta have someone onscreen who the boys wanna diddle, even if she’s strapped her breasts down and pretending to play policeman. So in a dazed state of self-awareness, why should the writers make her complain about her sitch? Play to your strengths, sugar-tits.

Because Susan Sarandon could only score the role of Hank’s wife – respected, mature, intelligent – but sagging. And – sorry, sugar tits – a much better actor. When the Deerfield couple view the remains of their son bluntly through a glass barrier then walk away down a hospital corridor, the camera holds in long shot and, even from a distance, we feel in our guts what they feel in theirs: their son dead due to the war, looking ahead to living into old age with ruptured souls.

Was there a man dismay’d ?
Not tho’ the soldier knew
Some one had blunder’d:

George W. Bush had claimed another victim for his skull trophy case, on the strength of his Grand Lie; another young man who would never know how insanely his commander-in-chief had blundered.

ELAH follows Hank’s recalcitrant discovery of his son’s character, through piecing together events that led to his murder.

Theirs not to make reply,

His fellow soldiers are closemouthed, or downright lying, about their involvement with his son, so Hank must piece together clues from his son’s cellphone videos and pictures. And face the truth that his son was Some Kinda Godless Asshole.

Theirs not to reason why,
Theirs but to do & die,

When a child ran into the path of his son’s oncoming Humvee, military protocol prohibits stopping for anything or anyone – so his son ran over the child! …Then he stopped the Humvee, got out and took pictures of the child dead in the street.

Tommy Lee Jones’ matter-of-fact style is an emphatic performance, with no fat on it at all; clipped, terse, he’s a lean, desperation machine, falling off the edge of the world. Jason Patric is a hospital bureaucrat who has seen his share of horrifying sights; Josh Brolin, again in a small but effective role, as a politico who wants to block the murder investigation; and Frances Fisher, old yet smooth, in a devil-may-care topless role that steams for its nonchalance…

Into the valley of Death

George W. Bush’s No-Strategy War doesn’t need enemy fire to claim an American victim. The sadistic example set by the warmonger masterminds bled down to the bleating warrior sheep and turned Hank’s son into a monster who would meet such a gruesome fate at the hands of others it had turned into monsters.

Hank finds that his son’s own men killed him in a complicated fracas; the sadism and disassociation exhibited by his son is endemic to the condition of war. No one is liable. No one is reprimanded. It is outrageous! Because the inculcation still echoes – that his son, despite the fatal character flaws, is still considered a “hero”! A young soldier from his son’s unit laments “they shouldn’t send heroes to places like Iraq.” Sorry, goofball – but that’s how this fucked-up country defines  heroes: by sending them to unnecessary war then decorating them upon their return alive, or even if dead – especially if dead.

He goes on to add the thoughtless jarhead credo “they should nuke it and watch it turn back to dust.” The lowest rungs, the smallest cogs, have no understanding that fully half the blame in any continuing conflict is with the aggressors – these United States.

The Valley of Elah is brought up once more at film’s end, making us wonder whether the film-makers intended for it to sound so indicting. If anything, only driving home the embarrassing metaphor that America’s Goliath is being kneecapped by the non-nuclear, stone-age fighting tactics of Iraq’s David.

Yet they ride – as long as they keep volunteering for the lost cause, they’ll keep sending them, futilely – into the valley of Death.