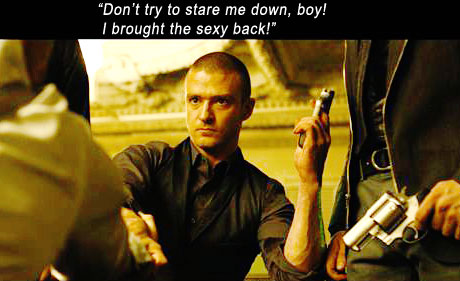 Money Is Time Is Life.

Time is money. Time is life. Time is everything IN TIME; a prescient concept underlying an enjoyable actioner that seems urgently plausible because we’re actually living it now.

Justin Timberlake stars as Will Salas in this ingenious thought experiment by writer-director Andrew Niccol (LORD OF WAR), where people are genetically engineered to live until 25, whereupon they live only one more year – unless they “get more time.” But now it’s earned, as currency, transferred to them via a digital countdown clock on their forearms.

Once we accept this concept – which is very close to reality (we are almost at the point of implanting chips under the skin that will monitor our bank accounts and such) – the drama unfolds: a hunted man bequeaths Will one century. And all Van Damme Timecop breaks loose…

“Timekeepers” – cops who monitor illegal exchanges of time – headed by Raymond (Cillian Murphy), pursue Will as he tries to figure what to do with the extra time. He crosses borders (from his poor time zone to a rich zone) until he ends up on the run with a billionaire-timer’s daughter, and his purpose becomes clear.

IN TIME starts with one of those great one-liners that frames the movie’s theme: Will narrates, “I don’t have time.”

Of course, in theory, by adding time indefinitely, people can live forever. But as the hunted man explains to Will, “Everyone can’t live forever. Where would we put them? Why do you think taxes and prices go up? Cost of living keeps rising to make sure people keep dying. How else could there be men with a million years while most live day to day? The truth is, there’s more than enough. No one has to die before their time… For a few to be immortal, many must die.” After Will discovers the man has given him the century and “timed out” (died), he sees the man’s message scrawled on the window, “Don’t waste my time.”

Olivia Wilde is Will’s mother (since everyone stops aging at 25, this has got to be one of the most beautiful cast movies ever). She gives Will 1/2 hour for his birthday that morning (no mention is made about the process – it’s enough to see people touch wrists and for one person’s clock to count down while the other’s gains time), then pays off a loan that night in town. But the bus home will cost her 2 hours, and she only has 1hr 30mins left! And the walk is 2 hours long! She makes a run for it. Her life literally depends on meeting her son, for him to give back some of the hours he earned at work that day. It’s a thrilling, tragic sequence, and makes us realize that this might be the one way to ensure that chicks get ready on time!

Toll booths to the upper class time zone cost 1 month, 2 months, etc., a high status car costs 59 years plus tax, a “voluntary donation” to a poker game costs a century; back in Will’s zone, a cup of coffee is a few minutes, and of course, there’s the 99 Second Store.

Ultimately, IN TIME is another story about class warfare, along the lines of ROBIN HOOD (redistribution of wealth), H.G. Wells’s THE TIME MACHINE (the two classes, Eloi and Morlocks), going all the way back to METROPOLIS (the suffering working class and the privileged upper class).

Timberlake makes a cool, relatable action hero, while his love interest makes a hot inflatable Real Doll – Amanda Seyfried is porcelain-skinned ultra-upper class Sylvia, who ends up on the run with Will, her father Phillipe (Vincent Kartheiser) a time-billionaire. Will breaks into Phillipe’s time-vault and steals the time capsules for the ghettos.

They eventually accrue a Ten Years Reward on their heads. 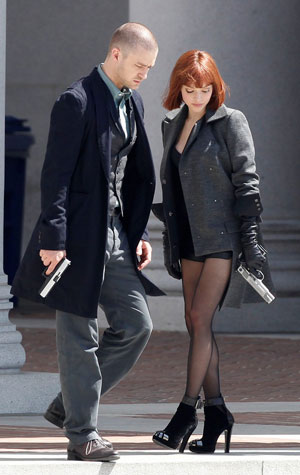 …and you can pose your Real Doll in any position, with dirty little skirts or guns or…

We’re conditioned/engineered to believe that by 18, we should be out earning a living. Then we’re living paycheck to paycheck for… how long? Are you still living between stabs of money? If we don’t make it to the next paycheck – we starve, become homeless, sick, die. If we can’t pay our bills, government fines, taxes, we are squeezed out of the system. We starve, become homeless, sick, die. It’s happening now. In this movie, cash has been replaced by time.

It won’t be long before this imaginary substance called time is used as barter– but hang on! It IS being used: credit cards. We’ve exchanged those pesky pieces of paper currency with imaginary credit. It’s just called credit. Might as well call it anything: credit, finances… time left to live. If we run out of this currency on our pieces of plastic, our time left on this Earth becomes limited. How soon before our pieces of plastic are implanted in our forearms, keeping track of our finances, our credit… our time?

Yes, people have to die. The problem is that you send your most fit, your most virile and most sexually potent to die in wars; meanwhile, you try to keep those aged and useless, those crippled and non-contributing people alive as much as possible. Even those contributing great things to the human species or genome pool are living long past their Use By date. What kind of upside-down idiot society is this? When you meet with a debilitating accident, all your friends on your level of subsistence are the first to offer their help, their money, their time to you, while the corporations who could easily take care of you and a million others without the slightest dent to their profits look the other way and shout Fuck You. What kind of world is this? What kind of species are we?

No matter the patina of “government” or “social construct,” the few will always benefit at the expense of the many, even though there has always been enough to go around. It has been proven there are enough resources in the world to feed it many times over, with no one going hungry or homeless. But are you going to relinquish YOUR money to get that done? When the next guy is not relinquishing his? A sociological bog of complication will not allow this equable situation, even though it can be achieved at ANY TIME if everyone was indeed altruistic.

But it can’t and won’t happen – because if everyone was taken care of… Where would we put them all?