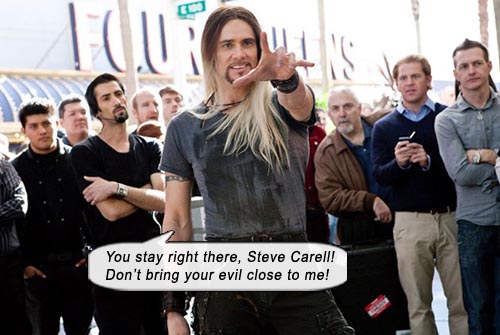 The Incredible Jim Carrey (and the Soporific Steve Carell).

Steve Carell is not a terrible comedian. Yet I still wonder how he gets starring roles as a comedian. Carell is THE INCREDIBLE BURT WONDERSTONE, a successful – yet boring – entertainer (much like Steve Carell), who must get his magician’s tricks and personal licks up to speed, to stave off a new breed of street magician, Steve Gray (Jim Carrey), who threatens his livelihood and legacy.

Jim Carrey saves this movie from being unwatchable. As the edgy, bordering-on-insane street magician (styled after Criss Angel, performing “tricks” that involve self-mutilation and endurance, rather than “magic”), he bitchslaps any semblance of comedy off Steve Carell’s whole persona. Just take one look at that bi-colored leonine mane and try not to laugh. Carrey is not even at the top of his game – just miles above everyone else’s. His tattooed body ripped like Jesus, his primo endurance stunt is sleeping on red-hot coals, alternately snoring and screaming.

Remember back to BRUCE ALMIGHTY, when Carrey was the star and Carell was the B-character (admittedly doing an impressive job)? I constantly ask myself why those roles have changed. It started with EVAN ALMIGHTY, which was a sorta-sequel to BRUCE ALMIGHTY, but dumped Carrey in favor of Carell in the starring role. Under everyone’s noses, that was the beginning of the Apocalypse…

As a nerdy kid, Wonderstone got into magic so that people would like him, and he carries that monkey into adulthood. His old-school tricks (joining steel rings, pulling quarters from behind people’s necks, disappearing acts, etc.) see him to Las Vegas, but after ten years residence at one casino, his act has grown stale. He and his hetero soul mate/assistant, Anton Marvelton (Steve Buscemi), are given an ultimatum by the casino owner to update their act or face the axe. Olivia Wilde joins Wonderstone’s troupe and they continue to be unfunny and unimaginative on stage. Much like Steve Carell and Olivia Wilde.

The B-characters keep our juices flowing, despite Carell’s seemingly willful attempts to drive the movie into a ditch: Jay Mohr as a worshipful out-of-work magician, Alan Arkin as a legendary old magician, and the underplaying James Gandolfini as casino owner Doug Munny, whose role is actual magic, with his open contempt of Wonderstone and constant cluelessness over his own son’s age. (And why should he be concerned about his son’s age? He’s got important Mob business to think about. And I don’t mean THE SOPRANOS, I mean the casino business in Vegas.)

Munny opens a new casino and announces a competition for magicians, to win a residency. Of course, it’s Burt Wonderstone against Steve Gray. But there’s no denying that Gray’s stunts are spectacular crowd-pleasers, so in order for the boring guy to win the day, the filmmakers take Gray out of the competition in a very disturbing way, that not even Carrey’s mugging could alleviate. And Wonderstone’s premier trick that wins him the competition – making an audience disappear – might work for a more absurdist comedy, but here is just plain stupid.

The movie also loses its way with the shaky bromance between Wonderstone and Marvelton. We know that they must breakup and reconcile to show Wonderstone has learned maturity and humility, but then Wonderstone goes through the same process with Olivia Wilde (romance, breakup, reconcile). Enough already, in a movie already crippled by Steve Carell, doubly hobbling itself with bromance and romance piled penis over vagina.

Veteran TV director, Don Scardino (30 ROCK, LAW AND ORDER) tried to make a film about a boring magician. And succeeded.