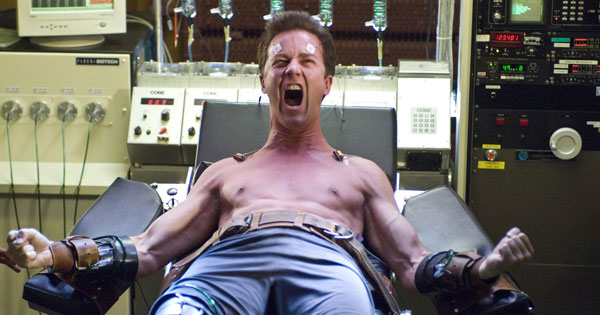 Don’t make him… hungry! You wouldn’t like him when he’s hungry…

Neither a sequel nor an origin tale, THE INCREDIBLE HULK is an adrenalized shot to the sternum – if it doesn’t knock you black and blue, it will at least slap you and call you Susan.

The intro sequence reveals the origin backstory, allowing movie to hit the ground running, with skinny Edward Norton as Bruce Banner hiding out in an old-world Brazilian village, text onscreen, “Days without incident: 158.” Our first impulse is “Wha-?” This is Edward Norton after all, he of renowned Thespian fame; maybe a tad overqualified to deliver lines like, “Hulk smash!”? Then – it hits (no pun): it’s EDWARD NORTON, no stranger to Dual Personality – from his breakout schizoid role opposite Richard Gere in PRIMAL FEAR (1996) to his ravenous Tyler Durden opposite Pitt in FIGHT CLUB (1999), to sliding in effortlessly amongst giants Brando and De Niro in THE SCORE (2001), and even to the nerve-jangling DEATH TO SMOOCHY (2002) – Norton delivers “second personality” like second nature.

Coincidentally, the last HULK movie ended in Brazil, all the press junkets maintaining that starting this movie in Brazil in NO WAY ties it to Ang Lee’s film – whatever you say, movie-mongo dudes…

In Brazil, Banner works in a bottling factory, minimally able to communicate with co-workers; performing body control exercises with a meditation guru who thrills in bitchslapping him incessantly; monitors his heart rate via a wrist readout and, unlike the rest of the fad-infected world, tries NOT to “go green,” awaiting an antidote to his Hulk genes from an online mystery man in America named Mr. Blue, before he dares return home. (Of course, Banner’s code name is… Mr. Green. We didn’t see that coming.) And running gags about stretchy pants abound…

But General Ross (William Hurt, phoning it in) wants Banner’s genes to utilize as military weaponry, so single-minded that he would risk his own daughter’s life to attain that power. Typical pathological military jughead – nothing we haven’t seen in the real world. There’s crazy. Then there’s Army Crazy. Ross enlists the aid of hard army grunt, Emil Blonsky (Tim Roth, deranged as per usual), injected with a super-soldier serum (wink to Captain America fanboys) to take on the Hulk mano-a-mano and capture him for lab experiments which probably include examining the magical material in his pants.

For a superhero action movie, there could be no better pedigree than director Louis Leterrier (TRANSPORTER 2, DANNY THE DOG) and writer Zak Penn (X2, X-MEN: THE LAST STAND).

The Hulk’s first appearance is well-staged, in glimpses and silhouettes. When we see Hulk in full battle daylight, it is astounding! Not just due to the effects team (Gentle Giant Studios, among many) melding him with “reality,” but because of the innovative motion-capture technology of Giant Studios. When the Hulk and the soon-to-be-birthed Abomination move, they are smoothly human; walking upright casually, without the jerkiness or “simulated” movement of computer beings, interacting with debris, machinery, people, water rivulets cascading off flexing muscles… and though his name reflects the 1962 Marvel Comics creation, no more is Hulk a bulky blob, but a svelte man-machine with a sexy v-shape. I especially like the way these creatures run full tilt, with the desperate lean and violent arm-swing of slim sprinters.

So you been concentrating on “tone,” brah!

Although the movie must have offended some aficionados by spawning Hulk through super-soldier serum instead of gamma rays, there are still innumerable canonical nods and winks: Stan Lee as an unwary office guy who drinks a soda tainted with Hulk blood; Bill Bixby in a TV snippet from COURTSHIP OF EDDIE’S FATHER; the Lonely Man Theme from THE HULK TV series, where Bixby walks the lonely highway in snazzy bellbottoms that will be shredded by the next episode; a cameo by Tony Stark (Robert Downey Jr.) to synergize the Avenger Initiative; and – not least, Lou Ferrigno!; again as a security guard (and also voicing the Hulk), looking fit enough to play a real life version of the CGI eponym.

When Banner gets back to the U.S. he covertly looks up his old flame, the daughter of General Ross, Betty (Liv Tyler, also phoning), who, like every woman whose love-of-her-life is on the lam, is time-serving with another guy. Of course, the part-time movie-boyfriend is a complete dork who looks like Casey Kasem in a vest. (It’s never a David Lee Roth circa 1980 Van Halen.) When Betty accidentally encounters tragic Bruce, she’s all over him like a thousand-dollar gfe hooker. If only all women were so devotional as to curl around you so urgently and intimately after years of separation, unquestioning of the condition of your shovel and the medical history of your last hookup. That’s why they call these things “fantasy.”

Betty and Bruce seek out Mr. Blue (an eccentric Tim Blake Nelson), who has been hoarding Hulk blood samples like geekboys hoarding back issues. Mr. Blue doesn’t really help Bruce, but he helps the plot, when Emil Blonsky, insatiable for monstrous power, forces Blue to inject him with Hulk blood; apparently, mixing super-soldier serum and Hulk blood creates a big vomit-colored, bone-splintering monstrosity called The Abomination… which precipitates the TRANSFORMERS moment: that point in any film where you realize everything onscreen is computer-generated and that this eye-candy battle between two big things might as well be a video game – and you’re sitting here watching it even though you’re over 30.

Still, the action surprisingly contains heart. Hulk becomes Hero. No matter the many incarnations that portray Hulk as brainless or fogged with gamma-amnesia, this Hulk retains a sizeable chunk of Banner-brain, and his fierce compassion bleeds right offa the emerald giant’s computer blips. We sense quite poignantly that Hulk’s most compelling battle is not with big things that go boom, but with himself. And as good as Hulk’s battles are, I don’t think many of us over 30 would complain had we been given more of the great Ed Norton doing introspective and sullen.

End frames set up the Avenger Initiative with Stark – it is no secret Marvel are cross-pollinating their cameos; hope springs eternal that IRON MAN and THE INCREDIBLE HULK presage a spate of quality Marvel offerings, and that the slated 2011 release of FIRST AVENGER: CAPTAIN AMERICA won’t be as super-mundane as the 1979 TV series, with Reb Brown gadding about in a foamy muscle suit and plastic bike. As a Cap fan, that debacle made me very angry.

Don’t make me angry. You wouldn’t like me when I’m angry.