Puts the “in” credible.

In every review of THE INCREDIBLES it has become a refrain: “This movie could have worked as well in real life.” 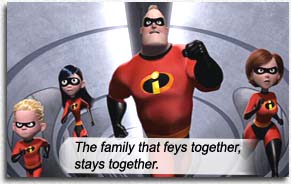 Big Bob Parr (voice of Craig T. Nelson) is a cone-shaped mountain of a guy, an ex-superhero doing time as a layperson in a world gone small – from his office cubicle to his aspirations. Married to super heroine, Elastigirl (voice of Holly Hunter), like every husband, he sneaks out at night occasionally to hang with the boys – in Bob’s case, to fight crime as Mr. Incredible with his former teammate, Frozone (Samuel L. Jackson).Bob’s two kids have inherited superpowers as well: son, Dash, super speed, and daughter Violet, telekinesis and invisibility (think: Invisible Girl from The Fantastic Four). (I’ve contacted high level geneticists to explain how the parental combination of super-strength and elasticity would yield super-speed and invisibility in offspring. But they won’t return my calls.)

This 3D-animation marvel is separated from its peers by its thematic thunder – sure, it’s loaded with the usual “family values,” but digs deeper by making the characters smart enough to ponder their roles as super beings in a mediocre world. The parents know that provincialism denotes they must keep their powers/identities hidden and their children sheltered, but the kids don’t understand why, raising Socratic questions about herd mentality and the conundrum of being “created equal” yet more gifted. Mom tells Dash, “Everyone’s special” (which is its own form of condescension) and Dash, instead of taking it like a Disney knockout punch, retorts quite logically, “Which is another way of saying that nobody is.”

This theme is echoed in the super villain Syndrome (voiced by Jason Lee), whose grand plan is to sell super powers to the public so that “when everyone is super, no one will be.”

And in a surprising tug of our tear nerves, in the midst of the action-packed finale, we see Bob’s vulnerability: He implores his wife Elastigirl to stay with the kids while he battles a giant robot. She declines angrily, accusing him of shallowness and ego, to which he replies, stuttering, “I’m not strong enough.” She, forcefully, “Strong enough? And this will make you stronger?” He retorts, “I can’t lose you again! Not again. I’m not… strong enough.” … wow… How many kids and mindless adults will miss this subtlety?… Incredible!

And when the action comes, it delivers in ways that even some of the more renowned superhero movies do not. And by this I mean, the whole group uses their powers creatively and intelligently, working together to combat their threats efficiently. Truly incredible to behold.

And of course, there is the mandatory Group Hero Pose, perfected so gaily by N’Sync during their two-month heyday. (Apologies to my more sensitive readers for using the “N-word.”)

Written and directed by Brad Bird (who does triple duty as Edna Mode, a fashion designer for the hero-conscious), the humor is wit, rather than slapstick, the heroism is moral rather than muscle-bound and the whole outlook is adult rather than kiddie – THE INCREDIBLES is as real a movie as a cartoon gets.