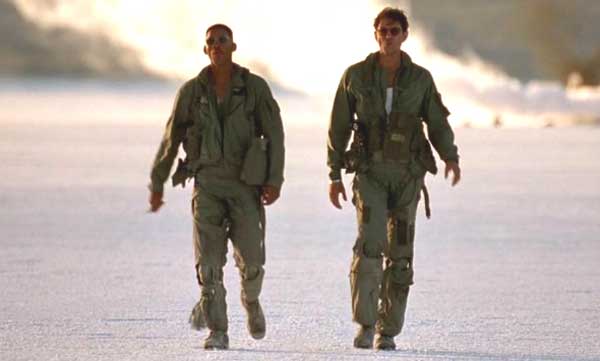 That walk across the salt flats that got you laid like a transcontinental pipe.

The Arrogance of Independence.

The most likely circumstance is that extraterrestrial beings will look nothing like any organisms or machines familiar to us. Extraterrestrials will be the product of billions of years of independent biological evolution, by small steps, each involving a series of tiny mutational accidents, on planets with very different environments from those that characterize Earth.
— Carl Sagan, The Cosmic Connection. 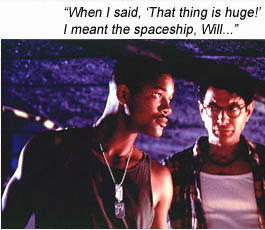 How could they not? Humans made the movie. Arrogant sluts. All alien invasion films are nothing more than human arrogance, from THE DAY THE EARTH STOOD STILL (1951) to CONEHEADS (1999).

Dean Devlin and Roland Emmerich have some gall listing themselves as the sole writers of this confused sci-fi debacle, when the alien arrival scenes in INDEPENDENCE DAY are plagiarized from Arthur C. Clarke’s Childhood’s End. City-sized spaceships eerily filter into Earth’s skies, causing panic, yet simply hovering over major cities. These are the primo scenes in the movie, epic, awe-inspiring, mysterious, humbling, as massive shadows crawl over familiar landscapes, including the cowering White House.

The inevitable human storylines are introduced – to make us care: Marine pilot, Captain Hiller (Will Smith), and his stripper fiancé (Vivica A. Fox); the President (Bill Pullman) and his stranded wife (Mary McDonnell); the tech geek (Jeff Goldblum), his Jewish dad (Judd Hirsch) and his estranged wife (Margaret Colin) who works for the Pres; the crop-dusting pilot (Randy Quaid) and his half-breed brood.

And then – beautiful destruction, beautifully shot, beautifully edited; wholesale death ray decimation of cities, unquestioning, unmerciful, unhuman. And a cheer goes up as the White House is obliterated in a savage blast of energy; no two useless, duplicitous, bureaucratic bricks left standing together.

The singular failure of UFO believers is their lack of imagination.
— James O’Ehley, The Sci-Fi Movie Page.

The Aliens have razed whole cities in seconds. How do the Marines retaliate against power so formidable? Send in Captain Hiller and his fighter plane squadron, which will do as much damage as bacteria on an elephant’s backside.

The gargantuan Alien ships have impenetrable shields, which not even nukes can penetrate. Though nothing can harm them, why do they feel the need to counterattack Will Smith’s bad boys with fighters of their own? Because the humans who wrote the movie have no imagination, forcing the aliens into stunted human methods of warfare.

SETI has proven conclusively that within distances of a few light years of our planet, there is no intelligent life “as we know it.” (‘As we know it’ being the pertinent qualifier – there are no life forms able to communicate with us via the variety of media we employ. Even a recalcitrance to communicate would not curb extra-terrestrial radio transmissions reaching us unbidden, were they in the galactic vicinity.) Therefore, if a motherluvvin’ alien mothership appears near the Moon and launches baby motherluvvin’ vessels at Earth, we know it must have come from SO FAR AWAY that these creatures are truly un-knowable in our terms. Evolution would have taken a completely different tack on their physicality, mentality, culture. And they’ve conquered the LIGHT BARRIER – a feat unthinkable to humans – traveling farther than any man-made satellite ever has to this day. Imagine their technology! Well… we can’t. That’s the point.

The ensemble cast all put in their 2c worth to defeat the aliens: Will Smith getting his black on, Goldblum getting his Goldblum on, Judd Hirsch getting his Jew on, Pullman getting his Clinton on; with Robert Loggia, Harvey Fierstein and Pullman trying to out-rasp each other for maximum cred.

But can anyone’s cred be saved if we examine their hypocritical agenda? Pres Pullman communicates with an alien through some kind of Spock mind-meld. (Too much work to make humans actually “learn” the alien language! Even Brent (Data) Spiner in a cameo as the alien expert couldn’t be offered enough pay to run translation). The Pres “sees” the aliens’ Grand Plan and rasps, “My God!” with a Bon Jovi accent, “They’re like locusts, moving from planet to planet. After they’ve consumed every natural resource, they move on – and we’re next!” Oh, the Aquanetted outrage! Er… excuse me – isn’t that exactly what MAN does? 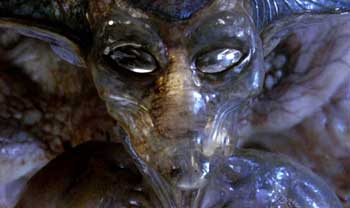 Since Life dragged itself into existence on this planet, its goal has been to overpower; conquering the land, sea, air, space; conquering countries, other religions, weaker states that hold voters; Carl Sagan filibusters in all his books for space exploration and terraforming (making other planets hospitable to mankind’s parameters). After Earth’s resources dry up, MAN himself must find a way to move on and rape some other planet. Terraforming has never yet met with appreciable moralism over destroying life forms that might already be there; or back-contaminating the Earth for that matter – when the Apollo 11 astronauts returned from walking on the Moon, their capsule was blithely opened in the Pacific, without thought to the contaminants from the Moon it might have harbored – because the comfort of the seasick astronauts was more important than a potential plague from the Moon. This was a breach in quarantine protocol that is rarely reported in all the breathless documentaries about the “heroic” achievement.

When faced with extinction from extra-terrestrials, of course we would fight back, but not because we are sanctimoniously ‘right’ – but because we are as SELFISH as the next race of intelligent beings. INDEPENDENCE DAY could have been saved with the inclusion of this one little concept: just admit our selfishness in wanting to LIVE, no matter who or what has to die in preserving that status quo.

Before the humans launch a definitive attack on the alien ships, President Pullman makes us feel dirty with his raspy pep speech: “We will not go gently into the night; we will not vanish without a fight…” Somewhere an orchestra is playing; somewhere a cheese factory is dying.

Released July 4 in the United States – yes, American Independence Day – INDEPENDENCE DAY was all the more slimy for its grasping at the misunderstood “spirit” of freedom.

Freedom is a euphemism for SELFISHNESS. Freedom is not absence of war or adversity. The movie aims for “noble” in uniting humankind against a common enemy. But is war the only facility that will unite our arrogant, belligerent, selfish species? I guess. Heroes are born – any time there is a threat to our jacuzzis and CD sales. Any excuse to create another public holiday…

“I get it now why no one takes Jonathan Frakes seriously!”

If Devlin and Emmerich stole the first act from Clarke, they stole the last act from H.G. Wells – in War Of The Worlds, Wells’s Martian invaders die of Earth viruses. Conveniently forgetting that plagiarism is unethical, Devlin and Emmerich update Wells’s organic virus to a computer virus, which Goldblum and Smith must plant personally in the mothership, which would scramble the force-shields of all the alien ships hovering over cities and leave them open to attack. Cue illogical plot, soporific aliens, enough special effects to feed all the children in Africa, and Einsteinian physics thrown out with the bathwater…

How does Goldblum plant the computer virus in the alien computers – when we can’t even get Macs to talk to PCs?

Maybe the filmmakers will be tempted to call upon the inexplicable alien technology to explain these anomalies: Smith and Goldblum use an alien atmospheric fighter-craft to exit Earth’s atmosphere and infiltrate the mothership in space. Maybe we can credit the aliens with making their ships operational in both mediums – vacuum and atmosphere – and maybe we can even credit them with the speed of their craft (Smith and Goldblum made the trip from the mothership – which was stationed near the moon – back to Earth in the time it took to smoke a cigar), but when Goldblum zapped the mothership with the virus, it negated every alien ship’s force-shields – including the alien craft he was in – so how did he and Smith re-enter Earth’s atmosphere without their ablative shield?

Inspirational music, cheering across the globe, pretty orange explosions, sacrifice, tears, everyone on Earth happy (like an Obama election), movie stars uniting on the blasted white glaring salt flats… Is there anything more desirable to a woman than that last long shot of Goldblum and Smith striding towards the camera, their burning craft in the background, across the white blaze of the salt lake? (Probably the only recorded instance of a white man ever looking cooler than a black man.)

Then the forgotten physics laws kick back in: that same atmosphere that should have burned Smith and Goldblum to a cinder upon their re-entry now fries the remnants of the alien mothership as metal chunks of it streak across the stratosphere to put an epic cap on the overwrought finale…

Carl Sagan wrote, “The virtue of thinking about life elsewhere is that it forces us to stretch our imaginations.”

Probably the only time Carl Sagan was ever wrong…