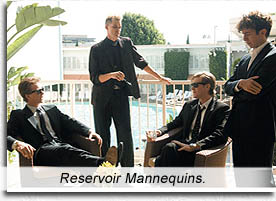 Billed as “the next Mickey Rourke movie” (after the award-winning THE WRESTLER, 2009, even though he filmed this prior to WRESTLER) and tagged as “Brad Renfro’s last screen appearance” (before his untimely death), and written by Bret Easton Ellis (AMERICAN PSYCHO, 2000), it is surprising what a box office failure THE INFORMERS was, going straight-to-DVD so fast that even before I rented it, I was already behind in the late fees.

Then I rented it. Now I’m not surprised. And I’m not paying the late fees.

Empty, bereft of soul, like its characters; a movie experience that leaves you feeling like a victim of a drive-by rape, one good thing can be said about THE INFORMERS – it is as detached, distracting and uninvolving as Ellis’s book.

Yet that is in keeping with the story itself, so I guess it is successful in one sense, in that the characters are written to be exactly this nauseous! In a morally bankrupt Los Angeles of 1983, four separate stories minimally intertwine with many diverse, decadent characters, all sociopaths on burnout paths; damaged goods, desensitized by their riches and traumatized by their insecurities. Unlike the sociopaths in TRAINSPOTTING or TRUE ROMANCE, these people are downright unlikeable.

I’m… too sexy for my blondness

Maybe it’s because I lived and died through the 80s, but I’ve met these people before, and they aren’t new or shocking, they’re not cool or interesting – they’re pathetic. They are “dark” and “edgy” like Donnie Wahlberg was the bad boy of New Kids On The Block.

An early scene features four guys sitting around a wake, spitting chunky gobs of Ellis’s satiric, absurdist writing. Then it loses direction quicker than a crack whore who needs to pay the rent but blows it on blow.

Graham (Jon Foster, blond) is screwing Christie (Amber Heard, blond), and they are both screwing Martin (Austin Nichols, blond). Martin is screwing Laura (Kim Basinger, blond), wife of William (Billy Bob Thornton, blond), who is trying to re-screw Cheryl (Winona Ryder, a brunette with no hope of passing on her genes). The younger blondes constantly fuck – Amber Heard scoring a million brownie points for being topless or naked always – while the older blondes bitch about relationships and drugs.

Meanwhile, Tim (Lou Taylor Pucci, blond) is on holiday in Hawaii with his dad Les (Chris Isaak, drunk), who infantilizes and cockblocks him.

Meanwhile, rockstar Bryan Metro (Mel Raido, drugged out of his mind) hangs with road manager Rhys Ifans (blond) and gets sex everywhere. His band is called The Informers. Like it matters to the story.

Meanwhile, Uncle Peter (Mickey Rourke, blond) visits his nephew Jack (Brad Renfro, blond) only to stash a kidnapped kid in Jack’s bathtub. (Remember back in the day when you could earn money through ransom?) The marketers who pitched this movie as Rourke’s and Renfro’s unwittingly targeted the only interesting story of the bunch.

Rourke is tanned, taut and pumped (prepping for THE WRESTLER role), his shirts not knowing the meaning of buttons or sleeves – but Renfro just looks puffy and old, a reflection of his real life struggle. His character is a bellboy/actor, at one point, going to a very dark place when he beseeches someone who ‘knows a director’: “You have to be willing to do anything in this town… I’m willing to do anything.”

Though each story is compelling in itself, stitching them all together fails them all.

At one point in their drug-addled, wastrel lives, parked overlooking the lights of L.A., sniffing coke, Martin asks a dissatisfied Graham blondly, “What else is there? You already have everything?!” to which Graham replies even more blondly, “I need someone to tell me what’s good and what’s bad, because if nobody tells you these things, how do you know?” How much blonder could it possibly get? Answer: None more blond. Ironic that the person whom he wants philosophic schooling from, with whom he wants a “meaningful relationship” – is blond Christie, the promiscuous airhead!