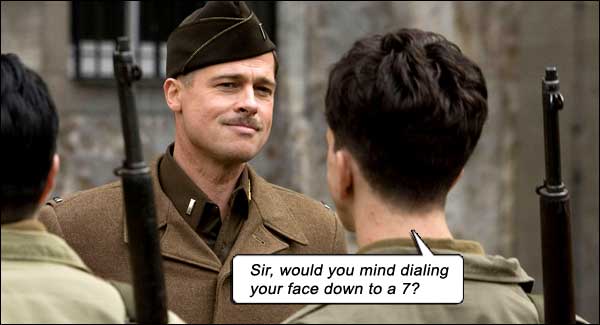 Quentin Tarantino loves cinema. Even the characters in his movies talk cinema. And the ones who aren’t talking cinema still seem to realize they’re in a damn fine piece of it. And the major plot point of Tarantino’s latest cinematic masterpiece, INGLOURIOUS BASTERDS, revolves around the screening of a movie!

Tarantino knows cinema so intimately, he smashes a conglomeration of styles together to arrive at BASTERDS; we could trace the lineage of Kurosawa, Woo, Hitchcock and Leone, but unless you’re a film scholar with your hand down your pants, you just wanna get to the Jewish ultra-violence.

That’s where Brad Pitt comes in. As half-breed hillbilly Apache Aldo Raine, he recruits vengeful Jews during Hitler’s Holocaust and takes the fight to the Germans. His mission: “killin’ Natzees.” Ambushing, scalping, mutilating, baseball-batting… terrorizing. These blood-mad Jews become known as “The Basterds.” Their ultimate plan involves strapping bombs to themselves and blowing themselves up in a cinema packed with Nazi high command, including Hitler (Martin Wuttke) and his Minister for Propaganda, Goebbels (Sylvester Groth), who was also a real life film producer (leave it to Tarantino to uncover that nugget).

But Pitt is here purely for marquee muscle. His screentime is minimal. And though he puts in a fine performance, impressing us with how long he can hold that constipation face, he does little else, except spouting a few lines of dialogue which are far from Tarantino’s most luscious work, trying to perfect a redneck drawl that sounds like it’s coming from a guy who’s making a constipation face. 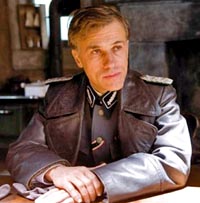 This movie belongs to Christoph Waltz.

As SS officer Hans Landa, “The Jew Hunter,” Waltz’s chilling performance will make your testicles shrivel. Every foreboding appearance he makes as the death-dealing interrogator makes your sphincter tremble in fear. Landa knows when you’re lying. And even if you’re not, you feel like you are. Because you probably are. It is such a fearsome tour de force of fatal charisma and nerve-wracking trepidation, it’s like Waltz did all his acting training with Goebbels.

INGLOURIOUS BASTERDS is unconventionally structured, in Four Chapters, four tenuously linked storylines eventually intertwining for the payoff. And what a payoff! A catharsis for Jewdom. DEFIANCE (2008) showed us Jews who actually fought back during World War II, in a story Inspired By Fact. But writer-director Tarantino, unbound by facts, rewrites history without any compunction (let’s face it, like every American war movie about Viet Nam, Korea, WWII, only without pretending historical authenticity) and takes his WWII fantasy to a level that can only be described (by producer Lawrence Bender) as “a Jewish wet dream.”

Movie opens like a Leone western, officer Landa inviting himself into a desolate farmhouse of a poor farmer and his trembling daughters. He is looking for Jews that the farmer might be hiding. The tension that follows is like the best of Leone, hard closeups of the two faces and master shots that never budge. We are so gripped by the movie in these opening minutes and into the following Chapters, we never even realize its unconventional structure. Proving that good story wins out every time over a Hollywood system atrophying in its glossy rut.

It’s like four TWILIGHT ZONE vignettes strung together; every time the screen goes to black to end a Chapter, we find ourselves exhaling in relief and needing a neck massage from a nude female provider slash dancer. And as every new Chapter opens, we are thrust spittle-mouthed and unbreathing into the tension-driven second act of something that started before we arrived. It’s Total Tarantino. 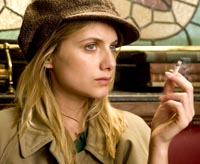 In the Chapter “A German Night In Paris” we are introduced to Mélanie Laurent, who plays Shoshanna, doing Clint Eastwood as a sexy French, blond, green-eyed avenger. (This is what Alison Eastwood, daughter of Clint, should have become, instead of the C-Movie junkie she ended up as.)

Eli Roth is Donnie Donowitz, “The Bear Jew,” who gets his kicks beating Germans to death with a baseball bat. (Roth is the writer-director of HOSTEL, 2005 – any wonder he loves the ultra-violence? In a German interview, when asked to justify his character’s bloodthirstiness, he was outraged, “This movie is nothing but magic tricks, but your grandparents turned my ancestors into furniture! Into lamp shades!”)

The characterizations are formidable, each actor embodying the French and German and British characters they play. Noteworthy is August Diehl (as Major Hellstrom), another German-born actor, who – like Karl-Otto Alberty and Anton Diffring before him – scares the hell out of us like a real life Gestapo officer. 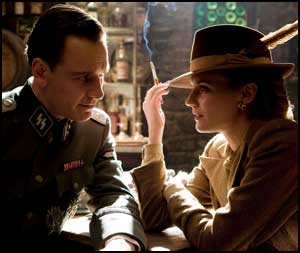 I think this might be the first time I noticed the power and prowess of German-born Michael Fassbender. (He was Spartan warrior Stelios in 300, but lost amongst the abs, and would soon go on to greater glories in X-MEN: DAYS OF FUTURE PAST, SHAME, and beyond.) His British undercover officer Archie Hicox is a tour de force performance, square-jawed and steely-gazed, slipping effortlessly in and out of English and German. Like Fassbender, Diane Kruger is also German-born and also impresses with her effortless bi-lingual German tongue.

INGLOURIOUS BASTERDS is that rara avis – a dialogue-driven war film more intense and exciting than any driven by pretty orange explosions. 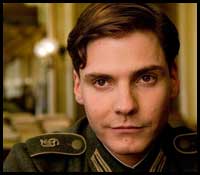 Within the film INGLOURIOUS BASTERDS is Goebbels’s NATION’S PRIDE, which premieres at Shoshanna’s theater. Daniel Brühl (looking like a young Christopher Reeve) stars as “himself” Fredrick Zoller, a German hero who staved off an American advance singlehandedly by sniping from a bell tower. It’s a blackly hilarious satire on war films. (SAVING PRIVATE RYAN actually has a scene like this – from an American sniper’s point of view.)

It slots neatly with the concept that Tarantino tries to convey: that Germans are heroes too. The German commander who refuses to answer Raine and gets beaten by Bear was awarded his medal for “bravery” – proving it by dying at the bat of Bear. Message may be lost not through Tarantino’s fault, but that of his audience – because American war films and politicians have indoctrinated generations into believing all enemy combatants are quivering cowards – even if they display heroism.

In 2002, Bill Maher’s TV show, POLITICALLY INCORRECT, was cancelled because he expressed the – ahem – politically incorrect view that the terrorists who flew the planes into the Twin Towers were anything BUT cowards. Which is true, by all definitions of American bravery. But which was blockheadedly refuted because they were enemy combatants. 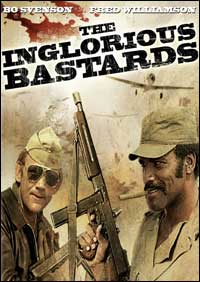 There’s a strange paradox with the misspelling of this movie’s title.

Like THE PURSUIT OF HAPPYNESS (2006), I hate misspelling for the sake of street-cred. Tarantino must know the film QUEL MALEDETTO TRENO BLINDATO (aka THE INGLORIOUS BASTARDS, 1978), an Italian WWII flick with a completely different plot; also called G.I. BRO, cos of star Fred Williamson’s blackness – I’m not EVEN joking. (Bo Svenson, another star of that film, plays an American colonel in Tarantino’s BASTERDS – which is either a giant coincidence or Tarantino simply flaunting his filmic erudition. Which proves he knows that film.) Is he trying to differentiate his movie from that one? Why not name his film something else? Even THE BASTARDS would have been sufficient.

So here is the paradox: Tarantino acknowledges his audience’s intelligence in many ways, not least by allowing his characters to speak in their native tongues (with subtitles), yet he simultaneously drives the intelligence quotient down by misspelling the title, for a whole generation of youngsters to be confused if this is the first time they are encountering those words. (The same kids who won’t understand the rage of the Jews against Nazi atrocities that are never shown.) Not to mention keeping that swathe of current American adults ignorant who don’t know the difference. You know, the Stoopid Basterds.

In a February 2010 interview with Tarantino, Rachel Maddow raised the point that Aldo Raine’s methods echo al Qaeda’s, which would mean that Americans are cheering methods used by their enemies because their own side is using them, euphemizing the methods as “guerrilla” or “freedom fighter” instead of “terrorist.” Euphemizing shit into Shinola.

For youngsters who do not know of the Holocaust, Tarantino does not include any scenes to justify Jews behaving so insanely against “Natzees.” As adults, we go into BASTERDS with prior knowledge of Nazi atrocities towards races and ideologies they saw as threats to their primacy – but for the kids unaware that 6 million Jews were murdered under Hitler’s command, there are no indications of the human experiments and gas ovens and concentration camps; Tarantino offers no reason for the Nazis to be maligned enough to warrant incineration in a theater. Shoshanna’s family being slayed at the opening of the movie is the only real violence the Germans perpetrate. In this movie, strangely enough, the Jews are the aggressors and are actually “anti-heroes”!