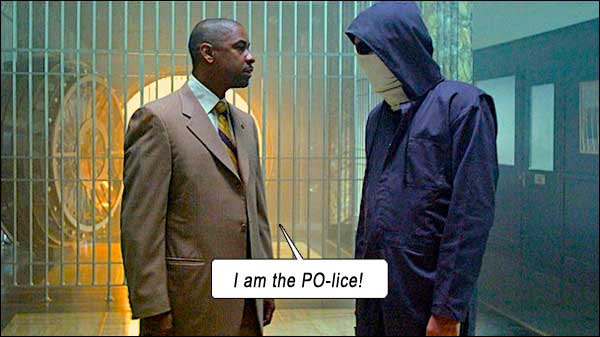 INSIDE MAN opens with Clive Owen, as Dalton Russell, in hard close-up, warning us to listen to every word he says, because he’ll only say it once. (As George McFly might say, I don’t think I can handle that kind of pressure.) Dalton goes on to boast of his Perfect Heist; we know he speaks truth because we are shown heist scenes intercut with flash-forwards of the cops getting nowhere interrogating hostages. This Spike Lee Joint is structured so that we know the outcome during the first act – at least, we think we do – for there is a robbery within a robbery in this heist, and it is that secondary robbery which knots everyone’s knickers.

With Clive Owen laying down his customary foreboding, soft-spoken Hard Guy; with Denzel Washington plying his smooth blackness, playing yet another Intelligent Cop (is that oxymoron?); with Christopher Plummer settling into one of his comfort-zone characters – blackhearted CEO (is that tautology?); with Willem Dafoe playing it straighter than his Jesus as a SWAT captain, this movie seems all too familiar, yet director Lee and writer Russell Gewirtz exploit the symbiotic triangle of heister-hostage-heat in refreshing ways.

The heisters do not seem too concerned with looting cash. The hostages are regularly interchanged with their captors (in being forced to dress like their captors, in blue jumpsuit, mask and shades, we are never sure who the true hostages or “inside men” are). And the heat – Denzel, as Detective Frazier – is not as ethical as most leading police characters. All culminating in a satisfying resolution which illustrates that not every heist movie has to land someone in jail to comply with MPAA hypocrisy.

Amongst all the “comfortable” leading roles, only Jodie Foster plays hard against type, doing some strange hybrid of OCEAN’S TWELVE School of Smug by way of Vincent Wolf from PULP FICTION, playing a kind of “cleaner/facilitator” for the super-rich, with inside connections so high and dirty that – like Austin Powers – “Danger” is her middle name. I’m still trying to figure out how much scenery was chewed.

After the heist is underway at a Manhattan bank – with the usual scenes of cameras deactivated ingeniously, this-is-a-stick-up and we-mean-business – head CEO of the bank, Arthur Case (Plummer), enlists the aid of Madeline White (Foster) to safeguard a life-damaging secret he harbors in one of the bank’s safety deposit boxes.

No matter her over-the-cheese performance, it is refreshing to see a strong female character (Foster) who does NOT use sex as her social-climbing lever or powermongering weapon, but sheer politics instead. Not that she is devoid of female wiles; there is a scene in longshot, tracking Foster walking alongside Plummer – as she explains how she will aid him, her words are totally lost on me, as my discernment was wholly impaired during that scene by secretariat skirt cleaving to muscled buttock and silk-tanned legs. Convent-severe and domina-disciplined, Foster comes off as dangerous all right – but in the wrong way: not dangerous like she’ll stymie your career or have you shot – dangerous like she’s going to clamp your nipples too tight or grind a 5-inch spike heel into your scrotum. Caveat homo.

Obviously if a CEO is desperate to guard a secret, it is that selfsame secret the thieves are after.

Amongst the thieves, stunning Kim Director, a cross between Liv Tyler and a Robinsons-May mannequin (her fifth outing with Lee, second with Washington). There is much ado made over her ample bosom. As above, I concede to paying absolutely no attention to anything else during those segments. So sue me for being a fully functioning male. 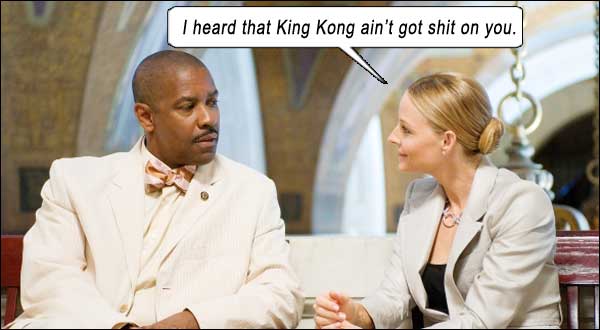 Any film that alludes to three Pacino films has to be doing something right – even if what it’s doing right is just mentioning those films; Frazier’s sidekick, Detective Bill Mitchell (Chiwetel Ejiofor) cites the Michael Corleone method of disposition (“Do you renounce Satan? – Bam!”); Dalton mockingly refers to Frazier as “Serpico”; and Frazier throws in a reference to INSIDE MAN’s granddaddy, DOG DAY AFTERNOON – a self-deprecating jab, letting us know the filmmakers are well aware of how closely their pic follows Al’s lead.

All INSIDE MAN’s characters are portrayed as intelligent (with no silly “movie” slip-ups to drive the plot to a crime-doesn’t-pay conclusion). Therefore, Dalton’s mundane request for a bus and plane are taken with suspicion of stalling by Frazier, who realizes Dalton is too wily to be pulling your average Dog Day heist. (The only person who displays insurmountable stupidity is Arthur Case, whose incriminating secret could have been disposed of with a twenty-dollar paper shredder or the flush of a toilet.) The game of outguessing one another wears thin enough for the SWAT captain to take the drastic measure of storming the bank.

Just the way Dalton planned it…

Suffice to say, there are surprises in store. And note that the title is not pertaining to the hostage switcharounds, but a wry reference to Dalton’s method of eluding the heat in the final scenes.

And somewhere, an MPAA censor has been fired for letting this dissident message go unchecked in free christian amerika.