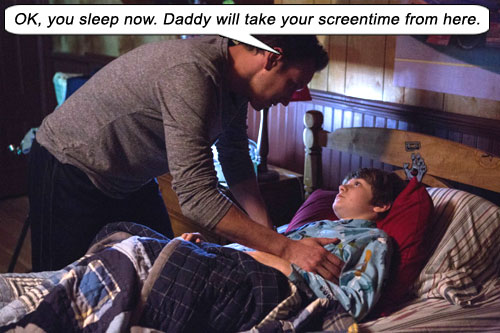 Taking for granted the world has seen INSIDIOUS, writer Leigh Whannell and co-writer/director James Wan drop us into INSIDIOUS CHAPTER 2 like step-children being dropped off in the woods to fend for ourselves or die.

If you haven’t seen INSIDIOUS, you’re in for a treat of characters you don’t know appearing in places you never saw doing things you don’t care about.

The family has moved into Mom’s place while “their house is being fixed” (again, for reasons we’ll never know – unless we watched INSIDIOUS). Thankfully, Mom lives in an upper class sprawling old chateau with lots of upstairs, downstairs, basement and attic for ghosts to skulk in and people to get chased around, instead of in a trailer park or a two-bedroom apartment where the neighbors just wouldn’t stand for all that hijinks.

The two investigators from the last film (Leigh Whannell and Angus Sampson) return for comic relief. And a new paranormal investigator joins the cast to make things more confusing, Steve Coulter as Carl, whose forte is throwing lettered dice to make the ghosts spell out their messages. Better than twitter.

INSIDIOUS CHAPTER 2 is well written and produced, with a few eerie passages, yet is not a stand-alone film and feels disjointed and incomplete; the unestablished characters are a big part of that discomfiture, as they walk around looking through ajar doors into dark rooms and cellars. Amidst the loud noises, peripheral visions and jump scares, the plot involves the police investigating whether Josh killed the psychic old bat from the last movie (Lin Shaye as Elise). So the focus has shifted off the boy Dalton (who was possessed in the last film), and cast onto the father Josh. Yet they try to retain that youth angle, as we see Josh as a boy in flashbacks, being terrorized by an unknown entity.

There are also more physical “ghosts” here: instead of being eerie, this many apparitions walking around in whiteface and Avril Lavigne mascara just reminds us there’s a makeup trailer out the back somewhere. When a woman specter appears to Renai and slaps her, screaming, “Don’t you dare!”, the intent is to create mystery with the ghost’s enigmatic line – but when it is so obvious the ghost is just a woman in ghoulish makeup, we just shake our heads and call Avril Lavigne.

There’s a backstory of a boy’s mistreatment which made him kill people for his mother (–cough–PSYCHO). And that psychic old bat Elise is now a ghost in the spirit world! At last – logic! Of course in a world where ghosts exist, if one of the living characters dies, they should also become a ghost. So they contact Elise with a séance and Carl’s rolling dice.

Carl raises a lantern in the other dimension and ominously states, “Into the Further we go!” Another example of disjointed screenwriting. Elise called the ghost world The Further in the previous movie, but in this movie, we never hear that term until now. Which I’m sure prompted many confused viewers to exclaim, “What the Further?” Ghost Elise proclaims, “I’ve seen the Better Place but came back because I heard you calling.” Royt… That Better Place couldn’t have been that much “better.” Thankfully, the wrinkly old charlatan is wearing her ghost clothes! (I constantly question that same ignorant, incomprehensible concept in every single ghost movie: Why are ghosts dressed? Isn’t the ghost the supposed “soul” of the human? Isn’t the soul an incorporeal wraith? And if the soul does choose to manifest itself comprehensibly, what does it draw on to put clothes onto its ethereal form? Or do clothes have ghosts too? And the ghosts of the clothes just automatically appear with their owner?)

As they did with their SAW franchise, Whannell and Wan make a decision to link this movie inextricably with its predecessor. They reshoot some of the inexplicable apparition scenes from the last film from the point of view of the inexplicable apparitions. Thusly, though these scenes display real storytelling adroitness, inexplicable terror, once explained, becomes not terror. INSIDIOUS CHAPTER 2 becomes more of a thriller than a horror story. And all Avril Lavigne breaks loose.