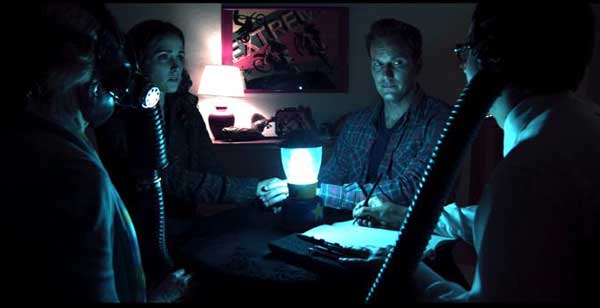 “Do we have to do this in the dark? The spirit dimension knows we have electricity, right?”

Not Normally this Para.

Uh-oh. I need to turn on the lights…

INSIDIOUS is one of the few modern horror films that is truly scary. Not many movies can hold your nerves hostage like THE EXORCIST or THE OMEN, but INSIDIOUS comes close, with atmospheric direction, blood-chilling sequences and lots of screeching violins.

A family with three kids moves into a rambling house in Middle America – the type with hardwood floors, high ceilings and a dark attic that practically screams, “Hey, look at me! I’m haunted!”

Patrick Wilson (WATCHMEN) is father Josh, Rose Byrne is mother Renai (sans her baby fat as Brad’s plaything in TROY, 2004). Their little boy Dalton (Ty Simpkins) has an accident in the attic and goes into a coma that doctors can’t explain. Months pass. When Renai tucks in Dalton’s little brother, he whimpers to her one night about comatose Dalton in the next room, “I don’t like it when he walks around at night.”

Written by Leigh Whannell and directed by James Wan (the twisted Australian duo who brought us SAW), INSIDIOUS kicks us in the ribs with classic horror iconography: loud noises, doors opening by themselves, apparitions, whispers on a baby monitor… some beautiful scares – like the unclear vision of the Dickensian boy through the window dancing to Tiptoe Through the Tulips. Only thing scarier is Tiny Tim.

INSIDIOUS channels POLTERGEIST fiercely – and though we might call that movie a classic today, even POLTERGIEST did get a little kooky in its third act. Remember all the Hollywood commotion in the final scenes, skeletons popping up in the pool, the house disappearing in some kind of vortex, and the elf woman with the voice that sounded like she was sucking helium?… So too INSIDIOUS cannot live up to its razor-burning first half, although it does retain enough ectoplasm for a wild ride to a satisfying surprise conclusion.

Like most horror films, INSIDIOUS does not survive its “explanation” phase. As per Horror Protocol, a suitably wizened old woman psychic (or medium, or charlatan, or whatever they’re called) provides the prosaic explanation behind Dalton’s coma: as the POLTERGEIST Helium Elf called the other dimension “The Light,” the INSIDIOUS psychic (Lin Shaye) calls it “The Further” and explains that Dalton is actually astral traveling there, while demons are trying to use his inert body as a vessel to squeeze their bad selves into our dimension…

Which brings up all those usual questions I have for psychics, mediums, charlatans, whatever: Why don’t the demons just come through and be done with it, instead of poking around half-heartedly by leaving bloodied handprints on sheets and speaking through baby monitors? Are they trying to possess Dalton? Is he going to turn into a maniac axe-murderer inbred hillbilly? Why murder people if they only wind up in heaven? Isn’t that undermining your whole demonic task of bringing them to hell? Why bother “scaring” them at all? Wouldn’t demons from another dimensional plane consider simple Earthbound scares below their dignity? And in the noisy climactic scenes, ghosts try to cross into this world by busting out of a closet – and a man obstructs their paranormal entrance into our dimension by holding the closet door closed! Really? That’s all it takes? I thought ghosts could go through things… Can we get a Demonic Infiltration Rulebook up in this haunted hizzouse? 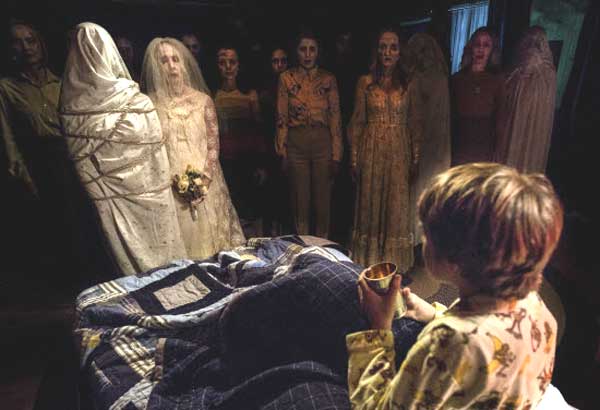 “Are you people nuts? Go take your Republican Convention somewhere else!”

And then – the perennial séance. Why in the dark? Does the absence of light really affect inter-dimensional contact? Human eyes can only pick up a miniscule section of the electromagnetic spectrum – between 4000 to 7000 angstroms – that we call “visible light,” so how could it possibly affect entities that can obviously communicate along a much wider bandwidth (and who are from a dimension where everything is supposedly so frickin’ bright)? I’ll tell you “why in the dark?” Because all those unsophisticates who handed down ghost stories from yore figured it would be scarier. How I love scientific explanations…

Writer Leigh Whannell plays one of two paranormal investigator dorks, whose funny appearance in the film is at a point where some levity is welcomed after heart-skipping scares – but his presence also presages the wizened woman and the unneeded “explanations.”

From the outset, the main drawback of INSIDIOUS is its PG-13 rating (we know they’re allowed to say “fuck” but once and are only allowed concepts that won’t overwhelm your average Lindsay Lohan fan), so with that hobbling, we realize what a good job the filmmakers did to make those hairs rise on your mammalian body. Point the finger at Joseph Bishara‘s eerie, evocative music.

Funniest (or most ignorant) by-product of movies like INSIDIOUS is that the slapstick mongoloids who call themselves “ghost hunters” notice all the made-up “paranormal” detection devices onscreen and believe that they can actually construct this bogus equipment – at the very least, name some glorified toaster the same name as that apparatus in the movie and presto! Instant Ghost Detection Device! Which says more about the pants-wetter who is using it than the device itself.

The first half of the movie gives you The Fear – that notion of the inexplicable; half-seen visions with no point other than an abiding alienness; the second half is for ghost hunters with weak bladders (that would be all of them, no?).

If I, a nullifidian cucumber far above the superstitious beliefs of afterlife, angels and demons, needed to sleep with the lights on after this effective movie, I shudder to think how hellish this movie must be on those pants-wetters. Look behind you, ghost hunter. It’s waiting for you in the dark.