When one of the world’s largest international banks is discovered brokering covert arms deals with China and the Middle East… well, who’s really surprised these days? 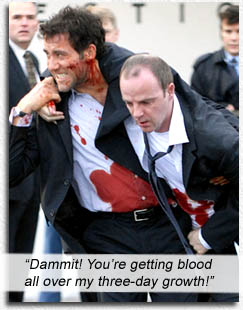 In THE INTERNATIONAL, it seems everyone is. Louis Salinger (perpetually unshaven Clive Owen) and Eleanor Whitman (Naomi Watts, sporting the most atrocious American accent since Gerard Depardieu) are international police who must have just arrived from Bizarro World not to realize that corruption at the highest levels is the jugular upon which the honest world suckles. The movie SYRIANA conveyed terrifyingly and succinctly how Corruption makes the world turn: “Corruption is our protection. Corruption keeps us safe and warm. Corruption is why you and I are prancing around in here instead of fighting over scraps of meat out in the streets. Corruption is why we win.”

So in the grand scheme of bringing justice to those who operate above the law, THE INTERNATIONAL is a no-win. Clive Owen is the nominal Good Guy (an obsessive, disheveled, loose cannon working for Interpol) and Ulrich Thomsen is the nominal Bad Guy, a slick, Euro CEO for the International Bank of Business and Credit (IBBC), whose amorality is tempered by his being a family man.

To eradicate the cancer that is Big Corp would take a lot more than one man taking down one other man.

As flying camera pans languidly caress the modern architecture of Berlin, Italy, France and New York, Salinger and Whitman run around a lot looking for people to blame.

It’s all very covert and one big fat coverup, but there is a major breakthrough when Salinger and Whitman discover the IBBC has a hired hitman on the payroll – whom they call The Consultant – who has just assassinated an Italian dignitary. Again with the incredulity: Imagine that?! A bank using an assassin for their hits! Well, who else would they use – a baker?

And when the four IBBC owners/conspirators meet online and decide, “We must cancel our contract with the Consultant,” we know they’re not talking paper trails.

Armin Mueller-Stahl is one of the four IBBC “conspirators” who tells Salinger he cannot stop the bank within his idealized scheme of justice, he must go outside the law – but if Salinger does that, the very justice he fights for will be moot. “Everyone is involved.” The govts of China, France, Russia, all so interconnected to world trade that the corrupt IBBC is – as they say in 2009 America – “too big to fail.”

The Italian dignitary (Luca Barbareschi) gives the most profound speech in this movie, much like the “corruption” speech from SYRIANA:”It’s about control… the IBBC is a bank, their objective is not to control the conflict, it’s to control the debt that the conflict produces. The real value of a conflict is in the debt that it creates. You control the debt, you control everything. This is the very essence of the banking industry – to make us all… slaves to debt.”

(I found it amusing that the DVD cover shows a big bloody gash across Owen’s face, with the rest of it airbrushed. I mean, why not leave his face as rugged as it usually is; it would lend more cred to the gash, rather than looking like a cheap stain on a Teen Model With No Pores.)

Directed by Tom Twyker, written by Eric Singer (Hey! Isn’t he the drummer with KISS?), THE INTERNATIONAL has no resolution. It is unsatisfying because the criminal in this case – the IBBC and its CEOs – are too arterially networked into the world markets to be affected. When one of the conspirators is killed, the IBBC simply grows another Hydra head and goes on to post record profits…

In the real world, we know that nothing like this story ever happens… it’s much worse.