If you care about whether burnt-out political insurrectionists from fictitious African countries are assassinated or not, this slow-moving thriller is for you. 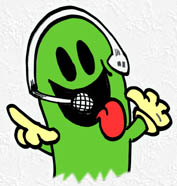 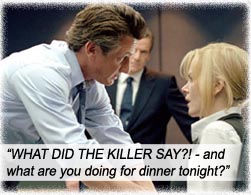 Otherwise, you will watch THE INTERPRETER with one question dogging your suspension of disbelief: “How does a startlingly luminous beauty like Silvia Broome (Nicole Kidman) avoid being flirted with by every single male she comes in contact with through the course of the movie?” Save for some sappy professional innuendo from a weepy Detective Keller (Sean Penn), she drifts effortlessly through the story with nary a whit of attention directed at her by any male persons, let alone the surreptitious askew glances we men have raised to the level of fine art.It is not a case of being miscast – beautiful, intelligent women abound in higher echelons – it is a case of casting such a visual magnet and then making every male in her vicinity treat her as casually as they would Kathy Bates. We men know for a fact that women with the looks of Kidman rarely make it five feet in the real world without some ball-bearer bearing balls-down on her with the pretense of aid or weather chit-chat or holding a door open in the Grand Scheme of cultivating her favor to Lay That Pipe.

For this role, Nicole Kidman was indeed “too” beautiful. No matter her actions onscreen, or the dangers that befell her, the only emotions coursing through that of the male gender are, “God, she looks cute doing that.”

And that’s only the first discrepancy. THE INTERPRETER is so riddled with callous discrepancies and glaring flaws that it completely loses all coherence before we have time to realize how boring it is.

It’s hard to believe director Sydney Pollack is the same man who brought us THREE DAYS OF THE CONDOR (1975), TOOTSIE (1982), or THE FIRM (1993). Sheer laziness pervades this film: after Broome hears the assassination plot, she runs from the building – one minute earlier, she had walked in past a security guard, who is not there when she runs out. Why? Because it negates the problem of him asking her why she is exiting so desperately, and then running back in and finding the conspirators himself.

Detective Keller actually raises the point of why conspirators to an assassination would discuss their plan in a room full of microphones. This question goes unanswered, not because the riddle is solved, but because this abject stupidity was needed to ignite the plot in the first place and was therefore a Sacred Untouchable Movie Riddle.

Another example of laziness is the translation scene between Matobon and American officials. Halfway through this scene, with dialogue overlapping untidily as Broome translates, the Matobons start speaking English, to the great surprise of everyone present. Why? Not as a plot reveal, but to avoid the continuing clunkiness of the overlapping translation dialogue.

Then there is the scene where Broome picks up her scooter from the auto shop and simply rides straight out into traffic without looking in any direction or pausing at the curb – while this may be regarded as a usual way for hot chicks to drive, it was another example of the carelessness with which Pollack breezed through this endeavor.

Secret Service agents surveil Broome, yet are utterly unprepared when she hops on a scooter and loses her tailing car in traffic, the agent driver frustrated and surprised that she has a scooter! They’ve been surveilling her for days and didn’t think to have a bike agent ready if she decided to go somewhere?

Catherine Keener plays Keller’s partner, and for the first time in her career, pulls off a mature performance that doesn’t reek of irritating narcissism.

The plot takes a few minor twists in an effort to keep things interesting, but mostly to keep things illogical. As tragedies mount for Broome, all we need do is look at her immaculate hair to realize that anyone who takes that much care over her coiffure can’t be hurtin’ all that bad. Kidman, with the pallor of a poreless zombie, just looks too hot to be doing anything in this movie and Sean Penn would much rather weep over irrelevant backstory about his dead wife, than catch presidential killers – solving assassination plots don’t win you Oscars. Crying does.

Maybe Broome wasn’t the pussy after all…