Gere Up For Double The Love.

Whadaya know: if you’re skidding headlong into a death-tastic car accident, and you happen to be Richard Gere, your life does flash before your eyes – well, your love life, at least. If you’re Richard Gere. 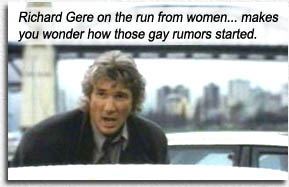 INTERSECTION is almost a Chick-Flick version of MEMENTO, as Vincent (Gere) reminiscences back through his life of juggling his lover (writer Lolita Davidovich), with his ex-wife (business partner Sharon Stone), adoring daughter, and a successful architectural profession.

The plot hinges on who Vincent will choose as his life’s love. Weaved throughout are scenes of a unique clock (which Vincent bought for his lover), with a ball-bearing winding mechanism which tilts one way and then the other, metaphorically mirroring Vincent’s indecision.

The body of the movie, consisting of scattered vignettes, is rife with clues as to which of the two women would be his ultimate choice: Stone’s architectural planner (who, in her most passionate moments with Vincent, exuded a clinical iciness that he chose not to perceive due to her social positioning and surface charms), or Lolita’s columnist (independent, yet clutching at Vincent for primacy of attention).

His moment of clarity, alas, comes too late. But no matter – he’s Richard Gere!