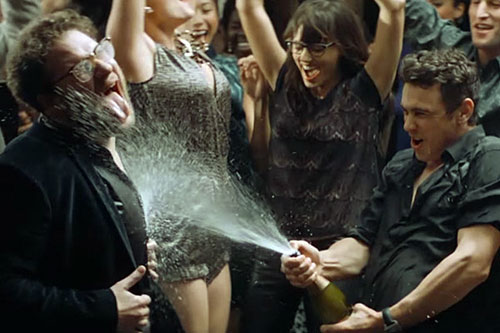 The bromance escalates: It’s a metaphor NOW – but wait till tonight…

Two American talk show numbnuts score an interview with the dictator of North Korea, Kim Jong-un, and try to assassinate him in the process.

It’s THE INTERVIEW, banned by everyone gutless enough to believe the threats of North Korean nationalist hackers who said they would bomb theaters that screened it. How they planned to do that from their mother’s basement was a problem for the CIA to solve.

But Western capitalism won out in the end and the threat of losing millions was even more dire than the threat of losing a few limbs in a theater explosion, so Columbia Pictures somehow found a way to jam this mediocre media down our cortexes; he says, as he watches the movie from an alley while it’s screened on the back wall of a speakeasy, while holding a garbage can lid up to his face to ward off any shrapnel debris from potential explosions…

Seth Rogen and James Franco partner in bromantastic fury as producer and talk show star of Skylark Tonight, a TV show that specializes in populist dumbed-down television for wankers (in other words, American TV). Desperate to raise the integrity of the show, producer Aaron Rapaport (Rogen) books Kim Jong-un (a fan of the show) for an interview with Dave Skylark (Franco). In North Korea.

The CIA (headed by Lizzy Caplan) swoops in and orders them to assassinate Kim (played by Randall Park). Now this is where the movie earns the first of its many kudos. Rapaport (and later, a North Korean official) points out that killing Kim is not a cure-all; that someone else will be elevated to Supreme Leader and the sadistic, dictatorship regime would continue. Another solution is found – after all the poison has been lost and before Kim’s trigger-itchy guards kill them – and it all happens during The Interview itself.

Now people, it’s a Seth Rogen comedy (written by Rogen, Evan Goldberg and Dan Sterling, and the second directorial effort from Goldberg and Rogen after THIS IS THE END). How deep and disturbing can it really get? Filled with talk of honeypotting and honeydicking, sex jokes, dick jokes and butt jokes (then more sex jokes, dick jokes and butt jokes), movie features a portrayal of a real life personality, but a personality so famous and publicly caricatured, it’s no worse than Trey Parker and Matt Stone poking fun at his dad, or Tarantino blowing up Hitler, or WATCHMEN having Nixon in office for five terms. It’s a satire, a parody, a jape, a fiction.

That doesn’t stop those nonces in their mama’s basements speaking on behalf of the North Korean dictatorship (whom I’m sure were as surprised as the rest of us when they were identified as the cyber terrorists) being offended like the illiterate unhinged uneducated humorless twats they are, and threatening to kill in the name of their beloved communist ethos. (The hackers call themselves The Guardians of Peace, unwilling or too ignorant to see the irony.) It’s always unfortunately the most vocal who are the least in number and the most dumb, who illicit the biggest reactions, from the biggest dummies. Even worse, they hacked Sony Pictures and leaked some upcoming movies. Jesus, Mary and Jehoshaphat! Now they’ve gone too far! Heaven forbid we see the new James Bond film before they finish rendering the CGI!

Therefore, the world events this movie stirred colors our perception of the movie. We’re expecting some grandiose insult to the North Korean culture, a searing indictment of Juche ideology, an intellectual dismantling of the Kims’ cult of personality. And we get an assfaced comedy. By Seth Rogen. [Seth Rogen laugh: uh-uhh-uhh-uhh-uhh-uhh-uhh] Joke’s on you, mama’s basement boys.

Can James Franco overact this much and get away with it? Maybe that’s what the terrorists are so miffed about? They try to poison Kim with ricin (maybe this reminded the terrorists that BREAKING BAD is over?). Aptly named Diana Bang plays a North Korean official who bangs Rogen (I can see the terror in a fat Jew mounting a petite communist); and Anders from WORKAHOLICS gets to insult someone and hang out at a bar watching TV (the terror of making a lateral move from WORKAHOLICS). And it’s R-rated (for offhanded profanity and surprising gore, which is always considered a terrorist act by the Gutless MPAA, who in turn terrorize us with their inconsistent hypocritical dictatorial ratings system).

You know why this movie is dangerous? Because Kim Jong-un is such a cool guy! The gullible Skylark is taken in by Kim’s wiles, who paints himself as a tragic waif, misunderstood by his father and the people he presides over; propaganda smeared by the Western World undermining his sincere attempts at leadership (“You know what’s more destructive than a nuclear bomb? Words!”); propaganda over his godhood, which he denies (“Yes, I have a butthole, and I poop”); he’s just a regular guy with an easy smile, who likes basketball (–cough–Dennis Rodman!–), Katy Perry and margaritas. And lots of pussy. Hell, even I’m getting to like him…

Now that THE INTERVIEW is being screened in various outlets, see how it started World War III? See how the cyber-verse was utterly decimated? See how everyone lost their jobs and had to forage for food and shelter on the unforgiving streets?

Oh, none o’ that happened? Joke’s on you, people terrorized by terrorists (aka basement boys). Everyone’s having a laugh at the expense of everyone else. And for a comedy, that spells success.