The question will always be: Once you get INTO THE WILD, what do you do there? Of all the people to ask this pertinent, profound question – it is Vince Vaughn. 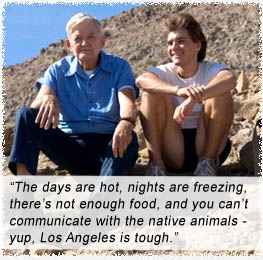 From the book of the same name by Jon Krakauer (who also wrote Into Thin Air), Sean Penn directs Emile Hirsch as Christopher Johnson McCandless (Feb 1968 – Aug 1992), who shucked off his earthly possessions, did a Henry David Thoreau and flitted into the wilds of Alaska to live off the land. Vaughn plays a farmer employer that Chris (Hirsch) meets along the way.

After graduating as an ‘A’ student from Emory University, Chris stuns his parents (William Hurt and Marcia Gay Harden) and surprises his sister by giving all his money to charity, burning his Social Security card – his strongest link to an identity in the “civilized” world – and setting out on foot with nothing but a backpack and seeming enochlophobia (fear of crowds).

He renames himself Alexander Supertramp and travels from Arizona, kayaking illegally down to Mexico, then trudging/hitching up to Alaska. Along the way, he meets a cast of characters who each tells Chris, or at least fears, that his quest to isolate himself will end in tragedy, and unwittingly offer him three staples of “civilization”: Vaughn offers money – the steady job; a hippie commune (with Brian H. Dierker and Catherine Keener) offers female companionship (in the form of waif Kristen Stewart, who knows how to woik cut-offs); and a doddering Hal Holbrook tearfully offers family, asking if Chris wouldn’t mind being adopted as a son.

In retrospect, we see that Penn compresses McCandless’s journals to present us with only these clichés, but while viewing, the characters are oddly compelling. We are rooting for McCandless to make his journey, yet we also want him to experience the fullness of life as WE have become accustomed to it (i.e. take the new car your father offers to buy for you; plonk the sexy chick before you walk away; at least take your Blackberry, dude…).

For anyone raised happily in First World society, it would take a lot to convince him or her of Chris’s determination to get away from it. Emil Hirsch sells Chris’s wanderlust state of mind and body completely.

I went to the woods because I wished to live deliberately, to front only the essential facts of life, and see if I could not learn what it had to teach, and not, when I came to die, discover that I had not lived.
— Henry David Thoreau, Walden.

When Chris arrives in Alaska, the searing beauty and welcome quietude lasts only as long as it takes to realize that the land is unforgiving to idealistic puny humans who were not born and raised into it. Chris finds an abandoned “Magic Bus” and sets up a cozy HQ from which to drink in grand vistas, hunt and store food, but soon comes to realize the folly of drawing all his wilderness knowledge from books.

Chris narrates the realities of killing a big animal for food – a moose; in a disturbing scene, he is one man with a small knife, trying desperately to cut it into small pieces, but he cannot cure and cook the meat before the flies leave it crawling with maggots, making the death of this magnificent beast worthless. He writes, “One of the greatest tragedies of my life – shooting the moose” and tearfully relinquishes it to the wild, watching the wolves and bald eagles pick at the flesh. “… clearly felt the presence of a forest not bound to be kind to man. It was a place of heathenism and superstitious rites, to be inhabited by men nearer akin to the rocks and wild animals than we.”

Chris must have been one wicked misanthrope to abjure the embrace of humankind. Yet there is hypocrisy in people who wish to excise themselves from the world of man and yet leave behind a journal for the world of man to read. Writing is the provenance of creatures who perceive a future; anyone who engages in lyrical flourishes like the above passage is writing for other people to read them eventually.

And we see that this is true, for Chris fully intended to return to the world, his Walden experiment having run its course through his veins. But when Chris realizes life is only good when shared, it is too late. That unforgiving forest Chris wrote of has sprung its cruelest trap – the path across a raging river back to civilization has become impossible to navigate. He writes (still fantasizing about that book deal, we presume), “I have literally become trapped in the wild.”

Penn is unflinching, showing us not only the grandeur of Chris’s adventure, but also its fatal mistakes. Chris eats a poison plant by mistake, that suppresses appetite, thereby killing its victim slowly. For author Krakauer to reconstruct Chris’s last days from journal entries and other evidence, Chris must have been a pathological writer to document the symptoms of his death even as it slowly overtook him, Emil Hirsch doing a Reverse RAGING BULL and turning skeletal before our eyes, his final moments spent in agony – yet gazing up at the open sky.

I always wonder, with these wilderness guys, how an ailment like kidney stones, or a thorn stabbed into the foot turning it gangrenous, or – like Hanks in CAST AWAY – a decayed tooth, would make them feel about hanging out so far from drugs and busty nurses.

But in the film’s final narrated words of elation, Penn allows Chris the benefit of the doubt that he enjoyed his life to its end. Free. “What if I were smiling… and running into your arms… would you see then… what I see now?” Whatever he might have meant by that enigmatic passage – that every person’s perception of happiness is wildly different – Chris, through this movie and Krakauer’s tribute book, achieved what I believe was his most joyous goal: immortality.