George Clooney hasn’t been this funny since he was Batman. 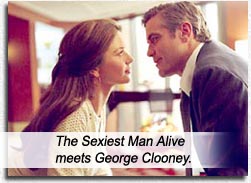 Eschewing “romantic comedy” cliché (Cary Grant’s 40s and 50s farces have a lot to answer for, as the progenitors of the genre), Miles seeks not Disney-flavored, unconditional “love,” but a covenant with a like-minded sociopath. Initially, his incongruously hilarious line, “You… fascinate me!” issues from a mindset we cannot divine, but as Miles and Marilyn maneuver around each other’s fortunes and pre-nuptial contracts, we realize that he is seeing his own ruthless, capitalistic reflection in her – and wants a piece of it.

With savagely comedic interjections by Billy Bob Thornton as a talkative cowboy oil baron, Jonathan Hadary as Concierge Baron Krauss von Espy, and with Clooney’s piston-popping delivery and a visual sheen lifted straight from Soderbergh’s OCEAN’S TWELVE (demonstrating how great an influence an Art Director’s hand plays – in this case, Tony Fanning’s on both films), INTOLERABLE CRUELTY is a black, shamelessly flamboyant gem.

For us to ever laugh this hard at George Clooney again, he’ll have to make another intolerable BATMAN.