INVASION U.S.A. is made for one purpose. The government will tell you it’s to promote the draft, but the draft is only a euphemism for domestic terrorism.

What else would you call spreading fear through media; terrorizing the populace into bowing Head Down Ass Up to the American government, or their lives would be ended by Russians? 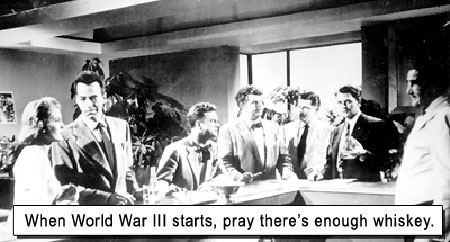 In this Cold War propaganda dog-whistle to maroon-necked patriots, we see a group of pasty white Americans gather in a bar, where a smug asshole television reporter (Gerald Mohr) is asking everyone’s opinion on the Universal Draft (that’s where not just people are drafted, but factories, companies, everyone and everything becomes government controlled, to contribute to the war effort. In other words, communism). Communism being the second dirtiest word in American media, movie slings it to great effect, having all the barflies disparage its stank when the government came calling on them to contribute their Texan beef and their doughy tractors. Yet there is one ominous patron with an enigmatic accent (Dan O’Herlihy, the Old Man in ROBOCOP 2; here, young, sexy, surfwave pompadour) who tells them all that wars are won by making sacrifices. He critiques their selfishness, swirls his drink and leaves. Suddenly, the TV news crackles with reports of 500 bombers approaching the United States…

INVASION U.S.A. might be the only American-made movie where America is attacked by another country – and loses. Oh, but it’s all a mass hallucination– what the Patrick Duffy?! That’s the only way it could pass the Idiot Gutless Censors.

After the news broadcast, we are treated to stock footage and execrably staged war scenes of America under attack (the process shots of paratroopers landing in front of the White House are hilarious); it’s the damned Russkies and they’ve brought their vodka and bad American-Russian accents.

B-story finds Mohr making time with the smooth blond he met at the bar (Peggie Castle), who walked in with some doughy guy, but leaves with Mohr. There might be a war on, but his call of duty is to see the blond Head Down Ass Up. He’s so slick and arrogant, Humphrey Bogart called and asked for smug lessons.

Reports of Russians in American uniforms storming the beaches – so the (snigger) “moviemakers” can just use stock footage of Americans storming beaches; the Texan farmer picks up his TV Family and gets swept away in a flood caused by Russian bombers destroying a dam; the doughy tractor-maker is shot when his company is infiltrated by a Russian window washer; a news anchor with a lisp reports that San Francisco is bombed all to hell, and he says the Russians dropped bombs on it as well.

A general tells the stubborn tractor-maker, “If your dealers are good Americans they’ll know that tanks are more important than tractors!” In which universe, General Fearmonger? As it happens, in a universe where COMMUNISM is the Great American Way!

Movie has the distinction of featuring both Lois Lanes from 1952’s ADVENTURES OF SUPERMAN (Phyllis Coates and Noel Neill), in bit parts as airline clerks. Their theatrical acting is worse than communism.

When movie ends with the patrons at the bar all snapping out of their collective trance (where they all presumably saw these same invasion scenes), everyone is cum-drenched in red white and blue, declaring their support for the war effort – mind you, the Cold War effort, as no major wars were being prosecuted at the time. This kind of dubious agitprop was constantly pushing the envelope of government encroachment. And due to their glad-mouthing, not one of the patrons or the viewing audience realizes the movie’s glaring contradiction: while advocating the United States needs a stronger military to combat communism, the process by which it proposes to stamp out that communism – is by instigating communism in the United States with the Universal Draft! While screaming “Go USA” in everyone’s faces, it’s saying GIVE UP your property, your work, your bodies, your children to the government – and we will let you die honorably for us. (!)

Head Down, Ass Up.