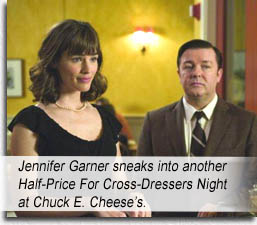 THE INVENTION OF LYING starts as a fantastic original idea, fleshed into hilarious absurdity by Gervais, then slips in the puddle of Romantic Comedy – and you know what happens when you hit your brain on that pavement.

One day, in desperation to pay his rent, Mark discovers he can lie. And the world becomes his oyster. In his ongoing quest to make Anna his squeeze, the movie just starts smelling like one.

On the truth gags, thematic possibilities are endless and writers-directors Gervais and Matthew Robinson, keep the early punches snappy, eventually escalating the film into a raunchy dig at organized religion. Then it just stops being funny – in direct correlation to Mark and Anna’s growing romance.

Man-eyebrowed Garner plays Anna as a shallow retard and it is perplexing as to why Mark would profess love for such a moron. Is that a worthwhile message? Love someone cos they’re hot? (The number of times weird-lipped Garner is told she’s pretty, I’m sure she’s starting to believe it.) Her recalcitrance in bedding him revolves around a very real genetic concern of not wanting short pudgy kids.

Mark tells her, “You’re the sweetest, most caring person I know.” He must not know too many people (with such annoying cheekbones). This sweet caring person just said she loved him but didn’t want to have sex with him for his physical appearance (she’s one to talk! And how exactly is that “beautiful on the inside”?). She had to dig in the deepest recesses of her malfunctioning brain just to find favorable adjectives for him, “the most interesting person I know, and fun to be with.” Wow, almost as intelligent as a goldfish. Really wanna spend your life with this muntoid? Tap her if you think she’s “pretty” but how could any self-respecting male marry a woman who regards him so menially? There is nothing that makes a man look like less of a sex candidate than to pursue a woman who thinks so lowly of him in the first place.

It becomes even more perplexing when Mark becomes rich and famous and still pines for the imbecilic bad-hair-day Anna, who relegates him to Just Friend.

Gervais shows us how deceit and lying must necessarily find their way into class-based society. In desperation, Mark lies to his bank that he has $800 in his account (when the computer shows $300). In this world devoid of lies, the teller apologizes for the computer error and gives him $800. Effectively turning the Orwell quote on its head, “In a time of universal deceit, telling the truth is a revolutionary act.”

Gervais shows us the sociological imbalance that motivated his character. That imbalance is behind every crime committed – in a society that aggressively keeps its haves and have-nots separated.

I find it odd that the film is allowed to portray Mark using his talent to get rich by stealing from casinos, yet the one instance he uses his talent to get it on with a stray chick, he finds it morally reprehensible and doesn’t go through with it. Why? Romantic Movie Protocol: he can’t be seen banging his days away while simultaneously courting the ugly chick.

Mark realizes that a little deceit helps people get through their day, from the insecure lady outside her office, to the arguing couple, to the old folks at his mother’s retirement home.

In a society with no lies, there would obviously be no religion. So when his dying mother (Fionnula Flanagan) laments she is headed for an eternity of nothingness, Mark lies that she is going to a place with mansions and no pain, to meet all her friends and be young again (while doing some excellent full crying, I might add). His untruth is taken as “gospel” and soon Mark is sought after as a messenger of The Man In The Sky. He ends up writing ten rules on two pizzabox cartons and delivering them in a “sermon” where the crowd corner him into explaining subclauses of the rules. These are the most funny and inventive segments of INVENTION.

The allegory is easy to see – for a sensible person – but since this movie’s audience seems as incognizant as the audience in the movie, I’ll spell it out: a person relaying a message from a Man In The Sky is a liar and all those who would listen to him are idiots.

Through his lying ability, Mark is soon regarded as a messiah, yet the ugly chick stays at arm’s length. When her feelings do change towards him, it’s because his social status has risen – but his status was achieved through deceit! There is literally no end to the paradox and hypocrisy. Like every romantic comedy.

Movie ends with an altar scene where Mark gives an 11th hour speech that makes your flesh crawl with its disinformation and 14-year-old conception of love. I mean, do you really want to marry a girl who is in the process of marrying another man right in front of you?

No surprise that he gets the girl in the end – but now he’s saddled with an idiot, an imbecile that he has to put up with for the rest of his life – and she can’t even cook! All for a little panty, which he could’ve used his talent to score left and right like Gene Simmons.

The real life irony behind THE INVENTION OF LYING is Ricky Gervais himself. In GHOST TOWN (2008) he was paired with stunning Tea Leoni; in INVENTION, with the widely-regarded-as-pretty Garner. Never mind the fact that these movie situations are as far removed from real life as Jennifer Garner is from pretty; these implausible fantasies have earned him actual power and status and driven Gervais’s real life allure… Bet there are at least two hundred chicks from Ricky’s home town who turned down the chubby wannabe comedian back before THE OFFICE broke like a tsunami – now he’s making them all regret their inborn gold digging animalism…

Power is SO sexy. Revenge is SO sweet.

And that’s no lie.