Morgan Freeman gets South Africa to cheer together in a funny accent. 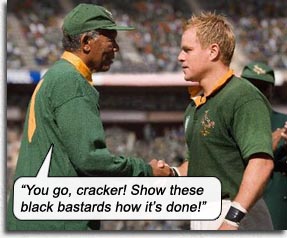 INVICTUS follows South African president Nelson Mandela (Freeman) in 1995 as he fanatically throws his support behind the national rugby team, the Springboks, using them as a symbol to unify his nation riven by apartheid. It was a long shot, to be sure; he placed his faith in a team which were notoriously good – at losing.

At least, that’s what this film portrays. Upon researching the history of the Springboks, they were quite a successful team, and only politics gets in the way of their competing in the World Cup through certain years.

The first I ever heard of Nelson Mandela was in a 1984 song by The Special AKA, Free Nelson Mandela. (I remember feeling a disconnect between the lyrics and the music video. The vocalist was singing about “21 years in captivity” yet the video showed people dancing joyously – as if someone had BEEN freed.) Mandela was obviously jailed not for some heinous crime, but because he did not see eye to eye with some political establishment.

In February 1990, Mandela (his aides respectfully use his tribal name “Madiba”) was out of jail and back in politics; by 1994 he was elected president, and immediately trying to unite the country that he loved, that yet imprisoned him. INVICTUS does not focus on the politics that landed Mandela in jail, nor his policies once freed – all it covers is the rugby (or, as it is pronounced in “Seth Efrica” – “regby”).

As he did with MILLION DOLLAR BABY, Clint Eastwood directs what seems to be a simple underdog sports film (screenplayed by Anthony Peckham from John Carlin’s book, Playing the Enemy), that is actually a more complex study of humankind.

Matt Damon is François Pienaar, captain of the Springboks (affectionately called Bokke by their fans) during a despondent slump, who can’t quite comprehend why the president is calling to meet him. (Maybe he wants him to stop using that distracting Seth Efrican accent?) Pienaar lives in a household with a black female servant, whom his parents don’t consider as worthy of a second thought. She tells Pienaar to alert Mandela to the poverty of her people, almost without a hope that Pienaar will actually speak to the president let alone discuss cultural disparities. Later, when Pienaar comes home with four tickets to the 1995 Rugby World Cup Finals (Springboks versus New Zealand’s All-Blacks), his father counts out, “For me, mum, Noreen (his girlfriend) and one for…?” The camera pushes in on the servant in the background, beaming. I shed a tear. (Don’t know what it is about the way Eastwood directs his later-period films, I’m always crying – I feel like Robert De Niro in ANALYZE THIS.)

INVICTUS continually goes where sports films rarely go – it is touching and poignant at every turn:

The rugby team visit Mandela’s actual jail cell, which was preserved in its state when Mandela was freed, as the Majestic Freeman Voiceover narrates the poem that kept Mandela going while in jail, Invictus (Latin for unconquered, undefeated; “…I am the master of my fate: I am the captain of my soul.”). Pienaar stretches his arms out – the cell’s width just over his armspan – pondering to his girlfriend, “I was thinking how you could spend 30 years in a tiny cell and come out ready to forgive the people who put you there.”

It is touching how Mandela’s black security detail, in being augmented by the previous president’s white security detail, accept working together in harmony after an initial hiccup. There is no subplot of the guards being nemeses or resenting their African head of security (Tony Kgoroge). I guess their quick acceptance and loyalty comes from the 20 of them sharing an office space no bigger than your bedroom. (Never enough chairs – someone’s always reading a report standing next to a guy who’s sitting.)

And the most sobbingest sob moment of all (at least, for us with De Niro genes) is during the final match, when the united country is listening or watching on TVs, radios, in diners, cars, at home gatherings, etc. and a lone little African boy pretends to pick up trash as he shuffles nearer to two security guards standing at a parked car listening to the big game on the car radio, turning his ear to the static, trying not to be intrusive. I am usually unmoved by sports movies – who cares what happens to these football hooligans? – yet Eastwood movies cry out with their brilliance in showing us people being human; this little boy, who yet feels pride for a country which has ostracized him through poverty, still wants a taste of what it’s like to be buoyed by a national event in a nation that ignores him. Like Mandela himself – a country that he loved, that yet imprisoned him.

Early in the story, when Mandela first walks onto a field to greet the Boks, there are boos audibly clouding the cheering. When he walks out at Johannesburg’s Ellis Stadium – the World Cup Final – there is only cheering. He had won. Anything from here would be gravy. And gravy it is as the Boks face down the fearful “kematha” haka of the NZ All-Blacks and their peerless man-mountain Lomu – and win the 1995 Rugby World Cup.

At Ellis Stadium before the Final begins, shades of 9/11 as Mandela’s bodyguards notice a 747 willfully flying directly at the stadium. The pilot tells his co-pilot, “I take full responsibility for what happens,” and we envision a political fanatic killing thousands with an aircraft impact, as the jet’s engines whine in a diving maneuver. The aircraft thunders overhead merely 100 feet above the topmost bleachers – printed on the underside: “GOOD LUCK BOKKE!”

Eastwood’s son Scott is Springbok Stransky, who played a jackass wigga in GRAN TORINO, but here kicks the winning goal.

We presume that had the Boks met the All-Blacks in their earlier days they would not and could not have defeated them, but by the time they met on the Finals battlefield after presidential and countrywide fervor, as Pienaar says, “We didn’t have the support of 60,000 South Africans – we had the support of 43 million South Africans!” Can anyone truly comprehend the energized frenzy they were imbibed with?

Like every sports movie, the raucous triumph is accompanied by bleating orchestra swell (music by another Clint progeny, Kyle Eastwood and Michael Stevens); I detest bleating orchestra swells, but can accept it if I attach it to the MOVIE’S triumph, not the team’s. Eastwood has crafted a film that could have easily tipped into seesawing sympathies between blacks and whites (something which Mandela himself was trying to eradicate), yet he mirrored Mandela’s message in keeping everyone equal onscreen without explicitly crowing about it.

As with Eastwood’s LETTERS FROM IWO JIMA, during the outro credits, we see shots of the real-life players on the field, the real Pienaar, the real Mandela. The pictures speak not a thousand words, just one, in many different ways – Unconquered.

Out of the night that covers me,
Black as the pit from pole to pole,
I thank whatever gods may be
For my unconquerable soul.

In the fell clutch of circumstance
I have not winced nor cried aloud.
Under the bludgeonings of chance
My head is bloody, but unbowed.

Beyond this place of wrath and tears
Looms but the Horror of the shade,
And yet the menace of the years
Finds and shall find me unafraid.

It matters not how strait the gate,
How charged with punishments the scroll,
I am the master of my fate:
I am the captain of my soul.