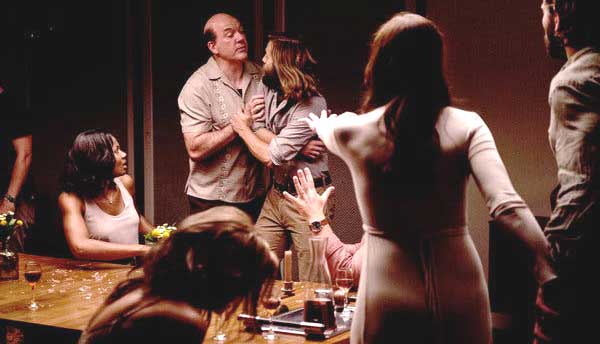 A game of Choose Your Bear goes horribly wrong.

If this is dinner, I can’t wait for dessert.

THE INVITATION is a coiled spring that explodes in your face just when you think it’s safe to leave the party unscathed.

Like the classic ROSEMARY’S BABY, or the recent THE RITUAL, the buildup of tension in what should be a common social setting ratchets THE INVITATION to its whiplash conclusion.

A dinner party with old friends… invited by your ex-wife and her new husband, in the house you shared with her before the death of your son…

Logan Marshall-Green is Will (looking oddly like Jeff Bridges in KING KONG 1976 with that Lebowski beard and unkempt hair), invited by his ex, Eden (Tammy Blanchard, looking like an older, voluptuous Michele Monaghan, wearing a long white thin dress that would be see-through under harsher light) to what was their family home in the Hollywood Hills, celebrating her return from parts unknown with her new husband David (Michiel Huisman). Will attends with his new girl Kira (Emayatzy Corinealdi), with a gang of old friends rounding out this long-overdue get-together.

Through excellent naturalistic performances, we feel the gang’s camaraderie, yet when Eden and David are out of earshot, the friends ponder on where Eden and David mysteriously returned from, the strangeness of their sudden invitation, and their probable agenda. The video presentation can’t be too far behind…

“Mommy, there’s either a Civil War General, a homeless person,
or Jeff Lebowski peeping into my room!”

Eden and David extol the virtues of a wondrous group called “The Invitation,” that expelled their grief (where, Eden says, she purged the pain of her son’s death). They wanted to “invite” their friends to look into the group. No, sincerely. And, No, it’s not a cult. And the uncomfortable level rises at least two notches into Amway.

Mike Doyle and Jordi Vilasuso subtly portray a gay couple; an excellent representation where neither man lisps or waves his hands outrageously, yet convey an intimacy toward the other in mature interaction. Director Karyn Kusama (GIRLFIGHT, 2000) should be commended for this point alone, a welcome departure from the usual fruity fare that lesser movies use as shorthand.

John Carroll Lynch as Pruitt once again proves there are No Small Roles, as a fanatic supporter of the pain relief camp; not one of the old gang, but someone brought into the fold recently by Eden and David. Pruitt is key in one of those scenes that should mean nothing – moving his car from behind one of the gang’s parked cars (Marieh Delfino), who leaves early because she is freaked out by the sexual turns a game of truth or dare is taking – yet as Will watches the car-moving from a window, something not quite right is happening in the driveway, obscured by hedges—Will’s reflection on events is cut short by David’s actual reflection behind him, startling him, “Can I talk to you?” Movie making at its finest.

There is another interloper to the gang dynamic – Lindsay Burdge as Sadie (like Hilary Swank, an anti-gorgeous, free-spirited wantonness and non-classical 70s-wench beauty), whom Will sees first in a darkened corridor, as if she is spying – but it’s not so dark that we can’t tell she is bottomless! Later, the way she bluntly propositions Will, we get the impression she is being used as bait for… something. (Gang dynamic to gang-bang! Yes please!) 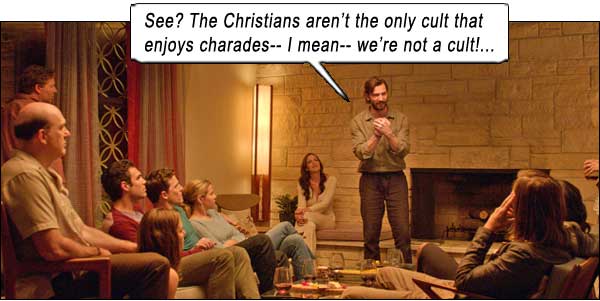 Written by Phil Hay and Matt Manfredi, THE INVITATION is one of those claustrophobic thrillers where, at many points, we consider that Will’s dread (“It’s not safe here!”) might just be all in his imagination. As he wanders his old home alone, he sees inevitable visions of his son and a younger Eden playing joyously in the now-somber rooms. When Kira tries to calm him, he tells her, “My son is dead. Where do I put that?” What a line! We can almost feel the loss throbbing in our own temples. Despite all his fibers telling him to leave, at this point, it might actually be cathartic to stay in the house and work through quashing that insurmountable pain.

And that’s how cults get you. Seeking out people at the nadir of their misery, to promise them succor. Scientology, Peoples Temple, Jehovah’s Witnesses, Christianity, Heaven’s Gate, Mormonism, Alcoholics Anonymous – they’re all the same, exploiting people’s fears and sorrows and insecurities. You can smell them coming a mile away. Unless your pain is too great.

We can’t even pinpoint why there is such dread creeping into the evening’s niceties – maybe it’s the way the house is decorated in mid-70’s chic, maybe it’s the way Eden is so secretive of her drug addiction, even though she is supposedly cured of pain; maybe it’s the way David locks all the doors and windows during the party, or the new bars on the windows, or the heavy impenetrable doors; maybe it’s the lack of phone reception, coupled with no landline; maybe it’s the way another friend, Choi, was meant to be here and hasn’t turned up yet… or maybe it was Choi’s voicemail to David hours earlier saying he was there…

An encounter with a wolf on the drive to the party foreshadows the stoicism that Will would harness in the film’s grim payoff.

Logan Marshall-Green has been quietly amassing a body of cool B-roles, slowly becoming the William Fichtner of this generation. Here, proving he has the nuanced leading man chops to take on the grace of an ex-husband, the grief of a father, and the violence of Amway.