The Mannish, The Myth, The Legend.

The Soviets dubbed British Prime Minister Margaret Thatcher “Iron Lady” as an insult. Now, in a swoon of reappropriation – like headbanger, jarhead, Dead-head, gay, Yankee, Obamacare – the epithet is reclaimed as a tribute.

If you watch THE IRON LADY with no prior knowledge of Margaret Thatcher’s policies, don’t worry, you’ll leave the movie the same way. On the other hand, if you intimately know Margaret Thatcher (1925-2013) – the politico, the myth, the mannish lady – you’ll think you’re watching a movie about someone else. 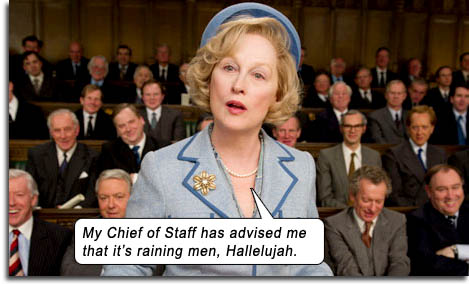 From the outset, let’s establish that Meryl Streep‘s performance as Margaret Hilda Thatcher, Britain’s first and only female Prime Minister (from 1979-1990), is miles above any other aspect of this film. (And she brings something that Thatcher never had – hotness.) As her 2012 Best Actress Oscar for this role attests, Streep is astounding to watch, at turns poignant, powerful, amusing, tragic and ultimately magnetic. It saves the movie from being the nothingness that it seems bent on being. You see, it’s not really about Thatcher’s life, and it’s not really a tribute – it’s more a study on how the most ambitious and powerful of us will inevitably reach that plateau of old age where nothing but memories of power remain. In this sense, it is a success, because Streep’s gut-wrenching portrayal of the Alzheimer-riddled Thatcher is moving and disturbing. However, as a historical document or biopic, THE IRON LADY is a failure.

Jim Broadbent is husband Denis Thatcher, whom Margaret is continually chatting with, but… he’s not actually there… The throughline of this tale focuses on Margaret’s relationship with her recently-deceased husband, how letting his specter go will allow her to get on with what little life she has left. Denis’s persona haunts Thatcher’s waking dreams and she sees him from all periods in her life, youth to old age. In this way, the movie can flit across different periods in Margaret’s life, showing her youth and political life.

In mentioning Streep’s performance, we must also commend the unsung heroes of films like this that portray the lead characters at various ages – the younger incarnations of most lead actors/actresses are usually so stunning that we take for granted their integral contribution to the finished product that might have faltered had they not produced such a grand performance. Harry Lloyd is Young Denis, intelligent, forthright, putting the moves on Alexandra Roach as Young Margaret, who channels the seasoned vet Streep brilliantly, with her alluring lisp and hazardous buck teeth.

Written by Abi Morgan and directed by Phylidda Lloyd, what little politics there is in IRON LADY is fast, furious and uninformative. We see Margaret’s rise to the top so quickly that we don’t even get the chance to laugh at the silly montage showing parliamentarians molding her into a Prime Ministerial figure (a la THE KING’S SPEECH 2010). We see the shouting matches in British Parliament (how in the name of Queen and Country did Britain ever rule the world with juveniles like that sitting in their highest offices?); and there’s a little Falklands Islands Crisis thrown in to keep the wardogs happy.

Unfortunately, most of the movie is spent with Thatcher milling aimlessly in a state of dementia, sometimes imagining she is still Prime Minister, yearning for her lost husband, descending into music video grand spunk railroad surrealism.

The very last scene is one of those magnificent Acting coups: old Thatcher looking out a window while washing a teacup. (She mentioned earlier, “I never want to die just washing a teacup” – she wanted more meaning to her final days.) But in this action, we see at last that she has taken the time to gaze out the window and hear the birds tweeting; in her autumn, though she may feel the mundane act of washing a teacup is beneath her, it has given her the time to stop and smell the roses. We see her notice the birds. Then the camera holds as she walks away from it, looks down a banister for someone or something that she can’t quite remember, taps it, walks off camera. It is Streep in all her glory.

THE IRON LADY has focus, but on the wrong elements that made Thatcher a great woman (whether you liked her or not, agreed with her policies or not, the records will show she was the Prime Minister of the United Kingdom longer than you were, and that’s enough to call anyone great). The way the movie places such emphasis on her husband’s wraith and his influence on her life, it would seem that what made Thatcher Thatcher was Denis. At one point, Thatcher sees herself on TV and laments, “I don’t recognize myself.”