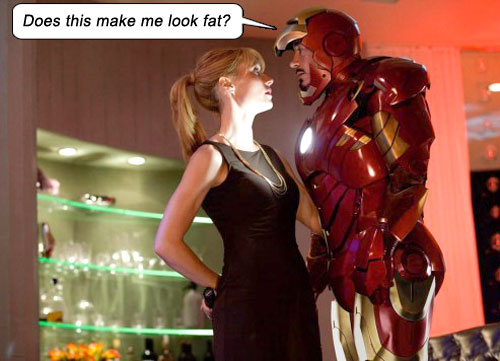 The first IRON MAN movie was a planet-crusher. IRON MAN 2, well, maybe it could crush a small moon or something. It’s still a full-fledged, fun-filled ferrous romp, but, like all superhero sequels, suffers from cramming us with characters and classic storylines in its desperate need to impress. My hole feels stretched. Not in that good way either.

IRON MAN 2 opens in exhilaration: over AC/DC’s Shoot To Thrill, Iron Man jets through night skies over city lights, camera/we on his steel shoulders, feeling the weight of the armor, the gut-thumping power of the afterburners in his boots, inhaling the burning breeze as he plummets like a missile into a packed amphitheater, landing onstage in a pose that can only be described as THOOM! You don’t applaud an entrance like that. You throw panties.

Machines clack his costume off his body as an Iron Chick chorus line (in tiny faux-metal undies) dances behind him. Billionaire playboy Tony Stark emerges (Robert Downey Jr., once again bringing his breezy brio) to open the Stark Technology Expo.

Half a world away, in a dank Russian lab with no windows, Ivan Vanko (scary Mickey Rourke, body-tatted like Motley Crue and still pumped from his WRESTLER role like a balloon float gone awry) plots revenge on Stark for Stark’s dad stealing tech ideas from Ivan’s dad. He becomes supervillain Whiplash and scares everyone by carving Tony’s racing car in half with his electric whips and showing off his puffy muscles.

Everyone wants a piece of the Iron. Garry Shandling, excellent as a snide congressman, impotently orders Stark – who doesn’t take him seriously – to turn over the Iron Man technology to the military; while sleazy Justin Hammer (Sam Rockwell), the government’s tech bitch, tries to duplicate the armor for military use, i.e. killing. (Of what other use is the military?)

Hammer allies with Whiplash to unleash an army of robots which ultimately keeps the effects team up all night rendering CGI. IRON MAN 2 shows us both ends of the crime spectrum – white collar (Hammer’s Machiavellian corporate moves) and blue collar (Whiplash bash, with enough macho metal punching to keep the simpletons happy).

Paul Bettany once again voices J.A.R.V.I.S., Tony Stark’s 3D hologram supercomputer that makes Bruce Wayne’s bat-computer look like Pong. It is everywhere it needs to be, doing everything it is told to do – like an ideal version of a chick. In Spielberg’s MINORITY REPORT (2002), when Tom Cruise flapped his hands in the air accessing information, it looked “futuristic” and unattainable, and though Stark’s holograms are miles above MINORITY’S technology, yet we feel that this kind of technology might exist today in some secret gub’mint facility. 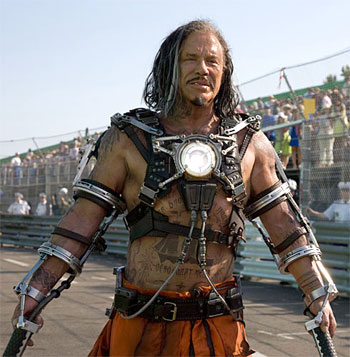 “Tony, you’re gonna play them drums good – or else!”

It’s amusing to see how naturally director Jon Favreau slots into blockbuster mode – remember this was the indie guy who made SWINGERS (1996) and hosted actors’ chats in DINNER FOR FIVE (2001).

Stark’s power source has been updated from the comic books: he used to plug into the wall like a regular old toaster, but here he has power cells that click into his chest piece – the same chest piece which keeps his heart beating yet is killing him softly through blood toxicity. Desperately seeking a cure, Stark nonetheless becomes fatalistic and bequeaths Stark Industries to his blond helper Pepper Potts (Gwyneth Paltrow, forever pining after the playboy she will never have), and stumbles upon the alcoholism plot point very conveniently.

And this is where the film stumbles as well. In the Marvel comicbook series, serious plot arcs like alcoholism gestate and develop over weeks or months (“Demon in a Bottle” was first published in 1979, then Stark fell off the wagon proper in 1983, forcing James Rhodes to don the Iron Man armor, precipitating War Machine), lending the story gravitas and “realism.” While in IRON MAN 2, Stark goes lush, Rhodey croaks the damning key line, “You don’t deserve the suit!” and commandeers the War Machine armor all in a few hot minutes, making it seem, well – ironically – like a comicbook. Or at least what people think comicbooks are – shallow, vacuous and unrealistic.

Stark creates a laser thingy that will simultaneously cleanse his blood and kill anything that he aims it at (‘IRON-ic’ huh?). When it flames on, Stark has to lever the laser to angle it onto his chest plate, which absorbs its energy. The laser shoots up the whole room in the process of moving it (simply to show off its lethal power to viewers). I guess Stark couldn’t have just angled it at the chest plate to begin with, being a physics genius an’ all…

The climactic battle between Whiplash and the two iron men is robbed of its impact by having to put Mickey Rourke into an Iron Suit and then on top of that ignominy, to have him remove his mask so that we can see him (the Spider-Man Mask-Removing Syndrome – ensure the ignorant audience knows who is behind the mask and then ensure the dumb dumb dumb audience can see the emotions on his face).

Despite its overwrought overpandering, from its titanium thunderware to its tiny metal underwear, IRON MAN 2 delivers, but says nothing we haven’t heard before in loud metal clanks.

Oooh, lots of hype and hullaballoo. Y’know, I never saw an ad for this movie – only one bajillion ads for other products that all had tie-ins, sponsorships and crossover deals with the corporate pigs who run the studio that released this movie. Hope it’s as good as Burger King and Audi and LG Electronics and 7-Eleven all say it is…

I wrestled for a long time with the problem of why IRON MAN 2 is not as effective, nor as compelling a film as the first one, and I realized: this A-list feature film falls into the shark-jumping phenomenon of the Cousin Oliver Syndrome – introducing new characters to replace well-worn ones. But this is only the second IRON MAN movie – we haven’t yet grown bored of the original characters! And none of them have aged enough to look as bloated as Cindy Brady.

I’m sick of them telling me that I’m sick of characters – when I’m not! I would have loved more scenes with Sam Rockwell spouting his inimitable patter; would have relished more turbo-charges like the opening flying scene, or that scene in IRON MAN where he flies to the Middle East and singlehandedly mows down hostage-takers and a tank, calmly, efficiently, not with all the Eurovision Song Contest bombast of this second film and its millions of metal men.

And come on! What we wouldn’t give for more Russian-tainted cheese with mighty Mickey and his puffy muscles!

“Have city buses there to ferry people to operating lines.”

During the evacuation of Stark Expo, this is Pepper’s directive to a cop, a flatfoot who obviously has NO AUTHORITY to carry it out. This is one of those irritating pointless lines that treats us like the melonheads that moviemakers think we are. It just – takes – up – space. Like that looped line in STAR WARS: “Holding her is dangerous. Word of this gets out, it could generate sympathy for the rebellion in the senate.” It means absolutely nothing! Yes, the cops are assisting Pepper because she’s the CEO of Stark Ind., but that lowlife grunt has more chance of winning the lottery than carrying out that pointless directive.

Who’s he gonna call? The mayor? The governor? City Buses Inc.? Never mind the “extra” buses, how about making the REGULAR bus service run on time to begin with? Extra buses? Can I have a little Red Tape to go with my government-run botchko? And how are most bus drivers meant to drive in to work and pick up their buses with all that chaos on the streets? While others would simply veto the work because they’ve already done too much overtime with the Stark Expo in town; while others would strike for overtime, while the company will claim that during emergencies they aren’t legally bound to pay overtime; and then the court cases would start… And are the REGULAR bus routes just commandeered to accommodate screaming assholes running from Whiplash robots?

“I’m coming home from a long day at work, driver. Why are we re-routing? Can you just drop me off at my usual stop, driver?! What? We’re going to the other side of town?! Fuck you, driver! Who gave this order? Pepper Potts? And some flatfoot desk cop? Holding her is dangerous. Word of this gets out, it could generate sympathy for the rebellion in the senate.”