Man of Steel, Ethics of Plastic. 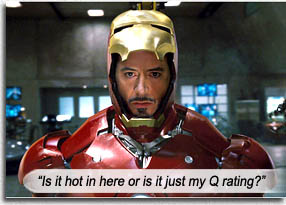 IRON MAN is a steel-belted planet-crusher of a film; alloy feet on the ground, red-and-gold armor streaking for sub-orbital skies. Based in a reality close to current, like the shrapnel lodged in Tony Stark’s chest, we feel it close to our heart… technology, physics, corporate backbiting, intimate asides… and a self-made hero that speaks in tongues to our wild fantasies of power.

Not just for 14-year-old boys.

Robert Downey Jr. is Tony Stark (the finest counter-intuitive casting since Michael Keaton as Batman), an all-American, arrogant, insouciant, egomaniacal billionaire playboy weaponry wizard, who sustains a shrapnel wound in Afghanistan (comicbook lore tells us a land mine in Viet Nam; movie places Stark in a current non-essential conflict), imprisoned by generic Arabs and forced to make a WMD for them, instead designing an armor suit, first for escape from his oily-complected captors, and then as avenger (wink wink) against his own weapon creations and the corporate backdoor deals that cede those American weapons into oily-complected hands.

Departing considerably from comicbook canon (as all this genre must do to compress decades of legacy into two hours), all the familiar characters are here, but tweaked: Jim Rhodes (the excellent Terrence Howard) is not just Stark’s pilot, but a high-ranking air force officer; Pepper Potts (bland yet moderately cute Gwyneth Paltrow) is Stark’s yearning Girl Friday, who sees the parade of fluff through Tony’s bedroom as a prelude to her ultimate spanking; Obadiah Stane (an uncharacteristically sinister Jeff Bridges) is not a corporate competitor but in Stark’s trusted inner circle, making his betrayal all the more treacherous…

Directed by Jon Favreau (Vince Vaughn’s wife and generally staid actor/director), and screenplayed surprisingly well by its four writers (Mark Fergus, Hawk Ostby, Art Marcum, Matt Holloway – four-writer films often suffer spoiled broth), IRON MAN takes its time focusing on the man inside the metal, rather than the mayhem the metal man musters. (Can I have a prize for that one?) 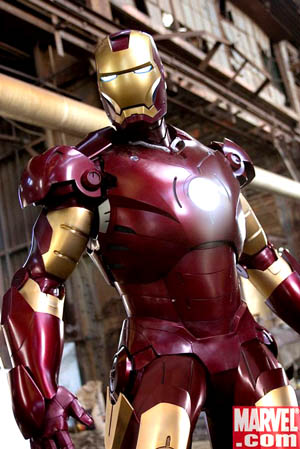 In captivity, a fellow prisoner, Yinsen (Shaun Toub) creates an electromagnet to keep the shrapnel from entering Stark’s heart, which Stark refines into a glowing “reactor” or something, forever to remain his albatross – and simultaneously a cool superhero chestpiece.

Yinsen turns Stark from unrepentant wardog to humanitarian avenger by telling him of his “life’s work in the hands of these murderers” (an enemy missile landing near him in battle, clearly marked with his company logo, his weapons stockpiled in Arab caves).

Firstly, let’s get the “murderer” definition straight: when Stark shows off his death-dealing toys in callous arrogance (“Respected or feared? I say, Why not both?”), he merely echoes the stance of the Amerikan Military War Machine (another wink wink to you fanboys), who also believe the “best weapon is the one you only need to fire once.” Who are the murderers again?

Secondly, Stark may be angered that his weapons are in the hands of these Movie Arabs, but when you’re in business, who else do you sell to, but those who demand and buy your product? A business genius like Stark should know better than anyone how the supposed “enemy” market is the house of sand the Amerikan military economy is built upon. When it comes to killing for profit, Amerikan ethics are quite, quite plastic. Who are the “murderers” again?

The first taste of the crude, silver armor (affectionately, the Mk-1) is magnificent. First appearing in Tales of Suspense #39, March 1963, this armor is forged by Stark while ostensibly creating a WMD for his Arab captors. Though the ’63 comicbook version now looks like a clown suit next to his red-and-gold juggernauts, the movie gussies up the suit with mechanical ganglion to lend it cave-cred. And in this roughshod mechanical man, Stark escapes the Arabs like a runaway tank.

Back in “civilization” Stark turns his focus from corporate warfare and weapons design to one project – his new armor. Meanwhile, Jeff Bridges scares us with his shaved head and overbushy beard.

Stan Lee’s cameos are getting better and better – this time, he’s Hef.

Seeing Stark create and test the powers of his technological marvel is half the fun of this origin tale – and when the full armor suit is eventually revealed, it is the sexiest beast this side of Optimus Prime! Though it is obvious this production has enough budget to overdo effects, CGI is used as sensibly as Ridley Scott used it in GLADIATOR – to enhance the story rather than to blow our minds with cheap shots. Seeing Iron Man outfly combat jets and take on tanks is action enough – it was a joy to simply see this icon from our comicbook past in real life action. AND – the worst part about Doctor Doom in FANTASTIC FOUR was his voice remaining the fruity scientist’s drawl even when he donned the mask – but when Stark slams on his iron man – yeeees! – he has a Vader thoom!

We have CGI to thank that Favreau didn’t put Downey in a rubber suit and dub in clanking foley. And with the armor’s complexity, it is only logical a machine should suit him up – and only CGI could render that machine, rather than having to see him pull on his gleaming jeans one pants-leg at a time.

The CGI only falls overboard once, when Stane dons the giant Mk-1 armor (aka Iron Monger) to battle Iron Man in the final scenes, the movie suddenly turning into TRANSFORMERS 2: ELECTRIC BOOGALOO for a bad second. A small hiccup, along with other small hiccups, like Stark revealing he is Iron Man at film’s end. Originally, Iron Man was played off as Stark’s bodyguard for years, yet there is only a passing allusion to this strategy in the final few minutes.

In one comicbook thread in the mid-80s, Stark fell into alcoholism and Jim Rhodes took over the armor and tooled about for way too many episodes, spawning the War Machine spinoff. The movie cheekily intimates Rhodes in the armor when he spies a secondary suit, hesitates, then says, “Next time, baby!” Unlike this jovial take, that comics thread was a depressing time and I didn’t like it one bit, but then, I suppose alcoholism always is depressing. To everyone involved – even innocent boyish readers. The movie doesn’t explore this thread, but Favreau has hinted at a sequel falling down the stairs inebriated without its iron shirt on.

In the final cut, no one will notice the ethics paradox – it’s not for this movie’s target demo to tangle with. IRON MAN is still one of the great superhero movies. Just remember to stay until after the credits – Samuel L. Jackson (in characteristic super-cred long black overcoat) is Nick Fury of S.H.I.E.L.D., not looking one bit like his comics counterpart except for the eye-patch, talking crazy to Stark about “the Avenger Initiative”…

The movie opens with AC/DC’s Back in Black. And we’re played out by Sabbath’s Iron Man!

Not just for 14-year-old boys. But it’ll sure make you feel like one. 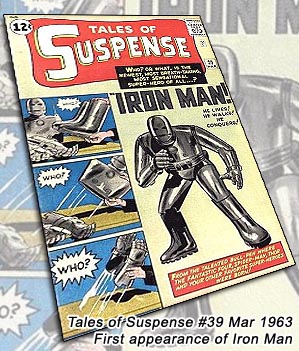