Attack of the Clones.

You know what they say: Every man is an island. Unless he has a clone. Then he’s an archipelago. 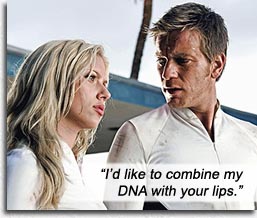 It could have posited so many questions on stem cell research, political ethics, religion and the soul, DNA and genetics, memetic consciousness, hereditary mutation – instead, it’s a Michael Bay film, so massive things get destroyed in Pretty Orange Explosions and special effects stretch from horizon to skyline and hurt my eyes. The rest of the time is spent running from Djimon Hounsou…

Bay’s THE ISLAND did what CLONUS didn’t: execute the idea in stunning visuals. CLONUS did what THE ISLAND avoided: explored the disturbing ethics of the super-rich farming clones in covert colonies for spare parts.

Put them both together, maybe there’d be a watchable movie with thought-provoking themes. Separately, well, CLONUS was skewered by MYSTERY SCIENCE THEATER 3000, and THE ISLAND never made back its production budget. 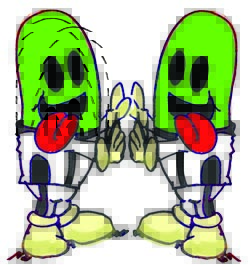 Set in 2019, the white-garbed community where Lincoln 6 Echo (McGregor) and Jordan 2 Delta (Johanssen) live is an enclosed totalitarian facility where everyone has been indoctrinated to the outside world being contaminated and them being the lucky survivors. They are told when to wake, what to eat, how to work, what to watch; they are disciplined for outbursts and constantly monitored for proximity with others. Every day a Lottery is drawn for one person to be transferred to “The Island,” a supposed paradise where they can run free. (In CLONUS, the mythical destination was called – ironically – “America.”) The Lottery is announced on wall screens by a hungry-lipped model (Noa Tishby) who deserves my undying attention to her naked wellbeing.Lincoln asks a lot of disquieting questions about life; his friends seem dissatisfied as well, but cannot verbalize their unease, so Lincoln turns to a maintenance guy in the steam-piped bowels of the facility (Steve Buscemi).

Dr. Merrick (Sean Bean) runs the facility with that ominous British accent which means everything he does is evil. When Lincoln and Jordan discover “going to the Island” means killing you to harvest your body parts, they escape, and Merrick hires bounty hunter Albert to bring them in dead or alive (Djimon Hounsou, oilier and sweatier than any man has a right to be outside of a sauna).

Long after the chase sequences become tiresome, Lincoln and Jordan track down Tom Lincoln, the original “client” whom Lincoln is cloned from (McGregor in a dual role, speaking with a Scottish accent! His clone has an American accent.)

Tom Lincoln commends Lincoln on having sensual Jordan with him, saying the stupidest line of the movie: “You’ve been alive three years and you’ve scored the type of woman I’ve never had in my life.” Keep in mind this guy is one of the super-rich; a boat-buying, car-racing bachelor rich enough to afford a clone. Exactly where is this guy scoring his dates, if not in high society? The ladyboys at the corner of Santa Monica and Western?

THE ISLAND’s gutless Hollywood pap ending finds all the clones “Free at last! Free at last! Thank God Almighty, we are free at last!”… But the “downtrodden human spirit” was never at stake – that trait was only in one character – the rest were just drogues who never questioned authority. You expect us to believe all those inculcated clones find it within themselves to go outside after a lifetime of indoctrination and implanted memories that the outside is contaminated? None protest, are cautious or wary. Michael Bay’s swooping cams try hard for inspiration, but end up goofy.

Now they’ve got to get jobs and pay taxes and their internet is going to go down and their car’s head gasket is going to crack, and they’ll get arrest warrants, and they won’t be able to fix that leg because they’ve got no health insurance and the government won’t recognize them as citizens because their doppelgangers are existent and the legalities will crush courts and drive the legal system to a standstill, and the housing won’t be adequate and the women will be raped and won’t know how to legally retaliate, and the men will be crushed psychologically for being sexually inadequate, and they’ll catch diseases and lose their mortgages… You never knew how lucky you clonies were…

Welcome to the REAL horror. The real world.

From Roger Ebert’s review of THE ISLAND:It was a little eerie, watching “The Island” only a month after reading Kazuo Ishiguro’s new novel Never Let Me Go. Both deal with the same subject: Raising human clones as a source for replacement parts. The creepy thing about the Ishiguro novel is that the characters understand and even accept their roles as “donors,” while only gradually coming to understand their genetic origins. They aren’t locked up but are free to move around; some of them drive cars. Why do they agree to the bargain society has made for them? The answer to that question, I think, suggests Ishiguro’s message: The real world raises many of its citizens as spare parts; they are used as migratory workers, minimum-wage retail slaves, even suicide bombers. “The Island” doesn’t go there, but then did you expect it would?