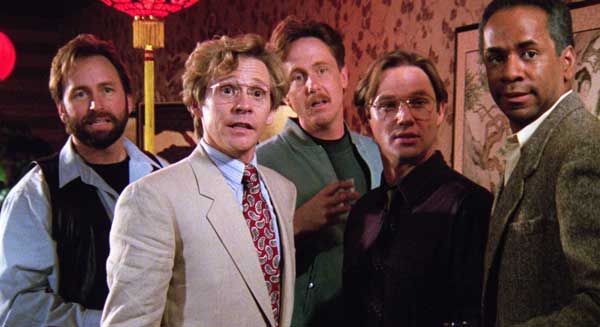 How many B-Actors does it take to screw up a screenplay?

Stephen King’s original novel, It, was one of his many epic masterpieces, and the filmmakers (director/co-writer Tommy Lee Wallace and screenwriter Lawrence D. Cohen) bravely attempt to bring that 1000+ page book to life on the small screen. Originally presented as a mini-series that spanned over three hours in two parts, it suffers the fate of every production made for the small screen – it LOOKS small screen! There just isn’t any substitute for that cool 24-frames-per-second cinematic grit. And it is dating exponentially. Each year, IT will look worse, as filmic technology ramps ever upwards. And the lackluster acting and editing and TV music and excessive fade-to-blacks (to accommodate commercial breaks) just add to the horror. And not in that pants-browning way.

IT follows a group of seven adults who were school friends, brought together again after 30 years, to defeat a recurring evil in their old home town. After a rash of killings that bear the hallmarks of that original evil, the seven uproot their successful careers (save one of them who stayed in town) to fulfill their oath and return to Derry, Maine (Stephen King’s fictional catchall county).

The movie frames the story from the adults’ perspective; as each is called, they flashback to that fateful summer 30 years ago in 1960, remembering their terrifying childhood encounters with the inexplicable It, represented as Pennywise the Dancing Clown (Tim Curry, eating scenery like sushi).

It is these flashback scenes that almost save the movie, as the chemistry between the seven teens is palpable; chemistry which the adult B-actors cannot seem to recreate. And no wonder – just cast your gaze on the wealth of talent: John Ritter (stutterer-pratfaller from THREE’S COMPANY), Harry Anderson (insipid judge on NIGHT COURT), Richard Masur (renowned “That Guy” from innumerable movies), Tim Reid (uh, this guy isn’t even a That Guy), Dennis Christopher (his coolness in BREAKING AWAY was a looong time ago), Annette O’Toole (the poor man’s hard-9, once Lana Lang in SUPERMAN III), and hey! there’s Richard Thomas (forever John-Boy Walton) as Bill, the group’s nominal leader, sporting a ponytail that even Steven Segal would call “kinda gay.”

Masur is the only adult who never makes it back to town, opting to slit his wrists in the tub rather than face It again. It’s TV, so reactions have to be homogenized, thus his wife discovers his body and reacts like she’s seeing a bad floral arrangement rather than the last pulses of blood exiting her husband’s veins.

Their kid counterparts are Jonathan Brandis (for Richard Thomas), his startling eyes reminding us of a young Jeff Fahey, Emily Perkins as Beverly (for Annette O’Toole), Adam Faraizl as Eddie the asthmatic (for Christopher), Marlon Taylor as Mike (for Tim Reid), the token black kid, Ben Heller as Stan (admittedly as vanilla as Masur), Seth Green as Richie (yes, THE Seth Green, Dr. Evil’s son, for Anderson), and Brandon Crane as bullied, fat Ben (for Ritter), who doesn’t really look fat but “built.”

Remember leafing through your dad’s Playboys in 1960?

The kids do such a fine job over their adult counterparts, we often wish the story would simply stay in flashback. (The 2017 remake would actually do this – tell the story in linear time, with the kids’ tale.  And only in that film’s final title will we read: IT: CHAPTER ONE…)

One by one we see the kids’ visions of Pennywise. He first appears to Bill’s young brother Georgie, in an iconic scene, when Georgie loses a paper boat down a drain. Pennywise appears inside the drain, offers Georgie a floating balloon, tempts him with his lost boat, then sprouts jagged teeth and drags Georgie down where “you’ll float too!” It is Georgie’s death that spurs Bill to revenge, and keeps his resolve strong 30 years later to face It and kill It.

One thing about this Warner Bros. production: they really work their rain machines overtime. Georgie follows his boat along the gutter puddles in heavy rain – while the sun slants shadows onto the ground from off-camera somewhere. Georgie’s funeral – in the rain. And later, while everyone is indoors – it starts to rain! We paid for this machine – and by jingo, we’re going to use it!

Beverly (O’Toole) is in an abusive relationship with a caricature of a misogynist businessman, and it is when she flashes back, we realize her father (Frank C. Turner) was abusive too, the movie reinforcing the psychobabble that women always seek mates who reflect their father; her childhood vision is one of blood that no one else can see, bursting from her sink and drenching her bathroom. When King goes cliché with the female coming-of-age metaphors, he soaks in it!

Richie (Seth Green) sees It as a werewolf (after being scared by the film I WAS A TEENAGE WEREWOLF), and his reaction to being grabbed from behind by wolf claws is hilariously inept. Guess young Seth hadn’t finished his acting lessons yet. Or he was given advice by the director, “Imagine you’re seeing, like, a bad floral arrangement!”

Young Mike (who looks like Joe Morton) is the historian, researching the disappearance of people from Derry. He puts two and two together and comes up with Pennywise, the manifestation of an ancient evil that visits the town every 30 years to feast on the fear of children. And their brains, I guess. 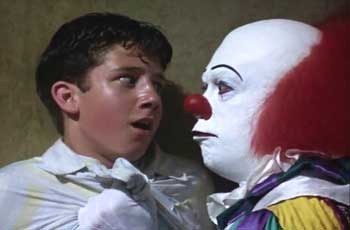 “Honest, sir! Your balloon animals are not as distracting as your receding hairline!”

As much as talented Tim Curry is praised for his “horrifying” performance of Pennywise, Bill Skarsgard’s 2017 personification of Pennywise makes Curry look like an ass clown. And the movie is filled with lame reactions to supernatural phenomena: The kids look through an old photo album and see the photos come to life, showing Pennywise dancing down the street and into closeup in the photo – suddenly his three-dimensional claw shoots out of the photo album, grabbing at them! They scream and slam the book down. Then they, uh, just keep sitting there. And they seem pretty okay with the fact that a demon hand just reached out of a book where the pictures came to life! So, uh, no running screaming into the forest with your heads exploding in terror or anything? Okaaay…

Fat Ben pours his heart out in unrequited love to Beverly, in an anonymous poem. She thinks it’s the sexy kid, Bill. In this 1990 version, Ben looks “tough” with Beverly a head shorter than him, so it is understandable how she might be attracted to him if she found out he liked her. There is a better casting decision made in the 2017 version, where Ben is a short, tubby kid and Beverly is a stunner who must see through his physical appearance to the poet beneath.

Then there’s the school bully, Henry Bowers (Jarred Blancard – not to be confused with Ray Brower, the dead kid in STAND BY ME), who christens the kids The Losers’ Club. The kids’ sequences are set in 1960, so the bullies get to “nigger” the black kid – probably one of the last times it was used in a film not about slavery. And not a Quentin Tarantino movie.

I love the way an officer busts the kids near the sewer entrance (where they’ve tracked Pennywise) and tells them alarmingly, “Another little girl was killed down by the river,” then instead of prohibiting them from being near the river, he advises, “If you come down here, come together like you are now.” What?! I guess murderers used to stick to the code of Don’t Kill Kids In Groups.

Pennywise grabs them in the sewer and boasts, “I am the eater of worlds. And of children.” — Uh, waitaminute… isn’t eating worlds MUCH harder than eating children? So shouldn’t “children” be before “worlds.” You don’t just tack on an easier task as if it’s an exclamation point. And why would a supernatural entity boast about its big mouth anyway? Just eat them if you really need them for sustenance. Why should this demon even consider the children important enough to communicate with, using English, no less?  I’ve found that things you can’t communicate with are MUCH scarier. Take a lion, for example: it won’t stop to boast or give you the respect of talking to you – it will fix you in its gaze, then pounce and maul you before your nervous system can even register you are dead; you will consciously see your own entrails being torn into its mouth, it will devour you that fast. That is more horrifying than any guy in baggy trousers telling me how great he is.

In the present, adult Henry Bowers (Michael Cole) is freed from a nuthouse by Pennywise, to go after the Losers as they close in on Pennywise’s sewer headquarters. Henry was more vital in the novel, while in the context of a movie, he ends up one of those inane characters that doesn’t progress the plot or the throughline; he stabs Mike, then is stabbed himself, and exits stage right.

The adults find themselves in the sewer 30 years later. Bill (Thomas) explains, “It wakes up every 30 years and it feeds. And to feed, it needs to take on a physical form.” They go armed with, uh, Beverly’s slingshot… It is 1990, when automatic weapons can be purchased over the counter in America. But slingshots are fine against a supernatural demon.

Eddie (Christopher) confesses before their last trek, “I could never sleep with anyone I didn’t love and I never totally loved anyone except you guys.” Again, perish all thoughts this would lead to a handie by Beverly. We’re on TV.

I looked up anti-climactic in the dictionary – it said, “See the finale of STEPHEN KING’S IT on TV.” In the bowels of the sewer, the gang encounters a giant stop-motion spider-thingy. (Hooray for that lost Harryhausen art form!) It takes us awhile to realize this – is – the – demon. Excuse the pun, but This Is IT! A slow, hissing/roaring behemoth that rears up on its hind appendages and shines light on the Losers from its thorax, that hypnotizes them – until Beverly slingshots it! Only wings it. But it really discombobulates the spider-thingy. Who knew a slingshot would be better than a machine-gun?

Beverly resolutely grabs her spent rock and mumbles a prayer: “Please God, don’t let me miss again!” Uh, waitaminute – in a universe where It exists, where numerous kids have died due to It, where Stan suicided because of It, is it really any use praying to a god that obviously has some kind of master plan happening with It? Would Beverly have missed a second time if that narcissistic God didn’t hear his holier-than-thou name mentioned? “Oh, I’ll just dump my original plan of having It murder all of Derry, because Miss Sparkle-Britches over there said my name, and God how I love hearing my name!”

But it isn’t the slingshot that deals the death blow – all the Losers together attack this spider-thingy and rip out its heart with their bare hands. Geez, I’m still thinking how much faster this would have been with just one machine gun…

If you think I’m being too hard on the effects of the day, even Tim Curry (tragically confined to a wheelchair after a stroke in 2012) saucily comments on the IT remake, to big laughs from his audience: “I hope they make the end better, because on TV, I turned into a sort of giant spider [laughs] …and it was not very scary [laughs] … or convincing!”

Insipid subplot involving Bill’s wife (Olivia Hussey) being captured by the spider and cocooned along with other victims, like in ALIEN – meaning the person isn’t dead or eaten, just fulfilling the damsel-in-distress trope. Story furiously ramps toward conclusion like a TV movie tying up all its loose ends before a toothpaste commercial.

Then the toothpaste commercial. 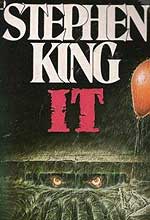