Three innovative guitarists three generations apart are brought together to talk guitar, live guitar and play guitar: Jack White, dynamo revolutionary red meat raw talent; Jimmy Page, who, along with Ritchie Blackmore, carved from caged lightning every riff that rock has ever known, and The Edge, who wears a nice wool cap. 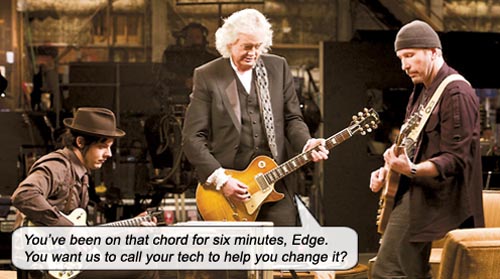 Written and directed by Davis Guggenheim (AN INCONVENIENT TRUTH, 2006) IT MIGHT GET LOUD is thankfully not a mutual knob-gobble, as the awkward segments that show the three guitarists pretending interest in one another’s war stories is interspersed with the histories of each player and their approaches to music, mayhem, and making sweet love to their axe-a-billies.

The introduction to each guitarist speaks volumes – we go from The Edge onstage pounding through one of his teeth-grating clinki-linki-linki rhythms, to Jack White’s old school blues bombast on piano, to the quiet majesty of Jimmy Page coaxing the subtleties of Ramble On from a mighty Les Paul (“light and shade, whisper to the thunder”), from dulcet tones to the rude rock section, which cancels out everything The Edge has ever played in his life.

You are probably getting an idea of where The Edge ranks in this trio. 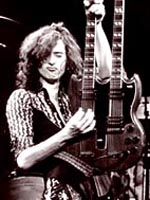 Taken as read that Jimmy Page is GOD… accomplished session musician since his teens, from jingles to film music (GOLDFINGER, DEATH WISH II), from The Kinks to The Yardbirds, to the revered Led Zeppelin; from a raven-haired wizard in tight trousers to a white-maned elder statesman of rock replete with Clive Owen hardguy longcoat…

We see Jimmy as a young posh British schoolkid on his first television broadcast playing skiffle. In answer to the host asking him, “Are you going to play skiffle when you get out of school?” he says, “No, I’m going to do biological research.” And if even half of Led Zeppelin’s backstage mythos and road tales involving nubile young wenches are true, I’d say Jimmy’s life has definitely been devoted wholeheartedly to “doing biological research.” 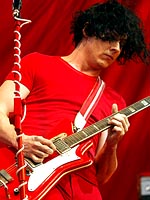 I was no Jack White fan before this documentary, which opened my eyes to the boy’s fearless talent; we see some scorching lead work in The Raconteurs, we see him building a “guitar” from a plank of wood and wire; we hear his creative philosophies (“Pick a fight with the guitar – and win!” “If the organ is three steps away from the mic, put it four steps away – make me work harder to get to it on time,” “When you’re digging deeper into rock and roll, you’re on a freight train headed straight for the blues”); his bravery as an American musician is unassailable, not least for going onstage with The White Stripes with simply himself, a guitar and a drummer wife who can’t quite keep time. Definitely the Linda Eastman of the band, the best things about Meg White’s drumming are her 36Ds. 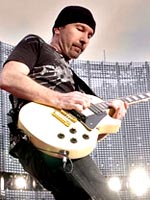 Profiling The Edge actually worked against him – it reveals how poon useless he is as a guitarist. (Even as I reproach him, credit goes to his brave stance in eschewing conventional riff rock in favor of that mind-numbing clinki-linki style which has made him millions – and it’s a powerful visual seeing any person onstage before thousands; it kinda seems like they deserve it, at least for the work they’ve put in to get there and stay there. And I do love the guitar’s raunch in U2’s Discotheque.)

Edge (aka David Howell Evans) does have a few interesting things to say, such as “stripping down chords to their barest essentials” and… and, uh… yeah, that stripping-down-chords thing should distract ’em for another decade while I fiddle around over here with my glorified Quadraverb.

It’s not that I begrudge Edge his effects; everyone uses effects, Page and White included. I myself loved to plug sonic distortion pedals through my already-hardened keyboard to make it zoom like a guitar; and Page shows us one of his favorite songs, Link Wray’s Rumble (featured on PULP FICTION) where Wray can be heard turning up Leslie vibrato to add icing to his sound – but the Edge goes beyond all this and uses effects not as icing, but as the basis of his whole sound, nay, his whole career, and can’t travel anywhere without his technician and effects rack halfway up his Irish arse. Please, just put down the Memory Man and play a song!

He is in this docu because he pushes the boundaries of new sounds from an old instrument. If that’s the case, then I vote we don’t consider him a “guitarist” but an innovator – obviously because the more time he spends knob-fiddling, the less time he can devote to being an artisan. I know that the more time I spend watching movies, the less time I can devote to being a pianist and topless dancer.

The three outline the places and times they grew up in, which ultimately affected their outlook and playing. We see old clips of Zep, Stripes, U2. We see snippets of The Jam, The Buzzcocks, The Ramones, as well as visits with Son House, Lonnie Donegan, Blind Gary Davis, and even Spinal Tap!The Edge: “When I watched SPINAL TAP, I didn’t laugh, I wept, it was so close to the truth.” I remember back in ’84, Gene Simmons had exactly the same reaction. I imagine every major commercial musician who held his job and art close to his heart, and who was ensconced in the culture of the period would have been slapped in the nuts the same way, made to stand on the outside looking in at the strangely satirical state that their art had arrived at.

Page visits Headley Grange, where the mythic Led Zeppelin IV was carved from runes, playing medieval mandolin on The Battle For Evermore and showing the recording room for When The Levee Breaks; White traverses blood-gutters in a ramshackle studio where we see him lay down an original song as it falls from his head; The Edge visits his old school where he plays barre chords and sings to a locker.

A grimacing embarrassment when The Edge is showing Jimmy Page the riff to I Will Follow. It’s as embarrassing as, well, let me think… it’s about as embarrassing as if The Edge were to show Jimmy Page the riff to I Will Follow. After Page has just dropped the swirling otherworldliness of Kashmir on the party, after he has driven through the bluesy brashness of In My Time of Dying – here is this wool-capped novice plucking a repetitive two-chord motif like he’s actually “showing Jimmy Page” something.

I feel like cringing into a corner and burning U2 records. And wool caps.

When Page blasts into the Whole Lotta Love riff, Jack White actually takes his guitar from around his own neck as if to bow down before the god of thunder and pledge his first born, while The Edge stands gape-mouthed in dismay, thinking, ‘How is he doing that without effects pedals?’