Writer-director Nancy Meyers discovers in her late 50s what all men realize in their early 20s – that you can ALWAYS go back to previous panty. And it’s not wrong or right or immoral or unethical. As long as you do it behind everyone’s back. 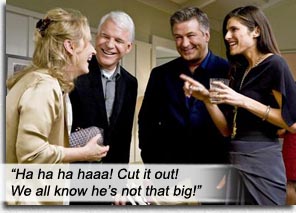 Alec Baldwin shows us how to Always Be Closing in IT’S COMPLICATED, a breezy romp involving an elder couple who still command admiring glances – Meryl Streep as Jane and Baldwin as Jake; they’re a decade-divorced couple who suddenly find themselves thrown together in a lusty one-nighter while attending the graduation of their son.

She is single, yet feels remorse; he is married to a shapely younger woman (tarty Lake Bell) yet feels their hookup is the greatest thing since the Moon landing. And one illicit night becomes two illicit nights, becomes three, becomes Jake turning up uninvited at the most inopportune times; like when Jane is entertaining her architect Adam (a very subdued, even shy Steve Martin), whom she is gravitating towards.

Jane and Jake also have three grown kids, their eldest daughter betrothed to John Krasinski, who pulls off some nice farcical reactions when confronted with furtive evidence of their affair.

Meyers once again populates her tale with people who can afford to have architects on their payroll, owners of picture-perfect houses and flourishing businesses. A little irritating that her characters are never relatable, but then, that’s why we call these moving pictures fantasies – and what can we really expect from the writer-director of THE HOLIDAY and SOMETHING’S GOTTA GIVE?

There are definitely a few chuckles to be had, especially with Baldwin’s audacious forwardness – well, he does have brass balls – but the question becomes, How long can the comedy be sustained without tilting towards absurdity or pathos? Answer: Not very long.

Let’s face it – a situation like Jane’s and Jake’s plays itself out in millions of peoples’ lives daily; it only gets “complicated” when one or both start to take their fling seriously; when Jake’s wifey schedule collides with Jane’s ex-wifey schedule. But a little harmless Ex-With-Benefits doesn’t have to be complicated, as long as you concentrate less on the Ex and more on the Benefits. Trust me. (Unless you’re the husband of an ex of mine…)

Performances are excellent; Baldwin energetic and forthright, Streep tentatively glowing, and Martin sad and kind, and thankfully eschewing the wild and crazy guy that has become so irretrievably tiresome. And there are some wonderful moments that define the chemistry between Jane and her two men: Jane admitting to Jake during one of their trysts that she was partly responsible for their breakup; Jake tucking in his stepson while missing a date with Jane, and the fact that we can read on his face that he is torn between the two; and one of the best accidental kisses committed to film between Jane and Adam.

Meyers doesn’t cop out with cliché to resolve the love triangle. Though their kids – who are unaware of the affair for the greater part of the tale – express a guarded joy at having the family unit together around the dinner table or watching a movie (THE GRADUATE – wink wink!), Meyers opts not to end with the Nuclear Family reunited. In that sense, she is braver than most filmmakers. In another sense, the scenes with Jane’s three shriking female confidantes (one of them the lovely Rita Wilson) drove the film towards the Intolerable Chick-Flick cliff. Saved every time by Streep’s ageless hotness and Alec Baldwin’s invasive nakedness. He’s made his decision for Christ.

It’s not exactly a happy ending, but an optimistic one. For Closers only.