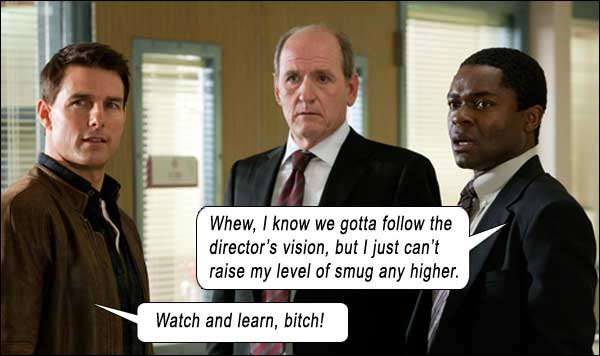 The name is from a series of books by author Jim Grant (pseudonym Lee Child); even so, casting Tom Cruise as a character called JACK REACHER is just asking for the inevitable gay gags, like Jack Reacharound. And what kind of epicness was Grant aiming for anyway? Did he want big chords every time someone said the name, and then putting sunglasses on like David Caruso in CSI?

And his smug. But this is more Tom Cruise’s fault than Jack Reacher’s. I’m sure no author could ever emplace that amount of nerve-jangling smug in any written character. And the worst part is: the Tom Cruise Smug has rubbed off on everyone else in the cast.

Try not to cringe watching Richard Jenkins and David Oyelowo going through Jack Reacharound’s history in that uninterested drawl, like it’s the most offhanded thing in the world: “Well, Jack Reacher’s a ghost, no driver’s license, no residence, no credit cards… Iraq, Afghanistan, The Balkans, – you name it – served with distinction…By all accounts a brilliant investigator…” (Thanks for the character exposition, guys. Do you want the big chords now or should I wait until someone puts on their sunglasses?)

Try not to let the smugness of Reacharound grate on your nerves when he’s investigating the sniper rifle with Oyelowo; the head-waggling walk away from the evidence cage, the rakish tilt in both their heads when they talk to each other like sarcasm was on special at Wal-Mart, the smugness in the questions they ask each other – and never answer; the smugness in Reacharound answering Oyelowo’s question about the rifle serial number a few scenes later. Dragging the smug across scenes!

Then Rosamund Pike appears as the sniper’s lawyer, and all smug breaks loose, as she informs Jenkins and Co. about the law giving her the right to be this smug. She outlines the backstories of all the random shooting victims like she’s doing a first read-through of her sides. (Nice line-read, honey! Take it from the part where you start to give a fuck.) By the way, who cares who these people are? Do you have a nude scene coming up or should I just Google “Rosamund Pike nude”? Goddess-sexy in WRATH OF THE TITANS (2012), here she keeps on way too many clothes for any man to take her blondly – I mean, seriously. Especially not Jack Reacher [dun dun daaah!–sunglasses], who seems to have a history with her, from the way he constantly invades her personal space when giving her orders on what girlie task to do next. Either that, or they should just screw and get it over with. At one point, Reacher exits the bathroom shirtless, and the sexual tension is palpable – between Tom Cruise and his gloriously body-shaved chest.

Mystery is intriguing, although nothing special, and certainly not “gripping” enough knowing that Cruise is the lead, and the production companies will be looking for sequelae ad infinitum, so he’s pretty much guaranteed a Get Out Of Jail Free card if his life is at stake. A purple friend of mine suggested that this mystery thriller would have made a great Batman movie – because that’s what Batman is, a detective. My friend’s (quite credible) suggestion to moviemakers is: disavow all those billion-dollar blockbusters and make 20 affordable, *good* Batman movies for us to enjoy, with very workable scripts along these lines. Although I don’t see how the blockbuster spiral can be quashed with that rollercoaster in motion for over three decades. And with the casting of Ben Affleck as Batman in 2015, not only is it guaranteed to be a billion-dollar baby, but the smug levels will be chokifying.

Suddenly, the great Robert Duvall, as shooting range owner and ex-sharpshooter Cash, whose best character trait is – NO SMUG. We should’ve known that Duvall’s resolute skill would not be affected by Tom Cruise’s – ahem – *reach*… Reacher says something interesting when he doubts Cash’s aim: “It’s a perishable skill.” And Cash, in turn, does something interesting: uses his ears instead of his eyes to aim. You go, Duvall!

You’re kidding me! A 20-minute car chase in 2012? At least with hand-to-hand combat, there is a modicum of creativity employed by the many unique styles and sweet moves that fight choreographers were forced to invent after Steven Seagal ruined everything with his minimalistic smug-kwon-do. But car chases? Jesus! There’s only so much banging of bumpers and slamming of sides that we can endure. Oh, I forgot screeching around corners and the perfunctory car flipping over for no reason other than to annoy me. I will admit, the ending is a surprise. But not worth the other 19 minutes.

Jai Courtney (A GOOD DAY TO DIE HARD, 2013) is the Hot Bad Guy, and victim to one of the all-time ludicrous cinematic tropes:

TROPE: the hero and villain face off – one of them is unarmed. The armed person – whether hero or villain – disarms himself (LETHAL WEAPON, COMMANDO, DARK NIGHT RISES, WRATH OF THE TITANS, BULLET TO THE HEAD, EXPENDABLES 2, the list is endless). Why?

Is it called honor – or padding? 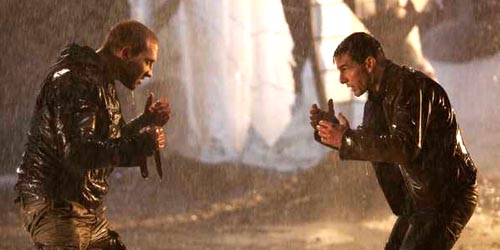 Unarmed guy versus unarmed guy – the tension is totally bearable.

Why don’t these guys take a lesson from the Man Among Men, Clint Eastwood? Any time the bad guy is unarmed, he shoots the bad guy. Gladly. At close range, in the back, while baddie is begging for mercy, whatever. If you were the villain, being shot would be your fate – THAT is the right message, not this imaginary “honor” thing. Because it stands to logic that if you  decided to take the path of villainy, then you HAVE no honor, so in the case of the hero disarming himself to battle the villain on equal terms, that’s just stupid, and in the case of the dishonorable villain disarming himself to give the hero an even shot, that’s just ridiculous!

Anyway, so Hot Bad Guy and Reacher scuffle (and I’m sure there’s a reacharound gag in there somewhere) and bones are broken and it’s raining men and just totally street and post-Seagal. And Rosamund asks Reacher to come back to her place for a snuggle, but he declines on the grounds that Others Somewhere might need his help (like his cape is flying in the wind), and that He’ll Find Her When He Needs Her (i.e. booty call), but mostly, cos he’s —

(1) ON DVD/BLU-RAY
a) When you sense a car chase impending, turn the subtitles on, just in case something important is said during the chase (highly unlikely).
b) Resume the film and watch it on the 1st Fast Forward speed. (There are 3 or 4 FF settings on Blu-Rays/DVDs, and the subtitles still show up on the 1st FF setting.)
c) When car chase is over, turn subtitles off, and Resume film at normal speed.

(2) IN THE CINEMA
a) Leave cinema as car chase begins, visit kiosk, buy an over-priced, under-taste popcorn or shoe-flavored hot dog, and do not re-enter the theater. Finish your food in the lobby, then go back inside.
b) If the car chase is continuing, repeat Clause 2-a.
c) After people-watching in the lobby while you eat your faux-food (inwardly laughing at guys on their first dates being uncomfortable, cringing at a group of women cackling insensately while entering a chick-flick, picking the alpha male from a group of teen boys and girls, perving on hot chicks pretending like they didn’t spend that much time to look this way just to sit in a dark room, etc.), re-enter the cinema. You should now be well past the car chase.