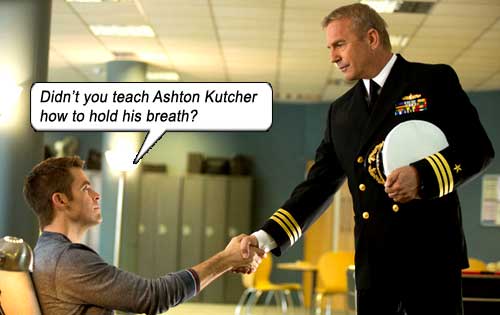 If you’ve eye-rattled through the BOURNE movies (and I know I have), and if you’ve eye-spied the modern MISSION: IMPOSSIBLE movies (and I know I have), then maybe the time you’ve set aside to eye-glaze through JACK RYAN: SHADOW RECRUIT might be better spent polishing your screenplay or your knob, as I’m sure you’ve seen all this running-tilting-tickingclock-technology-spyware-malware-hostage-villain-aikido-shooting clusterfuckulation in some form or other…

Chris Pine (eyes the color of skyblue romance) is CIA analyst Jack Ryan, the latest in a long line of Jack Ryans (a character created by author Tom Clancy in 1984, The Hunt For Red October; this would be the first film featuring this character, that is not based on a Clancy novel). This movie once again screws with the Ryan timeline (as did THE SUM OF ALL FEARS) by making Ryan a young man witnessing the Twin Towers’ destruction on 9-11. So whatever happened to the Harrison Ford Cold War years?…

9-11 spurs Ryan to join the Marines in Afghanistan, whereby he is shot down, meets nurse Keira Knightley, who gives good physical therapy with that man-jaw of hers, is recruited by Kevin Costner for the CIA, and goes to work on Wall Street as a cover for his spywork. (I don’t know what Somberness Gene veteran actors like Eastwood, Willis and Costner possess – as they age, they are able to do less and less onscreen, and yet retain more and more gravitas. I loved Costner’s empathetic performance in MAN OF STEEL; even his beleaguered hitman in the lumpy 3 DAYS TO KILL was enjoyable. Here, Costner walks slowly, speaks softly, does nothing and oozes importance.)

Kenneth Branagh plays a Russian who is trying to profit from Wall Street by collapsing it through illegally moving money around. Apparently that’s “bad” – even though American Wall Street CEO Swine have been doing it for decades and not going to jail for it. But that’s not enough drama for the filmmakers, who try to insert as much intense staring at computer screens as they dare for an action spy thriller (the switching of the flash-drives, the downloading of files; the hacking of secure passwords, the progress screens moving too slowly… my heart was in my throat!). So they insert a redundant physical BOMB into the plot as well. (That oughta knuckle all those Luddites who don’t appreciate the excitement of watching a screen flash “Access Denied”…)

So the plot is to blow up Wall Street – financially and physically. And Jack Ryan is there to stop them– [needle scratch] Hang on! Why are you trying to stop them, dude? If Wall Street is physically blown up, you know who will suffer? Wall Street. No one else. You didn’t fall for that crap about Too Big To Fail again, did you? Oh, sorry, it’s not 2008 yet… If Wall Street falls it won’t make any difference to our lives; then again, it might make a little difference – our lives would be BETTER because those slothful gluttonous avaricious pricks on Wall Street won’t be in the picture any more. Rejoice, oh frabjous day!

But wait – there’re only computers and files and papers at Wall Street’s physical location. Surely there are virtual copies of ALL Wall Street’s money crimes somewhere else, allowing them to continue perpetuating/perpetrating them should the physical buildings actually fall down. That’s only common sense. Maybe Fort Knox has to have physical gold at its location, but Wall Street would have gone virtual as soon as the greedy swine figured a way to keep their money hidden in the Bahamas. I understand that the CIA is concerned for the people in the buildings, which is why they are trying to stop the bomb – but I’m not buying that concern for a millisecond. Not with the term “collateral damage” a reality – a term that THEY created to describe innocent bystanders.

Branagh also directs (with a peachy Russian accent), from a script by David Koepp.  Production values are excellent, action is standard, ticking clocks are ubiquitous.

Annoying Keira Knightley is Ryan’s wife – you know the stereotype: she is clueless he’s in the CIA, he lies to her during a phone call that he’s at his desk job while fighting an international assassin in a European bathroom; wackiness ensues when snoopy wife follows him to foreign country, finds his gun in desk, thinks he’s having affair. What fun we’re having rolling out the same old conventions! She gets in on the spy game as Jack’s backup because she whines loud enough. That’s believable.

Some running and jumping and driving stunts later, everyone Russian is dead, everyone American is alive, and everyone watching this movie is asleep.