See what idiots with movie contracts are capable of – not much.

Okay, at this stage, someone really needs to stop me beating the shit out of Johnny Knoxville for this lame excuse of a polished turd he calls a “movie.” Trouble is, he’d enjoy it. 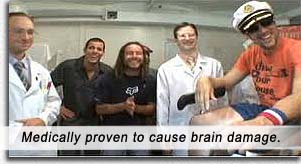 Knoxville (the “brains” behind JACKASS) and director Jeff Tremaine (JACKASS: THE MOVIE, JACKASS NUMBER TWO – what a powerful resumé to take to your grave!) pinch off the outtakes from JACKASS NUMBER TWO, add a few boring interviews (like we really need to know how scared Preston was, dressed as a gorilla on top of a porta-potty) and slap together a 64-minute insult to humanity and call it JACKASS 2.5.

I’d remark, “Well, we see why they’re outtakes,” but seriously, I can’t tell the difference. What professorial authority discerned that these particular infantile skits were not mean-spirited, imbecilic and pointless enough to be included in the theatrical vision of NUMBER TWO? What constitutes “watchable” shit from just plain shit?

During one of the gags perpetrated by Knoxville and his sadomashochists and roadkill-to-be compatriots, comedian Jeff Ross tags along. Not that Ross himself is one of the foremost comedians of our time, but at least he tells it like it is to Knoxville’s face; he couches his critique in humor, of course, but its bite is not lost upon Knoxville, who fake-laughs through it all.

Ross: “You guys shoot a movie like a pickup basketball game!”
Knoxville: “In the end we got the shots. We can cut it together.”
Ross: “Yeah, maybe cut it together for some DVD extras!”
At that point, Knoxville breaks up in laughter so fake that we know Ross’s stinger has actually hurt him far more than any bull goring his thigh. And even the cast know it, as one of them adds, “Ouch!”

The previous JACKASS movies actually contained some guilty pleasures, but this moronic assfest is very short on laughs. Some of the lowbrow gags include drinking beer sploshing from the fingernails of an Indian man with six-foot-long nasty growths only nominally considered fingernails; anal-bead kite-flying, lying on a bed of nails with cobras on chest and balls. And here’s a real nugget of intelligence: shooting firework rockets in Bam Margera’s parent’s home, and Bam’s mom chastising them like the imbecilic juveniles they are for burning the carpet. Movie-making just doesn’t get more compelling!