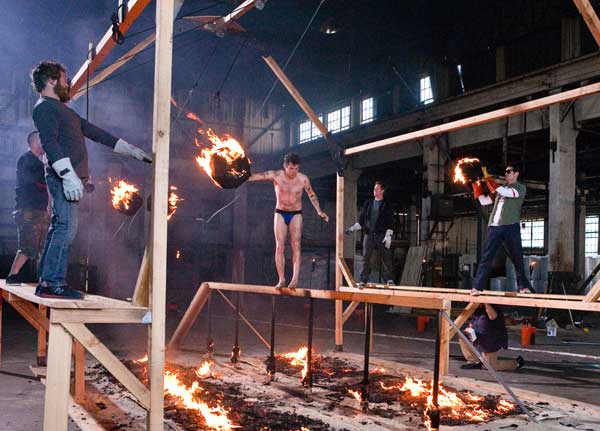 During the “Flaming Gauntlet” stunt in JACKASS 3.5, I realized that none of the stunts that Johnny Knoxville’s neurologically disordered brood perform are meant to succeed. The stunts have no training behind them, no practice, no Plan B; the brood enter into these stunts with their brains on standby and their balls braced for impact. In this gaggle of outtakes from JACKASS 3D, we don’t realize we want to see them fail, until the odd moments a stunt goes reasonably right. At that moment, we feel let down; there is disappointment, not just from the JACKASS crew, but within our own chests. So in Flaming Gauntlet, when brain-rotting Steve-O attempts to walk a pole between two sizzling, fiery hotplates, with flaming balls being swung at him to throw him off balance, we know he is going to fry.

Because that’s what sells this lurid amble into the lizard brain of humanity.

If you know the JACKASS ethos, you’ll know the JACKASS 3.5 “movie” is simply stunts, pranks and nut-shots, with no plot, no production values, and no redeeming qualities. It is a direct-to-DVD release, starring Johnny Knoxville, Steve-O, Bam Margera, Preston Lacy, Chris Pontius, Dave England, Jason “Wee Man” Acuna, and other turds, containing interviews, outtakes and failed stunts that did not make the cut in the marginally better JACKASS 3D. (Although I have no idea what I am even using as a criteria to measure “better.”)

During the opening interviews, the main message is that being on the set of JACKASS is “nerve-wracking” as pranks come at you from any direction, from anyone, at any time, sometimes even when you are sleeping, and always most definitely aimed at your nutsack. Painful pranks like Margera using a defibrillator on a sleeping Ehren. At one point, Ehren tries to get back at Margera, and it devolves into a real fight that has to be broken up. They are all smiles as they are pulled apart, but we can see the exact moment it got RAYL. We got eyes. 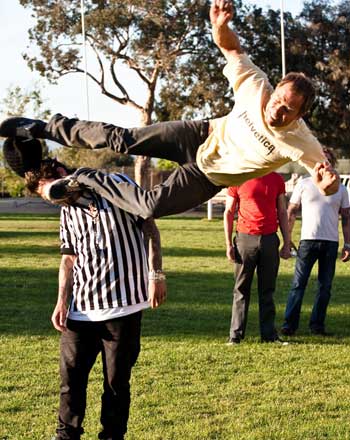 A guy kicking another guy in the face: entertainment for people who like falling off horses.

We see footage using a “Phantom Camera” – a camera with a superfast frame rate that produces footage in super slow motion. Do we really need a closeup of Wee Man’s hairy naked ballsac from behind, being hit by a tennis ball?

All of them must be infertile by now, right? At the least, impotent. We know Knoxville has a major penis malfunction. And Ryan Dunn is dead, this film being the last footage of him.

There is something limbic in the frenzied hurling of shaken Coke bottles to the floor, making them explode in different directions, spurting, hitting the walls and camera and, of course, their nutsacks. Do we watch this brainless dreckage because the JACKASS team live out our catharsis? Decompression? Revenge on repression?

It had to happen – electrodes to the testicles. Steve-O.

There is a certain level of skill/interest in the final scenes of rebounding basketballs from incredible angles and distances onto someone’s nuts.

Enjoyment for people with the IQ of a turd.