One-dimensional characters in a 3D world.

Diary of a Douchebag.

Johnny Knoxville leads his troupe of professional sado-masochists through another array of idiotic stunts in JACKASS 3D, that I’m guessing is for the purpose of:
a) getting themselves killed;
b) satisfying their torture-porn kink;
c) touching each others’ balls.

“Professional” because these guys are somehow getting paid to perform these stupid, elaborate stunts, and “sado-masochists” because the stunts are specifically concocted to cause pain and suffering to the performer.

The troupe includes the usual jackasses: baby-faced Bam Margera (who suddenly gets real when confronted with his snake phobia), Ryan Dunn (now dead), Steve-O (depleted brain activity), Jason “Wee Man” Acuna (little people can be this stupid too), obese Preston Lacy (also credited as “writer” of this garbage), Chris Pontius (apparently a nudist), unnoticed Ehren McGhehey and leftover-nutbag Dave England. Make no mistake: these guys are idiots in the true medical sense of the word, meaning “A person of severe mental deficit, incapable of coherent speech or of normal response to danger.”

Directed by JACKASS veteran Jeff Tremaine without any plot, purpose or point, this excuse for a “movie” opens with Beavis and Butthead (yes, the cartoon characters) explaining the use of 3D glasses, because:
a) there was real doubt that this movie’s demographic would know how to use them, and
b) the movie needed more proof on how lowbrow it was.

Is the 3D effective, cool, worthwhile in a movie of this ilk? I dunno. Who cares?

Opening titles feature the cast being belted and beaten to near-death in super-slomo. And that sounds like Dee Snider singing the opening theme, so they had to raise at least $4.50 for his fee.

The number of times these guys bash each other in the nuts, it’s like a closet-homo carnival of repression. These guys are so into touching, looking at, hitting, swiping, fondling, and gargling each others’ manginas, they’ll use ANY EXCUSE to get naked or down to their freeballing underpants. Or how about when Knoxvile throws a golf ball at naked Pontius, who bats at it with his tumescent dick, whereupon Margera tries to catch the golf ball in his mouth. Guys, there’s an easier way to get your mouth near each others’ dicks: just suck each other off. 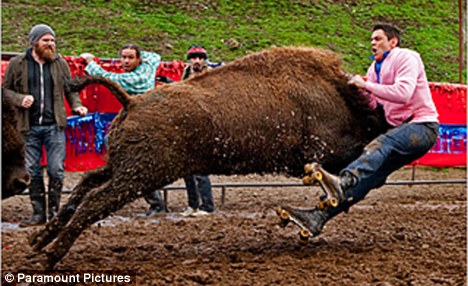 Why do I need balls if all I do is hang around other men trying to touch them?

Most of the stunts are mean-spirited and somewhat disturbing for their pain or imminent-death quotient. What are the conditions of the insurance companies for this film? When the idiots are guffawing and running toward a fallen comrade after a stunt, is there a seed of fear in their heads that he might not be alive, or chronically damaged for life? Who cares?

Live Long and Fester, you tools.

Dick no more.
It was during a motorcycle stunt in 2007, in honor of Evel Knievel, that Johnny Knoxville irreparably injured his penis and tore his urethra. In his words, “It’s like a sock that has lost its elasticity.” Horrible, saddening, disturbing. Though this is probably the worst thing any man could endure, and though every man feels extreme empathy for the fact he has had to catheter himself for over 3 years just to take a piss (to alleviate his insides scarring), we must also ask, Did we expect anything less? Almost every stunt this guy does threatens to de-male him.

So we wonder, Is it manliness or stupidity that keeps him coming back to the stunts that could worsen his plight?

He has actually sired two healthy kids since his accident, and is reportedly happily married, and his BAD GRANDPA films have toned down the injurious stuntwork for him, so maybe there’s a glimmer of hope for the dick yet (meaning Johnny and his johnson).