Johnny Knoxville and his crew of masochists do more stupid stuff which hurts them badly and could get them killed – and film it. Number Two in name, number two in nature. But of course, they meant it that way. And that’s what scares me… 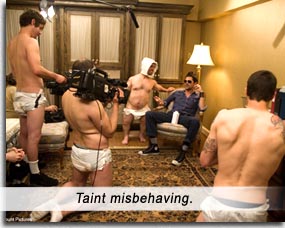 JACKASS NUMBER TWO is so funny and so unnecessary that I’m laughing on the outside and crying on the inside.

Bam Margera, Steve-O, Chris Pontius, Ryan Dunn and Jason “Wee Man” Acuna are the nucleus of this team of men who show affection by kicking each other in the nuts and laughing, setting new lows for redneck entertainment with every spaz stunt they never pull off. Either they’re a bunch of guys who refuse to grow up – or they’re trying to get themselves killed, which is the same thing from another direction.

There are the usual rocket sleds off piers, the willful crashing into objects, the beatings and molestations by each other; there is Knoxville dressing as an old lady whose flaccid breasts “unwittingly” dangle out to discomfort passersby; there is man-nakedness at every turn, branded butt-cheeks, blurred balls and stinking taints; there are the practical jokes that the gang play on each other, like throwing a King Cobra into a pen with the snake-phobic Margera, or doing the switcheroo on Margera’s mom so that she wakes to a fat impostor in her bed who isn’t her fat husband.

Then there are the clinically insane bits, like Steve-O pushing a giant fish hook through his cheek, attaching it to the end of Pontius’s fishing line and jumping into a sea full of sharks; swimming with sharks isn’t dangerous enough, he has to risk his cheek being ripped off from Pontius trying to reel him in if a shark grabs his leg, not to mention the infection and scar and simple visceral pain the hook is going to cause on his face.

And why does Margera agree to have his ass branded with a red-hot cattle-brand? And how many times must they get chased and butted by bulls before they realize they might actually get a horn through the liver and die? Steve-O puts a leech on his eye. Pontius eats cow shit. And someone drinks horse semen. Am I being unreasonable or am I getting too old to appreciate the idiocy?

Why does the “movie” open with Ennio Morricone music from FISTFUL OF DOLLARS? And then a snake bites Pontius’s penis dressed as a mouse.

The best “bit” is a gag within a gag and the most complex setup; I doubt this movie’s demographic can even follow it: they dress McGhehey as an Arab, strap him with fake dynamite and beard, and put him in a cab to Burbank Airport. The joke will be the cabbie’s reaction to this obvious “terrorist” passenger… The REAL joke is on McGhehey who is being set up by the crew: the cabbie is Jay Chandrasekhar (of Broken Lizard) in disguise, who has been told to slap Arab McGhehey around and pull a gun on him. Plus, unbeknownst to McGhehey, his fake beard is pubic hair shavings from all the gang, one of them with crabs.

There is a minefield of richer commentary here, but even the time taken to view this sordid public display of egomaniacal deviancy wastes time that could be spent doing something more productive with my life – like electrocuting my balls. Hey, maybe these JACKASS clowns are onto something…

“All My Friends Are Dead.”
This Turbonegro song features on the soundtrack. I guess it’s inevitable. The most amazing part of JACKASS alumnus Ryan Dunn’s June 2011 death was that it wasn’t from something he did on JACKASS.

“Police say the 34-year-old was travelling at around 130mph in a 55mph zone when his Porsche 911 flew off the road at around 2.30am on Monday morning in Pennsylvania, instantly killing him and his passenger.”