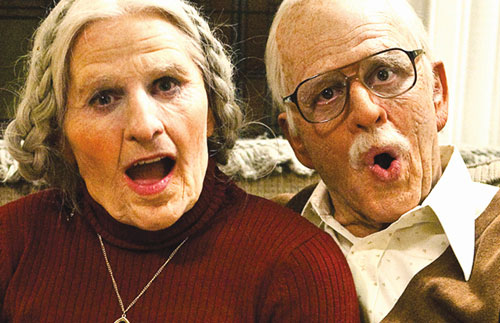 The joys of backdooring!

Peeking in Grandpa’s Back Door.

A “Making Of” reel for BAD GRANDPA, BAD GRANDPA .5 is quite an interesting companion piece, filled with outtakes, interviews, behind the scenes footage and deleted scenes of Irving Zisman (Johnny Knoxville in oldguy makeup) creating socially-impure havoc.

In a package more professionally presented than any of the previous JACKASS straight-to-video “extras” movies, BAD GRANDPA .5 is filled with sketches that are not in the original movie, and some that seem wholly excised from it, notably Catherine Keener’s large part as Irving’s wife Ellie (in heavy “Bad Grandma” makeup). There is also a large amount of new footage featuring writer Spike Jonze (in even badder grandma makeup) as the lactating octogenarian Gloria.

Johnny Knoxville and his twisted compatriots first take us through Irving Zisman’s oldguy makeup process, developed over the years from the MTV JACKASS days to the feature film. And here’s a nugget about the makeup that shocked me like a cattle-prod to the scrotum: BAD GRANDPA was nominated for Best Makeup at the 2014 Oscars! Knoxville tells of his exasperation with the arduous makeup process on the very first day and not looking forward to enduring 59 more days of it – until their first day of shooting where they riled up a course-ful of golfers and he realized it was all worth it.

Director Jeff Tremaine describes their initial idea for BAD GRANDPA: hiring “babysitters” to talk to Irving, where the producer would appeal to people’s pity, “My grandpa is sad, sitting there all alone; I’ll pay you to go talk to him but don’t tell him I did that…”  It created a different dynamic that didn’t work as well as people being blindsided.

We are shown a few scenes of the crew stopping gags when they get too intense for the marks. I’m presuming that if you rolled cameras long enough, that would be the final outcome of most of the gags – the crew stopping just before bloodshed or cops (nowadays in most States, you won’t get one without the other).

We see camera-hides and mic-hides – ingenious concealments – and the inside of the control van, which looks like an FBI sting in process with its banks of monitors and electronica.

We see gags on dating experts, tantric sex experts, erection gags in a casino, corpse burial gags, and we get lots more of the penguin guy from BAD GRANDPA, with his accent straight out of THE SOPRANOS. We hardly see young Jackson Nicoll, the foul-mouthed little wonderboy who played Billy.

I’d better go before I actually start liking this shit.