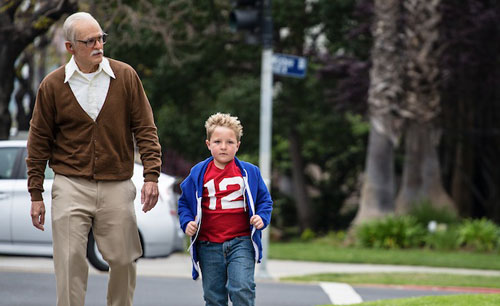 The JACKASS team bring one of their rabble-rousing characters from the TV show to the big screen: Grandpa Irving Zisman aka Johnny Knoxville in oldguy makeup. Tearing up civil society in hidden-camera anti-social fervor.

As Jackass-based media goes, it’s the most cogent of the lot; as hidden camera media, Sacha Baron Cohen does it better.

The plot of the cantankerous Grandpa growing to love his grandson over the course of a road trip is a thin disguise over Johnny Knoxville finding ways to make himself and unsuspecting people look like assfaces.

Grandpa Irving’s wife just died, at the same time his deadbeat daughter (Georgina Cates) burdens him with his grandson Billy (9 year-old firecracker Jackson Nicoll), as she is going to prison “for drugs.” Widower Irving, feeling unburdened for the first time in 46 years, doesn’t want “the little cockblocker,” so decides to drive Billy cross country to his deadbeat father (Greg Harris, who only agrees to take Billy for the child support benefits). This actual storyline (written by Knoxville, Spike Jonze and director Jeff Tremaine) is woven through the hidden-cam gags, and there is even an emotional arc, of Irving coming to the realization that he loves Billy and doesn’t want to give him up.

The hidden cam gags are the usual motif of Knoxville (in full Grandpa makeup) wading into perfectly normal life situations and turning them helter skelter, so that people around him are forced to act, react, fight or flight: getting his dick caught in a vending machine and asking passersby to help get it unstuck; running over a giant penguin model and fielding the threats of the goombah who insists he fix it; knocking over an open casket at a eulogy; causing trouble at a bingo game; pulling out his lengthy ballsac at a girls’ night strip club; accidentally destroying the cake at a wedding…

His young unseasoned accomplice is right there beside him all the way. Young Jackson Nicoll is as corrupt as Knoxville and crew, and by that I mean, the guy has a natural ability to stir the shit shamelessly. Yes, he’s sometimes being fed lines through an earpiece, but he’s just as quick on the uptake when he’s out there on his own. He bothers passing men to be his father, asks a sex shop worker what her stripper name is – to her chagrin – then dubbing her “Cinnamon”; participates in a Little Miss Pageant, disguised as a little girl, then does a striptease to Warrant’s Cherry Pie… He is right amongst the action on almost all the gags, holding his own beside Knoxville’s seasoned shameless shit-stirrer.

The finale is mildly disturbing for all the wrong reasons:

Irving delivers Billy to his trailer-trash dad at a pub being attended by a bike club called the Guardians of Children. Holy shit! Was this a planned plot point? Greg Harris as dad bravely plays asshole, almost getting himself killed by this bike gang. But here’s the most disturbing part: Knoxville, in one take, pulls an emotional goodbye scene to Billy. Remember, the Jackass crew did not have the luxury of doing more than one take for the bikers’ real reactions. As Knoxville chokes back tears outside, a biker says to him, “I can see the emotion.” Think about it: Knoxville isn’t playing to other actors in a scene with him – he’s fooling real people into believing he is crying inconsolably for his grandson! Johnny Knoxville not just a wannabe stuntman and self-flagellating dickhole? In reality, an Actor’s Actor? Now that’s disturbing!…

And check out the big balls on Greg Harris playing the insensitive prick father. Most bikers are hair-triggered to beat up anything that moves that doesn’t agree with them, and Harris bends over backwards to mistreat his little boy in front of these particular bikers who are laser-focused on mistreatment of children. Now that’s dedication to getting the shot! And the little kid once again proves his mettle by being right amongst the fracas and coming away – we hope – untraumatized.

The strangest element in GRANDPA is Irving and Billy alone in the car. While we imagine they would be using these breathers to laff uproariously about the unsuspecting marks they just punked, they remain in character, playing to the throughline. Funnily enough, these moments take us out of the movie, not the outlandish stunts they are pulling amongst the populace.

BAD GRANDPA follows the trend of exposing Middle America for the braindead river of flotsam it is, that trend reaching an apex with Sacha Baron Cohen’s BORAT and BRUNO. (It’s intriguing how most of the marks in hidden camera media are so caught up in ME ME ME ON TV, MA! that they rush to sign that release form no matter how stupid or foolish or ignorant they look.) Unfiltered reactions are priceless no matter who elicits them, but it just seems like Cohen does it more convincingly, more “professionally” (whatever that means – maybe a more “believable” hidden camera ethos?) and more hilariously.

This is not to say BAD GRANDPA is trash. It’s a more polished production than any of the JACKASS “films,” and it rates above average because, despite your functioning brain, you can’t help but laugh. A primitive survival instinct? A displacement gesture? The I’m-glad-it-wasn’t-me gene? We have to admit that there’s something viscerally enjoyable about seeing real people dealing with unreal situations in real life.

As a final thought, I love the fact that Jonze, Knoxville and Tremaine got away with naming their company Dickhouse Productions.