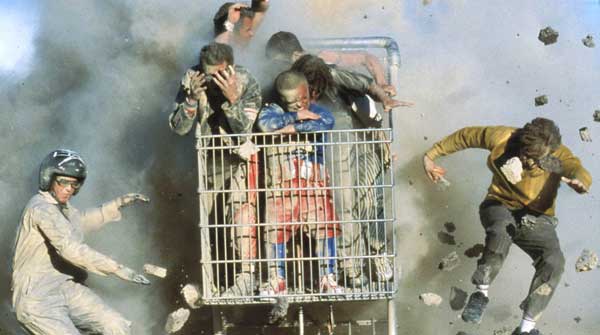 Somebody should probably tell these guys that– ahhh, forget it!

Poffy being a jackass

If human civilization is to retain any semblance of forward momentum, never let our children see JACKASS: THE MOVIE. Matter of fact, once you’ve seen it yourself, burn your copy and wash your genitals.

With a bravado that most of us relinquish at age twelve, Johnny Knoxville and his near-equals in brain-deficiency offer innumerable hideously-filmed vignettes of them being – well, jackasses: snorting wasabi and vomiting it, electrifying their perinea, harrying Chinatown dressed as “Night Pandas,” golf-cart demolition derbying…

From hurling themselves into spinning ceiling fans, to taking a dump in a hardware store display toilet, to presenting their meat-packed jockstraps for alligators to attack, with the number of laws that these guys transgress through their fatalistic stunts, it is truly a wonder that none of them are crippled, dead or doing life as some perp’s byotch.

Haphazardly “written” by Knoxville, Spike Jonze and Jeff Tremaine, and uncouthly “directed” by Tremaine, though this “movie” has no socially-redeeming value, its makers obviously know something about our bloodthirsty proclivities that we who pretend to be civilized do not. Amidst all the assault, battery, indecent exposure, negligent driving, willful destruction of property and matchbox car butt-plugging, hidden in plain view amongst the skull-duggery and dumb-fuckery, there is most definitely a message – but I’m too busy laughing to figure out what it is.