JARHEAD is the new JACKET. 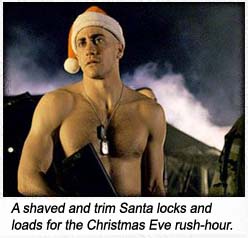 Kubrick’s FULL METAL JACKET (1987) followed U.S. Marines from boot camp to Viet Nam. Director Sam Mendes keeps the formula and updates the war in JARHEAD (to the Gulf War of the early 90s), and – though I might warrant a smack in the cucumber for suggesting this – succeeds in making a more compelling anti-war movie than Stanley Kubrick. Maybe because Viet Nam is growing distant in our minds and current skirmishes represent an even greater stupidity on the part of the American military, who don’t seem to have learned a single thing from their mistakes in that previous conflict.

Like JACKET, this film is done in hindsight (of Desert Storm (The TV War) and the Iraq offensive (Dumb President Dumb War)), which pervades the attitudes of the grunts who sometimes query their purpose… the sociological logistics are too varied to discuss here – especially with Jake Gyllenhaal’s naked patootie jiggling all over creation.

Gyllenhaal gives a mad dog performance as LCPL Anthony Swofford, who finds – like Vincent D’Onofrio in JACKET – a killer joy in being a sharpshooter, yearning for the “pink mist” of an enemy’s exploding head in his sniper’s gunsight. But JARHEAD gives him no satisfaction as he and his fellow grunts are roiled through boot (with Jamie Foxx doing a pale Gunnery Sergeant imitation of JACKET’s granite-dicked Drill Sergeant, R. Lee Ermey) then dumped unceremoniously in the stark desert devoid of a concrete enemy, where their mojo takes a giant hit once they face the reality of smart bombs and supersonic jets doing the killing for them.

CPL Troy (Peter Sarsgaard, stone-faced as always), laments, “This war’s gonna move too fast for us. We can shoot a thousand yards. To go that far in Vietnam it took a week; in WWI, a year; here, it’s gonna take about ten fucking seconds. By the time we have our rifles dialed, the war is gonna be a mile down the road!”

Like JACKET, this movie is not about bullets and bombs tearing flesh off bone, but rather the loneliness, confusion and misguided patriotism of the United States Marine. 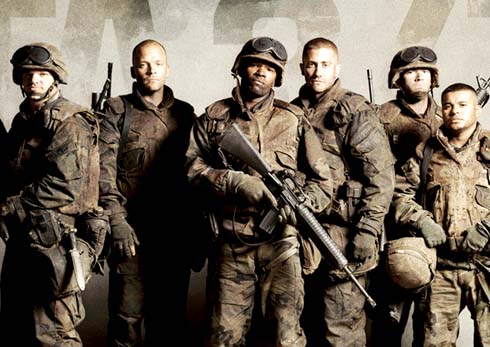 Directed by Sam Mendes, from Anthony Swofford’s book, JARHEAD finds Swofford and his fellow Marines aching for hard combat and always ending up on its periphery. Every promising incident is a let-down: meeting Arabs in the striking white heat of the flat, lifeless desert, they tense up for battle, only to find the Arabs harmless; watching in heady anticipation for U.S. fighter jets to “drop the hand of God” on an enemy outpost, only to have their jets mistake them for Iraqis and drop that hand on them; when Swofford and Troy are at last given a sniping mission by Col. Kazinski (Chris Cooper), he stresses “This is not Rambo time – you must get clearance before taking a shot” and then to flense every ounce of glamour from their tour of duty, they are denied even that one small joy, as the grating Major Lincoln (Dennis Haysbert) rescinds their order with an air-strike instead.

JARHEAD (the term describing the high and tight Nazi hairdo of the troops – hey, I’m just a casual observer, not advocating National Socialism under a Chancellor – but those haircuts would look mighty familiar to an Auschwitz survivor) is alternately a glorification and debunking of war; even as Swofford left his loved ones behind, his Marine brotherhood will live in his blood till death; he mentions Bush (G.H.W.) in conjunction with the price of oil, but he knows nothing of the politics behind being in this country he doesn’t understand, readying himself to fight for platitudes he doesn’t find convincing, but Troy puts it in perspective: “Fuck politics. We’re here. All the rest is bullshit!”

From homo-erotic brawling, football games and scorpion fights – using every opportunity to show off their gym-baked bodies in the 112-degree heat – to the humiliation of the Wall of Shame (a bulletin board plastered with pictures of deserter girlfriends and wives, labeled, “I loved her so much – now she’s with my brother,” “took my kid and disappeared,” etc.), the Troop’s bloodlust is constantly tempered by their disillusionment.

When Swofford’s girl describes “a good listener” in one of her letters, he knows he has lost her – and finds solace in discovering that others suffer the same infidelities when a fellow Marine’s wife films herself in coitus canidae with a neighbor, the whole troop laughing at the video while the Marine himself has a meltdown.

We can honestly call the look of this film “beautiful” – from its leached-to-the-point-of-frying in the spanking desert sunlight, to the bloodied glow of oil fields alight in the night; great care was taken to make each scene resonate with an ethereal detachment. We might have watched this war on tv, but these troops were just as detached while being right amongst it.

Before their deployment, they watch APOCALYPSE NOW, cheering in orgiastic fervor at Francis Ford Coppolla’s Hueys storming a Vietnamese village (with Martin Sheen and Lawrence Fishburne onboard as the Teen Brigade!) to the strains of Wagner’s Flight of the Valkyries, resembling more than ever the dipshit cum-swallowing maggots their drill instructors accuse them of being. Seeing this sexually orgasmic fanaticism is disturbing in any forum – from rock bands to Mormons to politicians – but when the fanatics have M-16s, I don’t think it’s unpatriotic to examine just what type of unbalanced children are calling themselves the “defenders of our freedom.”

Sgt. Sykes (Foxx) tells his men exactly what they can and cannot say to the press. How does the Marine Corp reconcile that with democracy? When Kruger (Lucas Black) complains of censorship against free speech, adding that that is exactly the type of censorship they are fighting here in Iraq, Sykes retorts, “You signed a contract – you don’t have any rights! You are Marines – there is no such thing as speech that is free.” From where I’m standing, the only people who would sign away their rights – after being clearly told they are doing so (by the Marine Corp and by this film) – are followers or masochists. Marines fight for free speech though they are denied it by the government ordering them to fight for it. Media spin would call that “noble.” I call it doubly deluded.

Because the “free speech” fight is the façade; the conflicts revolve around America’s stranglehold on foreign energy resources; they are about sanctions and embargos and supporting allies for the sake of oil reserves; funding communism only to be able to unite the American people into supporting the fight against it… Let’s face it citizens, we’re being protected by adrenalized apes who learn their craft by being forced to repeat to themselves, “This is my rifle. There are many like it. This one is mine.”

(How’s that “a-b-c” mnemonic workin’ out for you guys? Got past “el-em-enno-pee” without tripping and falling down the stairs yet?)

But what do Marines do with their latent killing drive once it is awakened by their training? In JARHEAD they can do nothing. Whereas in JACKET, Joker had to confront his killer instinct after remaining detached for the body of the film, in JARHEAD, Swofford and his crew must repress that instinct, while they “patrol the empty desert, throw hand grenades into nowhere, navigate imaginary minefields, fire at nothing, and hydrate some more.” And as G.H.W. Bush gluts the desert with unnecessary troop surges (like father, like son) for Operation Desert Shield (which would elevate to Desert Storm), their primal animalism is explosively channeled into crazed outbursts, incessant masturbation over unfaithful girlfriends and drunken parties (with naked patootie-jiggling).

JACKET’s slogan was: “In Vietnam The Wind Doesn’t Blow It Sucks. In JARHEAD, honed to: “Welcome to the Suck.”

JARHEAD shows a growing tally of troop increments, until 575,000 are deployed, Swofford’s troop spending 1,765 hours in the desert (about 73 days) – until it all unceremoniously and unexpectedly comes to an end. Swofford says blankly, “I never shot my rifle.”

Back home, the troops resume their workaday existences, listless, lifeless, with Swofford knocking on his girlfriend’s door to a guy answering. (Nothing we haven’t seen in BIG WEDNESDAY; nothing we don’t know about the fidelity of women.) He ends up in an apartment decorated in Reagan-era San Fernando Valley Redneck, staring out the window…

Only time will tell if the sacrifices and wasted lives of today’s troops will teach the American military and its commanders in chiefs the lessons they refuse to learn.

Maybe I can see the indicting elements of JARHEAD because I am strong-minded enough not to be militarized. But maybe military wardogs will see only the glory because that’s what their vicious indoctrination inclines them to see. If that be the case, then there can NEVER be a war movie made – from the jingoistic SANDS OF IWO JIMA to the empathetic LETTERS FROM IWO JIMA – that can effectively convey its true message to all of the people all of the time.