Terrorized by puppets and stock footage. 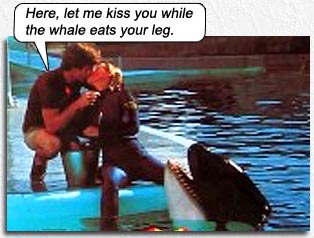 The JAWS franchise reminds me of the PLANET OF THE APES franchise: a stellar opening film that should have remained un-sequeled, but upon box office denoting inevitable sequels, each successive sequel granted less and less funding and talent until the franchise, concept and the films themselves became lurid blobs of crap.

JAWS 3 is one such lurid blob of crap. A shit sandwich, if you will.

The story is passable: a Sea World fun park is infiltrated by a great white shark, the owners capturing it and then discovering its gigantic plastic, roaring mother is somewhere in the enclosure and about to go ape on them.

Dennis Quaid and Bess Armstrong give new meaning to vapid; he’s the park designer and eldest son of Police Chief Brody from Amity Island (oh, Roy Scheider, where art thou?) and she’s his girl and head curator. Luscious Lea Thompson (before her primo role in BACK TO THE FUTURE) is paired with beige John Putch, playing Brody’s youngest son with the stylings of a showroom dummy; Lou Gossett Jr. is the overacting park CEO and Simon McCorkindale pretends to be a scientist or something.

Keep in mind that JAWS 3 was specifically made as a 3D presentation, and was not funded enough to re-edit a 2D version, so there are still innumerable inane shots that pander to things-coming-at-you-from-the-screen: an arm, an eel, coral, a speargun. More annoying than wearing those 3D glasses. On a side note, 3D televisions are coming into domestic use even as we laugh at JAWS 3 – so in retaining all its ludicrous 3D footage, will this film one day be in high vogue? Those filmmakers – real cinema sharks.

Most unbelievable 3D shot is the climactic scene where mother shark breaks through the control room glass (‘unbelievable’ as in we cannot believe that any filmmaker would allow this shot in a movie unless they planned career suicide).

Director Joe Alves was the production designer on the incomparable JAWS and lesser JAWS 2 (which now looks like CITIZEN KANE next to JAWS 3). How does that saying go: ‘Don’t quit your day job’? Which makes it a wonder that JAWS 3 boasts such an amateurish production design; but it does explain why the movie is an editing laughingstock, as Alves and his TV editor Corky Ehlers try to marry stock footage of sharks in the open sea to the plastic, roaring puppet that creases on impact when chasing our heroes.

When mother shark explodes at the end, its pieces fly at the 3D screen, including pieces of flesh and liver, jawbones and intestines. Time for some shark sandwich, Shamu!

When 2D was Awesome.
In Flashback: A Brief History of Film, Louis Gianetti and Scott Eyman describe how the earliest “moving pictures” affected early audiences. These were 30 second “films” simply depicting everyday events – excerpts from boxing matches, dance acts, the surf breaking on the beach. Patrons would flinch every time something came towards them on the screen. It was not intentionally “3D” per se, it was just that people had never seen a picture on a screen “move” before! What an amazing thought! Has anyone ever considered that aspect when considering how a caveman might view movies or computers? If something “comes at you” it doesn’t have to be three-dimensional to scare you if you’ve NEVER SEEN a flat painting move.

THE ARRIVAL OF A TRAIN (1895, directed by Louis and August Lumiere): “Patrons couldn’t help but be startled as the train moved towards the camera – towards them. This was no painted flat, no stage illusion or obviously artificial construct… No wonder people panicked… The movies were a revelation even to sophisticates.”

And to think that 100 years later, even with the gift of hindsight, familiarity, and the knowledge that nothing can really touch you from the screen, all it takes to make an audience flinch is to plonk a cheap pair of cardboard “glasses” on them. Do we need any more evidence we’re all still cavemen?!