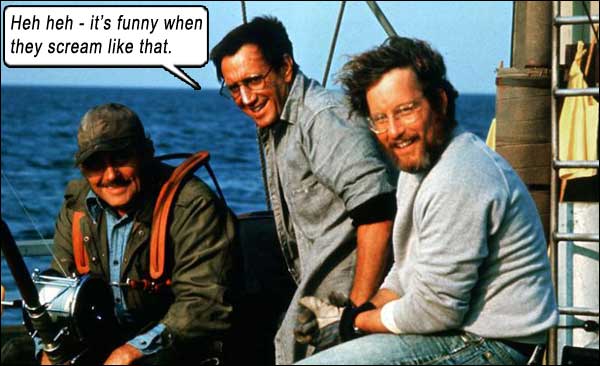 A Whale of a Tale.

Amity Island – a great place to get eaten. A white pointer shark is terrorizing beach vacationers and Sheriff Martin Brody (Roy Scheider) battles the tourist-minded Mayor Vaughn (Murray Hamilton) to keep the beaches closed. Death in the water and death upon land (for the tourist trade) forces the town to employ a grizzled seadog, Quint (Robert Shaw), a funky marine biologist, Matt Hooper (Richard Dreyfuss), and aquaphobic Brody to hunt the Great White down. 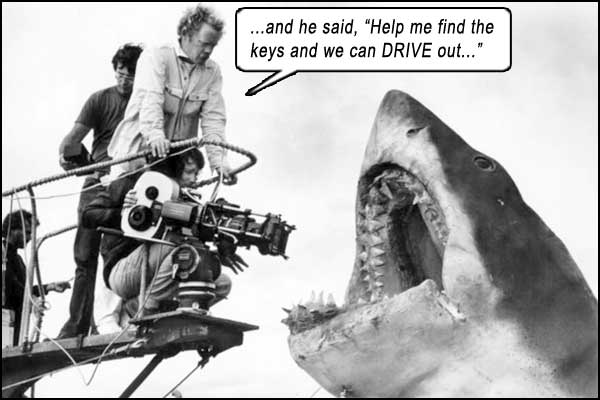 I still cannot explain why Method acting in the 70s was so much better overall than it is in the late 2000s. Look at Brody interacting with his wife (Lorraine Gary) and kids (the same interaction is masterfully captured by Spielberg in CLOSE ENCOUNTERS, 1977); look at the extras, not behaving like they’re one step closer to a SAG card, but behaving like hick islanders without a camera filming them; look at the snide asides between the excitable Dreyfuss, the intolerant Shaw, and the frustrated Scheider, inhabiting their characters like scales on fish.

And JAWS captures The 70’s Wench idiom; defining young women in the 70s, there was a hairstyle, a body style, a clothing style, a breezy attitude that women have somehow lost over all their sexual revolutions of the last decades. The opening scene of JAWS finds a 70’s Wench nude in the moonlit water, the first victim of the great white. 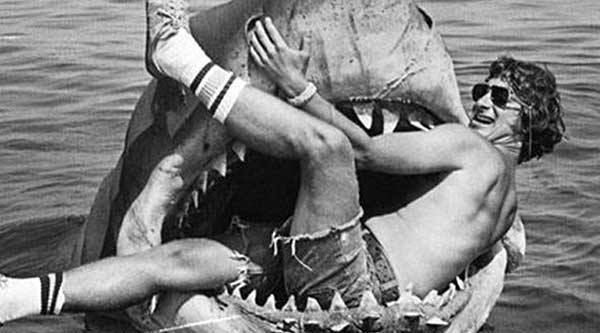 Steven Spielberg, dressed like he has just returned from the Gay Volleyball Finals, is eaten by a homophobic shark.

We do not see the shark. Because the model kept breaking down. (Not the 70’s Wench, the shark.) Nicknamed “Bruce,” the animatronic shark created for the movie was so erratic and unrealistic, Spielberg decided to keep it off camera as much as possible. Yet the few seconds we see Bruce’s dead, dead eyes and razorkill jaws are enough to cast an unworldly chill in our spines. And therein lies one of the great serendipities of movie-making legend. Spielberg has been credited with keeping the shark mysterious and thereby heightening the movie’s tension, when in fact, that decision was nothing more than working around budget and time constraints with a malfunctioning monster.

Movie deviates from Peter Benchley‘s 1974 novel of the same name. In the book, Hooper has an affair with Brody’s wife, the Brodys’ class issues with the upper-class island community are prevalent, Mayor Vaughn is in deep with the Mob, and Quint dies when a rope lashed to his leg drags him under with the shark (Benchley trying for an Ahab moment?). 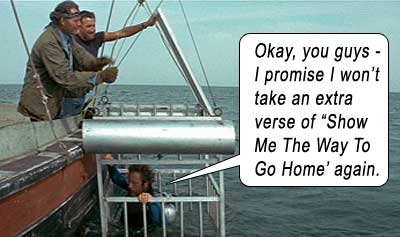 TV writer Carl Gottlieb was brought in to tighten Benchley’s screenplay (of which many drafts were rejected, according to imdb), restructuring the longwinded book into the compelling movie we love and fear.

In 1975, JAWS was not only the highest grossing film of all time (until STAR WARS would wrench that title from its fins in 1977), the head-game impact it made on the world depleted beach trade in the mid-70s; people stopped swimming for fear of sharks; untold shark television specials and documentaries were greenlighted, not to mention Peter Benchley’s average novel going “superbestseller” (was that before or after JAWS went supernova?).

All on accounta Bruce eating all those 70’s Wenches. And who doesn’t like to eat 70’s Wenches?