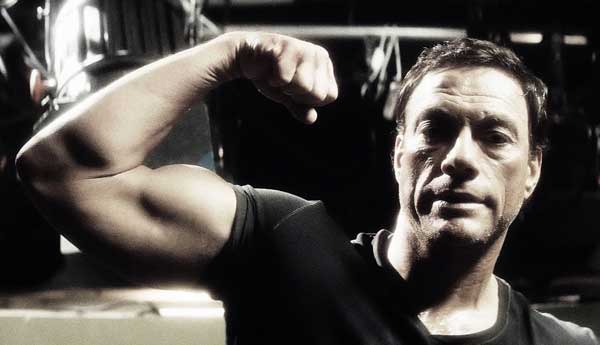 “To change that lightbulb, I’ll need to reach up there like this…”

Muscles from Brussels in Tussles.

This movie is so much gritty, guilty fun you need to go to confession afterwards.

In his home town of Brussels, Belgium, Van Damme unwittingly steps into a bank holdup and is taken hostage. In the confusion, bystanders and police outside the bank think the great Jean-Claude Van Damme (“he got out of this shithole and made something of himself”) is the bank robber. And the actual thieves go along with the accidental ruse.

What follows is a richly layered, self-effacing, dark comedy; in a world where Van Damme’s own legend proves his undoing and his salvation.

It’s almost the real world, self-referential, naturally-acted. And reacted. A young Arab shopkeeper complains to his friend about how Arabs are stupidly portrayed in American movies (“Ever seen the Arabs in TRUE LIES? How they act like excited hyenas?”), maintaining Chuck Norris gave Bin Laden the idea for 9/11, his friend dismissing him, “Yesterday it was Schwarzenegger.” These two young guys take fan pics with an impatient yet courteous Van Damme before he walks into the bank. 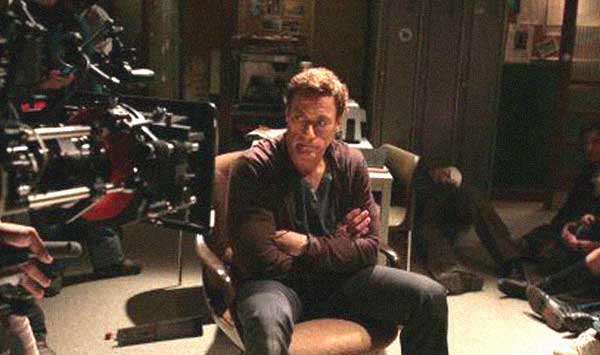 JCVD opens with a long, unbroken take of Van Damme in an extended action sequence which we realize is a “film” because his punches and kicks are clearly not connecting and the generic Mid-Easterners who keep coming at him are still getting bitchbeaten. When Van Damme walks off the sound stage to a young Asian director who treats him like yesterday’s trash, the self-parody is surprising at first, as he breathlessly complains, “It’s very hard for me to do this in one take – I’m 47 years old.” But as Van Damme settles into the role of “himself,” it becomes a brilliant, poignant, introspective take, rivaling the turns by Malkovich in BEING JOHN MALKOVICH or Shatner in FREE ENTERPRISE.

Mabrouk El Mechri directs, while the director of photography shoots Brussels through a gray-green filter that makes it look filthier and drabber than London in a Guy Ritchie film. Very appropriately, the DP’s name is Pierre-Yves Bastard.

JCVD delves deep into Jean-Claude Van Varenberg’s personal life to add painful grit to the action hero’s sheen. While Jean-Claude fights for custody of his daughter (against lawyers who use his violent film oeuvre as evidence against his paternal suitability), his agent is foisting weak film roles on him (which he must take to pay for his court battles), while his complicated financial situation gives him the supposed motivation to knock over the bank. Unfolding in non-chronological order, the film flits from backstory to the hostage situation and back, revealing more of Van Damme’s blackly funny predicament each time.

In its blackest moments, it still manages deep laughs. Due to the great acting. And being European – everything’s just better over there, right?

As rabid fans gather outside the bank picketing to Free Jean-Claude, as his shocked parents try to talk him out of killing hostages, as the thieves make it seem like Jean-Claude is running the heist, Van Damme must call upon his life experience in movies and physical training to deal with the farce – but this is no juvenile popcorn actioner where karate prowess takes down the bad men, rather, Van Damme’s skills are employed subtly and usually with a humorous twist.

Watch it in its original French language with English subtitles – unless you want to hear English dubbing worse than the American dubbing on MAD MAX. When Euros who can’t act dub English without being able to speak it properly first – unwatchable!

At half-time, we realize there is more to this movie than just cheap laughs, as Van Damme gives an unexpected, amazing, introspective monolog to the camera. Another long, unbroken take. Time Magazine‘s splash review exclaims, “He deserves not a black belt, but an Oscar.” I concur. No puns, no sarcasm, no joke. After twenty-five years in the industry, this once one-note muscleboy has found his acting/comedy one-two punch.