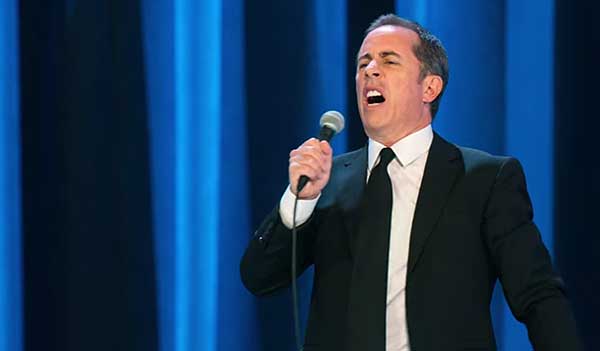 Jerry sees how much time he has left to kill in this Special, and the irony almost breaks his spirit.

In an effort to sound less vanilla, Jerry Seinfeld tries to “Carlin up” his 2020 Standup Special – and winds up just another shade of vanilla.

To comedy aficionados, the words Seinfeld and Carlin should not be uttered in the same breath (and I too am paying the penance for my utterance, by spending an extra hour tonight in my caning machine), but fear not, comedy maniacs, Seinfeld’s attempt at injecting meat into his set ends up like those early attempts at a veggie burger.

In JERRY SEINFELD: 23 HOURS TO KILL, filmed at the Beacon Theater on Broadway in March 2020 (just before that covid hammer came down and changed toilet paper to gold) Seinfeld steps out over the edge where Safe Jerry has been treading water these past few decades. (Ironically, the opening shows him leaping out of a helicopter into the deep waters of New York Harbor – killing us softly with a metaphor, Jerry, hmmm?)

The manner in which Jerry t-r-i-e-s to inject life into this particular set of social observations is very strange; he starts by praising his audience (not “thanking” them, mind you), for overcoming the rigors of life to be there, but then he immediately starts questioning their decisions; questioning the audience’s choice of friends, questioning the tolerance level of those friends; questioning the very decision to come see this show! One of his lines is: “Nobody – likes – anything!” It’s almost like he’s insulting his audience for choosing to attend this “made-up, bogus, not-necessary special event, which people put together to kill time” (which is essentially true, on a cosmic level) and then saying that he’s only there because he “had nothing to do either.”

It’s starting to look a lot like this Standup date was the last resort of a desperately bored man, rather than – what all performers lie to their audiences – THE place he wanted to BE tonight, for the fans, for the love… for the boys!… Crowd: “Oh, so we’re the only thing keeping you from slashing your wrists?” Yeh, lead us down that road, Jerry.

Then (with a winking nod to his wealth) he tells us he’d rather be somewhere else: “If you were me, would you be up here hackin’ out another one o’ these?”– whoa! You DO remember you’re Jerry Seinfeld, right? Not Bill Burr, not Lenny Bruce, not Ricky Gervais, and definitely not George Carlin. You’re the good guy – not the firestarter twisted firestarter!

Keep in mind, this is in the first ten uncomfortable minutes! Jerry’s getting laughs, and it’s actually drawing me in due to its (albeit blunted) cruelty – but I can’t help thinking that these are not jokes that a Seinfeld audience can weather for too long, and the Virtue Signalers and SJWs and pussywhipped pantywaists that have come to make up society must be holding their breath and white-knuckling their seats wondering when the insults to their fragile sensibilities are going to subside—

—And Seinfeld suddenly tacks back to vanilla territory: “Nonetheless, I am thrilled to be here. I love it here!” eliciting the biggest applause line to that point.

We shake our heads. I knew it couldn’t last long.

Then Jerry steps too far over the line in THAT direction: “I love you, you love me”—Hey whoa, whoa, whoa, Jer! Just because I clicked on the Netflix thumbnail, don’t presume I want your tongue in my rectum– #MeToo!

Directed by Joe DeMaio, 23 HOURS TO KILL levels out with Jerry mostly chugging along gleefully in his safe space – you know, those regular Jerry bits like “Why is [insert noun] so [insert adjective]?” – with occasional forays into slightly less mundane fare. Strangely, when Seinfeld does start to sound interesting, he sounds like Larry David (especially in the “personal life” segment near the end). It was David who created, wrote and produced Jerry’s signature TV show that dominated the 90s, SEINFELD, that gave Jerry’s voice an international platform. How killjoy it must have been then, when the creator of SEINFELD revealed himself to be a more potent comedy typhoon than its subject, and we realized how much of the creator was in the creation. (Thankfully for Jerry, Larry David’s curmudgeonly CURB YOUR ENTHUSIASM would knock us breathless only after Jerry’s insipid SEINFELD show had gasped its last Kramer.)

So don’t worry, Carlin fans, Seinfeld comes nowhere near sullying our Prophet of Mayhem. Matter of fact, this is the marketing synopsis for the special, “Jerry Seinfeld takes the stage in New York and tackles talking vs. texting, bad buffets vs. so-called great restaurants and the magic of Pop Tarts.” Heavy stuff. But pretty sure no one from Carlin’s estate will be calling him soon to sue for IP.

The last part of the show is dedicated to Jerry’s personal life. Truly looking fit and energetic, he says he loves being 65, because “when people ask you to do something, you just say no. No reason, no excuses, no explanation.” Well, when you’re as rich as Croesus, you sure can.

As someone who got married at 45, Jerry has one pearl of real wisdom: “Whichever side of marriage you’re on, you don’t ‘get’ what the other people are doing.” And I don’t think I’ve ever heard another comic talk about his wife in such a way that makes me truly fear he is the victim of psychological abuse! I mean, we’ve all heard the pandering-to-the-wife stories from a million comics, but is Jerry not crafting these jokes fully, or is this a cry for help? Can someone please send Jerry the number for the Spousal Abuse Hotline? I’d do it myself, but I’m too busy being single. 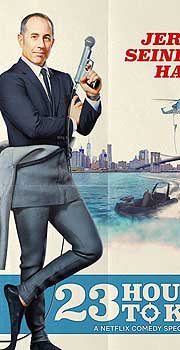 Jerry Seinfeld:
A View To A Mild Concussion.

Seinfeld has themed this Special to allude to James Bond, which explains the cheeky title that sounds like a Fleming book, and the movie poster that features Seinfeld in a Bond stance. The top half of his body is suited in that characteristic gun-hand pose, while the bottom half is garbed in a wetsuit.

As Jerry exits the stage, the Bond allusion kicks in again, as Secret Agent Man plays him off and continues under the credits and a behind-the-scenes featurette, showing him prepping for his leap into the harbor.

This gag is probably taken a bit far. What a logistical and physical nightmare this whole sequence must have been! I mean, is this the same guy who just told us that at his age he can just say no? Yet here he is, wetsuited up and taking practice dives with experts off the 50-foot highboard at a swimming pool! Full credit to this sexagenarian!! And they’re milking it, as they should, as I would insist if I were to do it! – when he takes that actual stunt leap, the camera goes to great trouble to track him clearly, so we are sure it is him falling to his death—I mean, yeh…

More logistics: there’s a 14-piece big band that opens the show, giving Jerry the Frank Sinatra treatment (Come Fly With Me). After the expense and organization to secure that swingin’ big band, to then use a recorded track of Johnny Rivers’ Secret Agent Man for the outro is such a waste! How much was the band asking to stay and give that song the big band treatment for the outro? I’m sure you could have built it into your ticket prices, Jerry! Oh, and you’ll need vocals as well: I know at least 20 singers who would’ve done that gig for the bargain-basement boasting-rights fee of just $200, myself included ($100 for the rehearsal, $100 for the show, plus accom and airfare, thanks Jer!). 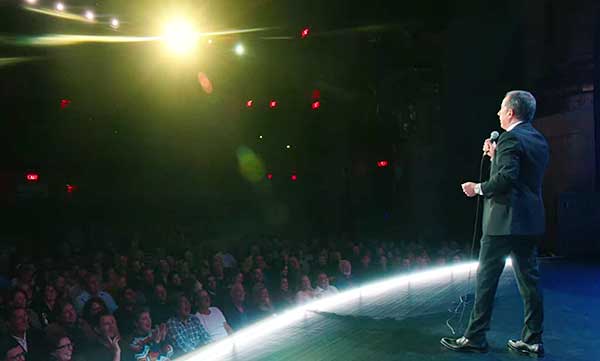 And yea, the Star Of Bethlehem did visit Jerry’s 2020 show and was heard to say,
“Yes, but Peter did this same shit better in Galilee in 14 BC!”

23 HOURS is just so… shallow. It reminds me of Eddie Murphy’s DELIRIOUS, not in style, but in a sociological sense: purveyed by a craftsman, filled with tepid jokes that were howlers in their day, with no staying power except as legacy material. And – like DELIRIOUS – the last 5 minutes of 23 HOURS is also a painful grimace as Jerry overstays his welcome by just that little bit.

His last special was in 1998 (I’M TELLING YOU FOR THE LAST TIME). Think of all the things that have happened in the world since then. Now I’m not suggesting Jerry give a history lesson covering 9/11 to Dumbo Donald – but get a little craftier than Pop Tarts, man! We’re gonna need a deeper dive than sensors on toilet seats and dancing around the sensor on a public sink to make it work. (These bits are actually stolen and updated from Jerry’s own 1998 Special! Or is he hoping we’ll regard it as a smart tie-in across two decades?) I know the comedy world rationalizes your bits as ‘distilling the absurdity of everyday life into quotable nuggets,’ but *I* think you’ve just been listening to drunk guys at Dennys at 3 a.m. I mean, the sink not working is actually a bit? After 20 years of the modern fucked-up world turning under your nose?!

And that’s another thing: I’ve grown to distrust comics who don’t swear (cough-Cosby!). If they’re good, they can carve a career with it (Brian Regan, Jim Gaffigan, Steven Wright), but if they’re mediocre (cough-sorry Jerry!) they’re hiding something.

Far be it for me to criticize this man who can buy my body 12 times over, but you want an example of hiding something? That bit about toilet stalls not going all the way to the floor – YouTuber ThatComedyGuy points out that’s a George Costanza bit from a SEINFELD episode!  er… AWK-ward… And if Jerry is gonna steal from his own bits – stealing to fill just a one-hour routine, mind you – what else can this psychologically battered housewife be hiding from us? (Social Services, I’m telling you, call this guy!)

For Jerry fans – he done good! He’ll always be immortal. (I somehow feel like there’s a Venn diagram crossover between Seinfeld fans and Dumbo Donald fans. Anyone that considers Jerry a genius, with that outdated mode of comedy and its trite subject matter, would probably fall into one of those circles. However, I’m guessing the fans at this Special must be the richer ones with good dental. Someone do a survey and get back to me.) To Jerry fans, he’ll always be the King Of Comedy (unlike that other Jerry who is the REAL King of Comedy). I got no beef with that.

How can I have a beef with veggie burger?