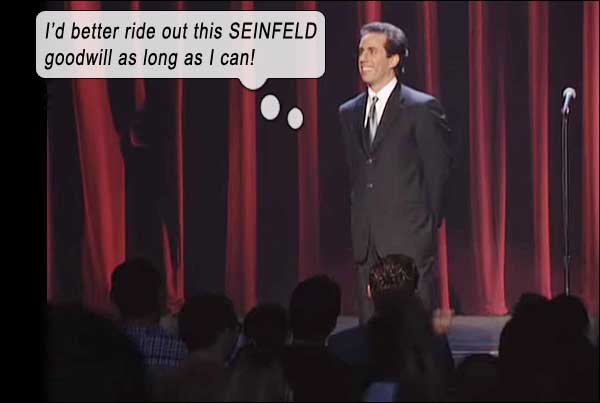 I’m Telling You So You Won’t Waste Your Time.

Looking like a cross between John Travolta and Jon Stewart, 44-year-old Jerry Seinfeld launches his second Standup Special with the force of an atom bomb being stopped from exploding.

With a star-studded cold open funeral skit that features the greats George Carlin and Garry Shandling, the goods Paul Reiser and George Wallace, and the what-the-hells Jay Leno and Ed McMahon, Jerry gives a eulogy at a cemetery, near an open casket that contains all his old comedy bits. At this Special’s release, Jerry’s unfunny-yet-dambusting TV show SEINFELD had aired the final episode of its nine-season run merely three months ago (May 1998); with the last five seasons in the Top 3 Nielsen ratings, Jerry somehow found himself on top of comedy’s golden mountain. With this Special, he was determined to prove he didn’t belong there.

It’s great seeing the legends George Carlin and Garry Shandling alive again in this bit. That’s about it. The premise is that Jerry is going to be telling these old faves [Seinfeld voice] for the last time. (20 years later, we would find he was lying, as he cherrypicks bits from this Special to pad his next Special.)

Directed by Marty Callner, filmed at the Broadhurst Theatre in Manhattan, New York, I’M TELLING YOU FOR THE LAST TIME is an inconsistent airing of scattershot material, seemingly with no particular rhyme, reason or throughline, exhibiting simultaneous brilliance and uncrafted thuggery. The problem is that the good material doesn’t string the bad material along; it exposes those bits as filler. It’s like eavesdropping on some guy talking to his friends in a diner; we’re stuck listening to all the peaks and valleys… I honestly have never understood how Jerry Seinfeld rose to comedy god status in America; which lowbrow demographic put him there?

Who ARE these people?

He covers: kids versus parents (observant); thinking his Halloween Superman outfit was “the actual costume that Superman wears” (cute); bathroom sinks at airports just allowing us a dash of water (we’re with you, man!); “impressed by Chinese people sticking with chopsticks after seeing the fork” (haha!)…

There are two bits that are laugh out loud funny: buying maximum strength meds: “Just figure out what will kill me and then back it off a little,” and the bit about Silver medals at the Olympics, showing us how inconsequential the finishing time difference is between the guy who goes down in history and “never heard of him.” These bits are so good that we wonder why Jerry feels the need to talk about a businessman turning on all the sinks at an airport and running around in spite. Oh yeh, that filler.

There is a feature segment about men and women, which is the most consistently funny segment. (“I’m a single man. No other men are attached to me.” / “What were the Apollo astronauts doing with a car on the goddam Moon anyway?” implying it was the inbuilt desire to pick up chicks / “Dating is a job interview that lasts all night.”)

Marty Callner also directed Carlin’s very first HBO Special in 1977 (ON LOCATION: GEORGE CARLIN AT USC). I really wonder what he must have thought of this weak sauce. Carlin had Seven Dirty Words. Seinfeld has Seedless Watermelons.

Jerry Seinfeld possesses a unique style that can be mimicked and satirized, so that ease of representing him has allowed comics and civilians and schoolboys to mimic him through the decades, and that wealth of imitation has spawned a conflation of Jerry’s abilities with the abilities of those who “do” him. Jerry is a good comic – his mind works creatively, his stage presence is watchable, his fun is apparent, but the majority of his jokes are like someone cut the red wire before the numbers ticked down to zero.