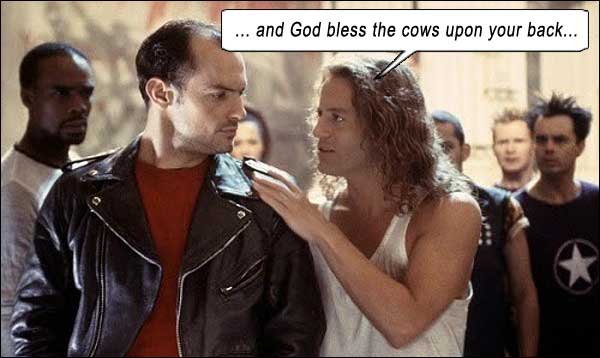 Anytime one of us old codgers over 35 is exposed to a re-working of what we consider a “classic,” we approach it with trepidation, fearful our fond memories will be sullied by some upstart’s new vision. And yet…knowing that curiosity never really killed anything, we unbutton our leisure suits and expose ourselves nonetheless…

On this night I was much glad for soaking in this rock-opera which I have grown to know so well that I can pinpoint single substitute lines in newer productions (spare me the pathos, I call it retention skills) – the new JESUS CHRIST SUPERSTAR film. Unlike TOMMY, Pete Townshend’s contribution to the pantheon of messiahs in tight trousers, which has suffered ingloriously at the hands of buffoon “modernizers,” SUPERSTAR has somehow retained its glorious and gritty mien through the ages.

Filmed with the intent to retain its stage-play look, the production was thus filmed on indoor soundstages, with lighting provided by spotlight, cyberlights and par cans, retaining a “rock” bent. Norman Jewison’s original 1973 SUPERSTAR incensed half its target audience by updating the Judean era to the 1960s flower-child milieu; this production has been updated to an apocalyptic future (an ambiguous period, having been postulated no end and still not arrived at – hey, it’s 2001, where’s my flying car, man?!), insurrect graffiti on walls, sparse iron-barred concrete structures, designed to appeal to a generation too hip to be into Christ. Until now. 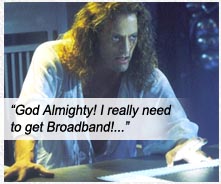 Pandering to pseudo-Orwellian grittiness, Roger Kirk’s costume design outfitted the Bad Guys (Roman soldiery) to please the most dedicated leather-fetishist, taking his cues from Keanu in THE MATRIX and Our Man Darth: Black helmets, nightsticks, high leather boots, thick studded belts, ankle-length black capes – a hair’s breadth away from the theme of the main float in the last Gay Mardi Gras…

Soundtrack is completely re-recorded for this production, with its signature four-piece-band element over the top of an orchestral backing. Not since Deep Purple’s Concerto for Group & Orchestra (1968) has there been such dynamic symbiosis between two such disparate idioms. Unlike the 70’s SUPERSTAR session musicians, who displayed a fluidity and looseness which was intrinsic to their day, these new wonderboys with electric appendages smeared their bloodshot session-streetsmarts over the audio tracks like the stormtroopers who beat into the apostles like gay Darth Vaders. They bit. They snapped. Ultimately, the shift in era necessitated this tougher rendition of the music – the drum tracks especially gain from Y2000 production techniques – and this vigorous aspect of the new SUPERSTAR makes up for some of the less-than-exclamatory vocal iniquities.

Glenn Carter, veteran of the 1996 London stage production, where he played Simon (and somehow resembling a composite of all four Gibb brothers) is Jesus, while Jérôme Pradon (who could pass for Quentin Tarantino’s stunt double) is Judas.

Ultimately: how did Carter and Pradon, under Edwards’ direction, hold up against the 1973 power-trinity of Ted Neeley, Carl Anderson and director Norman Jewison (who produced not the first incarnation of SUPERSTAR, but definitely one of the most revered)? Granted, the upstarts did not outshine the Masters – so much as shine in their own right.

Carter’s voice is Roger Daltrey’s without the grit. Yardstick of every Savior Wannabe is Gethsemane. Ever since stratospheric Steve Balsamo in the 1996 London production made it a staple to hold that high G (G5) throughout the 5/8 breakdown, every son-of-a-god vocalist must conquer this Everest to be considered even remotely divine. Carter fell from grace about halfway. Though his highs are excellent, they are not stunning – but then, even Balsamo could not top the sheer grandeur of the Almighty Ted Neeley, whose encephalon-splitting banshee ululations in the 1973 movie were not even topped by Ian Gillan (Deep Purple’s wonder-shrieker) on the original 1970 London studio album. Some reviews compare Carter’s acting to the block of wood he is ultimately astride, but he displays as much thespianism as required to convey what he needs to, within the confines of a largely sung performance (a furtive look here, a knowing glance there, conveying unspoken volumes). 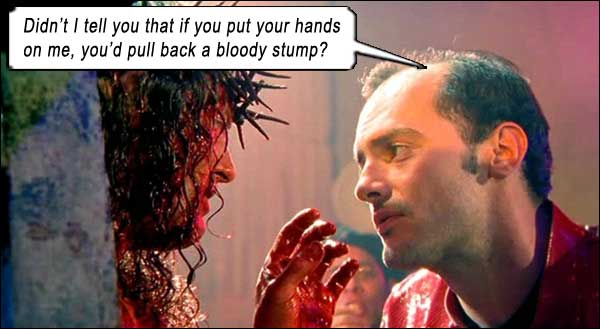 And Pradon? Opting to emulate the rambunctious Carl Anderson’s rocket-sauce vocal acrobatics (“The” Judas of numerous productions from 1971 to the present, including the ’73 movie) guaranteed that Pradon’s venial vocal sins would be forgiven.

Pontius Pilate (Fred Johansen) is a surprise bit of casting – no petulant Roman procurator, wizened on a diet of figs and sodomy, this powerful baritone is a head taller than Jesus and broader in the shoulders than The Terminator, his muscled breastplate looking for all the world like he is simply wearing a t-shirt over his real muscles. Which kinda spoils the fun – for the dynamic between Jesus and Pilate has always been one of a powerful man in name, meeting a powerful man in spirit.

Though Rik Mayall is a Champion Sneerer, and though King Herod’s role calls for just that, his lack of vocal talent had him struggling valiantly to keep apace of his musical stage veteran compatriots – alas, though he has performed vocals minimally in the past (most notably with his parody band Bad News), one wonders how he was not cast out of the cast within seconds of opening his tuneless mouth.

The title track’s visualization is a new concept: staged, as it were, like a media event, Judas bedecked in leather, singing into broadcast cameras, a repeater screen blaring the visuals, boom mikes crowding Jesus’ cross-carrying form; updating the scene to reflect what would have transpired had Jesus – as Judas sings – “come today.”

Fond memories retained. Not the definitive SUPERSTAR, yet sincere enough to uphold a grand tradition. Behold, it is good.

Jesus Christ Superstar
DUNMORE RANT:
CALL ME GOD
(and I’ll still respect you in the morning)