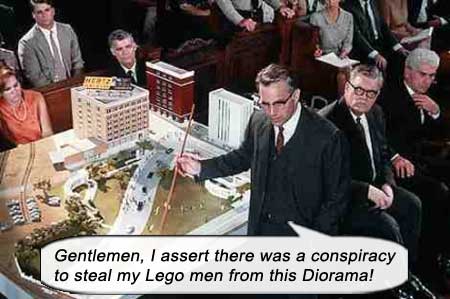 To sin by silence when we should protest, makes cowards out of men.
–Ella Wheeler Wilcox.

When it comes to 9-11, or John F. Kennedy, or Jesus Christ, no one cares what you think. They know what they know. And no one’s gonna tell ’em otherwise.

Oliver Stone doesn’t care what you think. He directs JFK with the hand of a gunslinger and the eye of a croupier. And you can either accept the fact this truth-seeking movie exists (note I said truth-“seeking” not truth-“ful”), or whine like a petty hyena nibbling around the kill of a feasting lion, because it’s not what you were told to think.

JFK details the deep background behind the assassination of American president John Fitzgerald Kennedy on November 22, 1963, using the Abraham Zapruder film as a starting point. It doesn’t seek to “prove” anything insomuch as “disprove” the Lee Harvey Oswald Lone Gunman Theory. Again, if you are one of the close-minded who wish to accept the bent Warren Commission Report as the “official” truth, keep believing in altruistic government. But even the United States Congress officially admitted there was a “probable conspiracy” surrounding Kennedy’s suspicious murder. A title card tells us a congressional investigation of 1976-79 “recommended the Justice Department investigate further. As of 1991, the department has done nothing. And the files of the House Select Committee on Assassinations are locked away until the year 2029.”

A mystery wrapped in a riddle inside an enigma.
–Joe Pesci as David Ferrie, JFK.

Kevin Costner stars as U.S. attorney Jim Garrison (whose 1988 book On the Trail of the Assassins inspired the movie, along with the book by Jim Marrs, Crossfire: The Plot That Killed Kennedy). Though many people at the time smelled something fishy in the whole operation – not least, the many witnesses in Dealey Plaza whom Garrison interviewed, whose reports differed wildly from the “official” Warren Commission ketchup – Garrison was in a position to do something about it. In an unforeseen irony, by putting the murdered Lee Harvey Oswald under the microscope, studying his character, affiliations, marksmanship and politics, his whereabouts and movements, Garrison and his team discover that Oswald couldn’t possibly have been the lone shooter, let alone fired three bulls eyes in rapid succession (it became doubtful he had even fired a single shot), and was probably what Oswald himself claimed to be – a patsy. 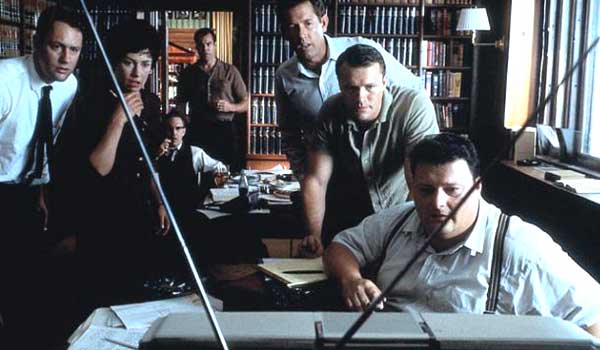 “Hey you guys, the CIA’s staged assassination of the president is on TV tonight!”

Chameleon Gary Oldman is Lee Harvey Oswald, here portrayed as a rudderless communist agitator. Everyone surrounding these two main players in this drama is a familiar face, a recognizable character actor, if not an A- or B-list star: Jack Lemmon, Ed Asner, Michael Rooker, Vincent D’Onofrio, Walter Matthau, Laurie Metcalf, John Candy, Jay O. Sanders, Frank Whaley, Wayne Knight, Kevin Bacon as a rentboy, Sissy Spacek as Garrison’s long-suffering wife, and Brian Doyle-Murray as Jack “Ruby” Rubinstein, Oswald’s killer. (With Oswald’s murder, more questions: Was it a simple revenge killing? Or – before any legal testimony could be coaxed from him – was it a sanction?)

Joe Pesci is David Ferrie, an unbalanced Cuban sympathizer (when is Joe Pesci not unbalanced?), with a wig that just won’t stay straight; Tommy Lee Jones is Clay Shaw, a whacked-out homosexual businessman who, through a circuitous association with Cuban sympathizers, is the only person ever brought to trial for the assassination of Kennedy. A large part of the movie’s dialogue-driven intensity is the Shaw trial, Garrison prosecuting, laying out assassination details step by step. Donald Sutherland makes a covert cameo as a black ops agent who explains the deep background on the government’s and military’s involvement in the assassination, reinforcing our suspicions of the ubiquitous “They.”

As “Mister X,” Sutherland details how events played out that day to a script written by They: Kennedy’s security detail quashed, his motorcade taking an unplanned turn into Dealey Plaza which was not properly secured, the car slowing to 10 mph against protocol, the roof down, the three angles of ambush, his own department sent on a wild goose chase to avoid stepping on the assassination, and so on. In some countries, the “official” versions of the event were made public before they actually happened! A patsy. A setup. A plan falling into place. The lone gunman theory forced into the world media. “They” put forward the Theory and made Oswald fit that theory.

In testimony, Garrison outlines where all the other shots strayed that day, deducing that, “A single bullet now has to account for the remaining seven wounds on Kennedy and Connally [Texas Governor in the front seat of Kennedy’s limo] – but rather than admit to a conspiracy or investigate further, the Warren Commission chose to endorse a theory put forward by an ambitious junior counselor, Arlen Specter; one of the grossest lies ever forced on the American people. We’ve come to know it as the Magic Bullet theory.” [Magic Bullet theory: a bullet that turned in midair twice in order to create the entry and exit wounds on the two men.]

Yes, that Arlen Specter (1930-2012). The senator from Pennsylvania. In 1963, he was a Democrat, flipping to Republican in 1965, then flopping back to Democrat in 2009 (because he knew he couldn’t win reelection as a Republican – how’s that for snide, hubristic and arrogant?). Just as Garrison used diagrams and real people to illustrate the path of the “Magic Bullet,” Specter made people sit in various positions to illustrate how one bullet might have somehow done all that damage. Specter died just recently (Oct 2012), which means there was a modern politician who knew guarded secrets about the Kennedy assassination. It is obvious to any rational person that the Magic Bullet theory is a grand illusion, meaning Specter himself knew this, meaning he knew the morbid truth behind the assassination. Did no one think to beat the shit out of this guy to get some answers?

Another person that needs the shit beat out of him is attorney-author Vincent Bugliosi, who maintains with an ingénue’s certainty that his investigations into JFK’s assassination lead to Lee Harvey Oswald as the lone gunman. I admire many of his books (notably Helter Skelter, 1974, and The Prosecution of George W. Bush for Murder, 2008), yet I cannot forgive him promoting this wayward idea that there was no conspiracy. No one is saying – not me, and not the movie JFK – that we know exactly who the conspirators were or exactly how the plot jigsaws together; we just realize through evidence that there is more onion under the surface spin. But the official sources who forcibly push the lone gunman theory continue to shut down any sincere inquiries to reconcile the disconnects. “…rather than admit to a conspiracy or investigate further…”

The term “conspiracy theory” has developed into a negative-baggage hammer against anyone who contests the milky, full-of-holes “official” version. (Like the term “grassy knoll” has entered the vernacular as a gag, cited in relation to something not quite kosher.) In the end, the lone gunman has become its own conspiracy theory, because those who endorse it also believe there is an organized group of contras trying to disabuse them of their “faith” in it. But consider these Conspiracy Facts:

“They” ordered the limo full of blood to be cleaned and reconstructed; They ordered the attending doctors not to report correctly on their examinations of Kennedy’s wounds; They superseded all the surgeons’ protocols with military procedures, They spirited away Kennedy’s body before an independent autopsy. Testimony of witnesses was either ignored, edited or destroyed – provided the witnesses themselves did not mysteriously die; arrest records of all the vagrants in the area directly after the shooting went missing… and on it goes. No truth anywhere. None.

Who are “They”? Because there are no answers, everyone is implicated – from the CIA to the FBI, from Cuban sympathizers to the American military and the White House.

During this trial, Martin Luther King Jr. was killed. Then Bobby Kennedy. Imagine the tenor of the times – the world was coming apart at the seams. The killers of both men would be claimed as scapegoats to conspiracies, which the film never pursues. It’s too big. Too big to nail. How deep does it all go? We’ll never know. Garrison would later ask his jury, “How many more political murders disguised as suicides, overdose, heart attacks, car crashes….?”

The Zapruder film is its own character here. In essence, JFK is a film made about that film. If it didn’t exist, the Kennedy Assassination would have been an entirely clean sanction.

In carefully staged match-cuts, Stone expands the original grainy footage to take in many angles to give us a more complete perception of the tableau: in Zapruder footage, we see a little girl skipping along next to Kennedy’s limo – cut to closeup of the little girl (Stone’s footage); in Zapruder long shot, a woman waves frantically near the president’s limo – cut to closeup of the woman (Stone’s footage), and so on. It is the most intimate we’ve ever experienced Zapruder, and thus the most disturbing: to see either side of that moment when a human possessed Life and then did not. One minute, he is smiles, expectancy, plans, aches, anxieties, breeze in the hair, memories – the next, Life is gone. Zooming into blurred closeup, we see skull shattering, the infamous “red mist” spoken of by bloodthirsty American sharpshooters, a flap of red skin flying off the head, yet still connected by tissue, the body moving in concert with bullet impacts – sideways, downwards, and then “back and to the left.”

Back and to the left.

Garrison belabors this point for his jury: Back and to the left. Physics. Action-Reaction. When bullets come from different directions, a body will move in reaction to physics laws. Garrison reasons that if there was more than one bullet – and every frame of Zapruder film and resultant reaction points to more than one shooter – then it must by definition be called a conspiracy. That’s all that conspiracy means – more than one person involved.

As his closing argument, and closing the movie, Garrison gives a thunderous Movie Speech; he cajoles, he weeps, he NETWORK‘s, he BRAVEHEART‘s, he Sermon-On-The-Mount‘s… and then does a throwback to the 1950’s “moral tale” movies (when mankind was “tampering in God’s domain”) – he looks directly into the camera and says, “It’s up to you.” The American people. “Do not forget your dying king; show the world this is still a government of the people, for the people, and by the people…” Of course, it falls on the renowned deaf ears of the American people. Garrison, to this date, is the only person to hold a trial in relation to Kennedy’s murder. Clay Shaw was acquitted. It was later revealed he was ex-CIA…

The bigger the lie, the more people will believe it.
–attributed to Joseph Goebbels.

Whodunnit? We’ll probably never know. The fact is – it was done. And more than one person was involved. And for that to happen at such a national level, and for the coverup to be so extensive, those involved had to be in positions of unimpeachable authority. Jesus Christ, John F. Kennedy, 9-11. You believe what you want to believe. Next you’ll be telling us the Earth is flat… 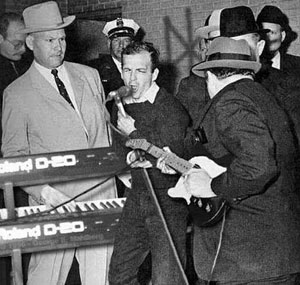