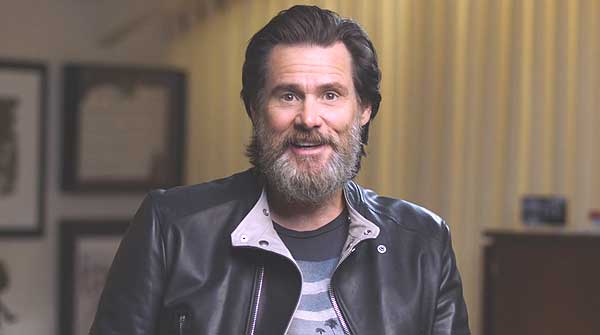 Is Jim Carrey’s soul as big as his beard? You decide.

Of Comedy and Molecules.

Introspective prophet Jim Carrey sits down with his beard and reminisces about the takeover of his body by Andy Kaufman while filming MAN ON THE MOON.

A calmer Jim Carrey than we’ve ever seen before, sits down with director Chris Smith in JIM & ANDY: THE GREAT BEYOND, to discuss the filming of his 1999 biopic MAN ON THE MOON, where he played iconoclastic entertainer Andy Kaufman, and how Carrey’s channeling of Kaufman’s sui generis persona during that shoot changed his outlook on the meaning of life itself.

It’s a deep dive, and Jim challenges us to follow him.

We wade through behind-the-scenes footage of MAN ON THE MOON, interviews with cast members (Danny DeVito, Paul Giamatti, Judd Hirsch, etc.), Andy’s longtime collaborator Bob Zmuda, Andy’s girlfriend Lynne Margulies and Andy’s parents Stanley and Janice, and we find that Jim’s mental pilgrimage takes us as much into the mind of Andy as it does into his own.

Andy Kaufman (1949-1984) was revolutionary. Never “just” a comedian (which is how he is usually pigeonholed), Andy was always pushing the envelope, milking the gag, driving society to the edges of its norms, or – as they call it in the Catskills – stirring up shit. (“Andy Kaufman cared less about making his audience laugh than keeping them confused.” — Matt Lauer.)

Soon after Jim won the role to play his idol Andy, he tells us that Andy “visited” him; just came into his mind as Jim was looking out over the surf wondering how to find a way into the character. And – so Jim relates – Andy told Jim, “That’s okay, I’ll take over from here,” and Jim’s decision was made: to remain in character (or – if we are to believe Carrey – Andy’s decision was made to remain in Jim) during the full production.

Jim relates how this decision affected his cast mates and his Oscar-winning director, Milos Forman (ONE FLEW OVER THE CUCKOO’S NEST, AMADEUS). They all claim it was disconcerting at first. Then everyone had to play along or the production would have stalled. Danny DeVito still can’t get over it. Forman is seen speaking to Jim, calling him Andy, and trying to reason with him as one would a difficult child. In all these behind-the-scenes clips Jim is 100% immersed in Andy. Or Andy is 100% controlling Jim. Either way you look at it, it’s even disconcerting to us viewers! In fact, Jim says the studio forbad the release of the behind-the-scenes footage in conjunction with the movie because they didn’t want the public to think Jim was an “asshole”!

In a strange case of meta-casting, many people involved with Andy play themselves in MAN ON THE MOON (such as David Letterman, and some of the TAXI cast – Marilu Henner, Christopher Lloyd, Jeff Conaway, Carol Kane, Tony Danza), most notably, wrestler Jerry Lawler… Back in the ‘80s, Lawler wrestled Andy, to dispute Andy’s self-proclamation as the “intergender wrestling champion of the world,” after wrestling numerous women.

Jim, who found himself asking, “What Would Andy Do?” would keep Lawler on his toes, constantly egging him into actual anger with insults and childish tomfoolery. Lawler (who admitted years later that his feud with Andy was a jape, and that they were good friends in reality) was discombobulated on whether Jim was acting the dick or actually being one. In a case of life imitating art imitating the fake feud, Lawler actually hits Jim hard in the film (at Jim’s prompting), during their scene on the Letterman show – the same way he supposedly hit Andy hard on that same show. Back then, Andy was taken to hospital, the public not knowing that it was “kayfabe” (the wrestling insider term for a staged event) – and now here was Jim being taken to the hospital, but neither the public nor the production knew whether Jim was faking it or not. Andy would like that.

No one kept the cast and director more on their toes than the mercurial force of nature known as Tony Clifton, Andy’s alter-ego lounge singer. In a fat-suit tuxedo (usually pink), with bowl-haircut wig, sideburns, dark glasses and an attitude set to Total Obnoxious, Tony Clifton would barge onto the movie set (usually with a hooker on each arm), make outrageous demands, insult everyone (including Jim Carrey and Andy Kaufman) and make life miserable for all who came in contact with him. We know that Tony succeeded in whatever his endgame is, when we read the full subtitle of this Netflix special: JIM & ANDY: THE GREAT BEYOND – FEATURING A VERY SPECIAL, CONTRACTUALLY OBLIGATED MENTION OF TONY CLIFTON. He was probably Andy’s most brilliant creation… 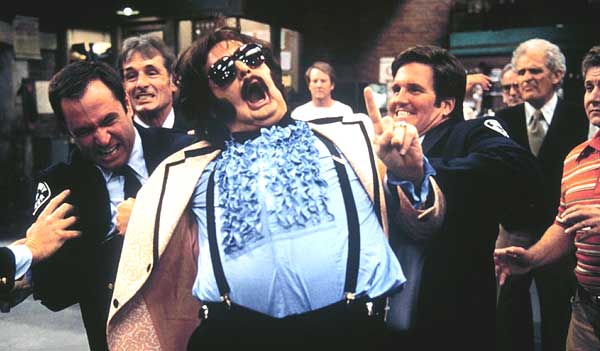 Let’s face it: Even if Tony Clifton didn’t have a contract, he would STILL find a way to be in this movie. Just to insult Andy Kaufman.

And in going so deep into Andy (or Andy so deep into Jim), Carrey comes away from MAN ON THE MOON seemingly more at peace with himself, the industry he is in, and his fanbase: “At some point, when you create yourself to make it, you’re going to have to either let that creation go, and take a chance on being loved or hated for who you really are, or you’re going to have to kill who you really are, and fall into your grave, grasping onto a character that you never were.”

And this person now – says Carrey – is who he really is. His beard agrees. He has come a long way from the face-pulling, body-swerving, ass-talking juggernaut of his youth. Back then, Jim believed audiences wanted his blood, bone and soul when performing. And he gave of it, freely and fully, over-compensating lest he be judged unworthy of their love. However Jim himself implies that he didn’t need to go that far, as he wakes us to a life lesson he discovered about audiences: “They want to be free from concern.” A lesson for every performer to take to heart, and onstage. (It is portrayed here that Jim’s early freneticism was something psychologically aberrant, like a cry for help because he so wanted to be loved; but no one considers – not even Jim – that it was precisely his outrageous iconoclastic personality “disorder” that made him the megastar he is today, with the luxury to turn his back on fame.)

Away from the bright lights of the industry that he ruled for a few breakneck comedy years, Jim says he can breathe again. He actually believes he is no more; that nothing called “Jim Carrey” exists any more in space and time. And that, he says, is where peace lies. He sees himself as a conglomeration of molecules whirling in the cosmos with no rhyme or reason (which is technically true), and in a number of interviews he has given in recent years, he has said as much, blowing some people’s minds and making others very concerned.

Jim talks sparingly of his other movie roles, and how each of them spoke to him in some way, most notably THE TRUMAN SHOW, where his character Truman Burbank was being filmed by thousands of cameras in a gigantic bio-dome city, in a simulacrum of real life. That movie’s plot – was Jim’s actual life during his halcyon days: in a bubble, the world looking in at him, while he was trying to find a way out. He says he has found that way…

(You can even see me hedging my belief in this being the real Jim, in my use of “He says,” as if an outside observer who is not to be trusted is talking about Jim, rather than the man himself. And surely, Jim himself casts doubt over his own grander-than-thou proselytizing when he appears in junkets for this film, clean-shaved, inshape, with expensive couture that surely must be rubbing his higher-consciousness molecules the wrong way.) 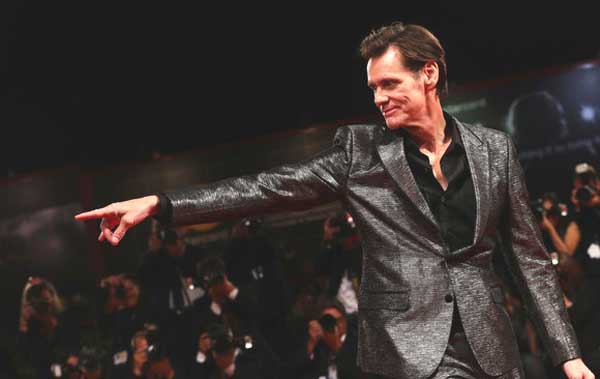 Back when he was making the pioneering salary of $20 million for his role in THE CABLE GUY, there was much talk about that $10 million check that Carrey had written to himself when he was a janitor, in the hopes of cashing it when he was rich. We all took it for granted Carrey had cashed it somewhere between THE CABLE GUY (1996) and LIAR LIAR (1997). Now we discover that he put it, uncashed, into his dad’s coffin. (His father never saw Jim become the megastar he would one day be, only seeing the rise of his son’s career with ACE VENTURA: PET DETECTIVE (released February 1994), and dying 3 weeks after THE MASK was released, in September 1994.)

In 2010, Joaquin Phoenix did a performance-art experiment on Hollywood called I’M NOT HERE, to reveal its fakery, hypocrisy, venality and stupidity. It’s something Andy might have done; a long con to prove that nothing is real.

In his 2014 film DUMB AND DUMBER TO, Jim’s character pulls a long con, spending 20 years in an asylum pretending he is catatonic, just to play a joke on his best friend.

Now, in 2017, Jim Carrey, the intelligent, lucid, articulate and rich actor, doesn’t have to pander to anyone’s notion of who he must or should be any more. He can continue acting in films should he decide to, or he can give it up altogether if it seems beneath his conglomeration of molecules. Yes, Jim could be on some elevated plane, looking down on us mortals from his perch of higher understanding; or he could be playing the Socratic hermit as a long con joke on a society he is exposing for its fakery, hypocrisy, venality and stupidity.