An uninspiring movie about an inspiring innovator, JOBS is a schmaltzy biopic of Apple Computer’s pioneering founder and edge-of-science-fiction visionary, Steven Paul Jobs (1955-2011).

JOBS (written by Matt Whiteley and directed by Joshua Michael Stern) turns the life of this driven inventor madman thinking machine into a soppy three-act melodrama that hits all the requisite Hollywood beats. No wonder Ashton Kutcher plays Steve Jobs. Funnily enough, the problem with this unfocused movie is not that the star of DUDE, WHERE’S MY CAR is Jobs (Kutcher gives a studied, terse performance and actually looks like the young Jobs), it’s how the movie is put together as if it’s your typical fictional character overcoming adversity. 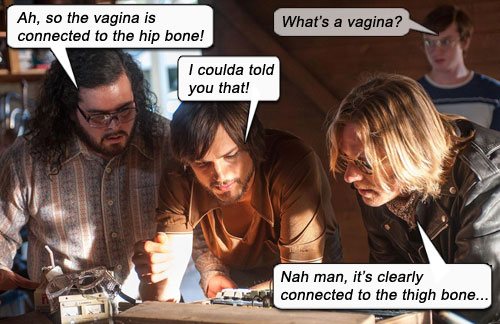 Taking the documentary STEVE JOBS: ONE LAST THING (2011) as corroboration, it would seem Jobs’s less savory personality traits and deeds are correctly handled in JOBS: the fact he is painted like an eccentric prophet, an innovative artist in techno mind-freak, who didn’t care about the feet he stepped on or the feelings he hurt to get his way; the fact that he abandoned his close friends when he could find no use for them anymore; the fact that he was not the hands-on guy, but the entrepreneur, the marketer, the “producer” if you will, that made all the elements of his projects come together; he had a knack for relating the technology to the reality: “What did the garbageman, the schoolteacher, the kid in Nebraska need from a computer?”; he could bridge the gap between the techs who soldered the raw parts and the marketers who shilled the finished product.

JOBS deals mostly with young Steve Jobs and the coalescing of his fresh-faced team of pathfinders; onto the formation of Apple, its nationwide success, his subsequent ousting from the company and triumphant return. The movie opens with middle-aged Jobs unveiling the iPod, but it doesn’t circle back to this point (bad screenwriting setup with no payoff). Final two-shots show us the actors and their real life counterparts.

Josh Gad is best friend Steve “Woz” Wozniak, who did the heavy lifting when they were young (i.e. the solderer); Lukas Haas is engineer Daniel Kottke, who backpacked across India with Jobs; Victor Rasuk is computer engineer Bill Fernandez (who takes credit for introducing Jobs to Wozniak, not shown in the movie). These three would ignite the core of Apple in Jobs’s father’s garage. Rod Holt (Ron Eldard) would join them as electrician. Dermot Mulroney is investor Mike Markkula, whom Jobs impresses with his canny negotiating. Matthew Modine is Pepsi marketer extraordinaire John Sculley, whom Jobs would employ when Apple is off the ground, to take it into orbit.

Jobs was disloyal, selfish and blinkered. He knocked up a girl in college and abandoned her with their kid (who kept sending him “dear daddy” letters); his backpacking friend was ignored into resigning; his best friend Woz resigned in a hail of tears (“remember when it was fun?”); investor Markkula didn’t support Jobs when he was ousted from Apple, and the first thing Jobs did when he returned was to sack Markkula… So Jobs was a success at the expense of his friends, allies and his own humanity. I don’t think he cared; however, there is just not enough depth in this movie as to why he was such a champion a-hole.

Jobs was definitely in many respects a genius, so we give him a pass for his unsavory traits. Show me a leader who is a savory character and I’ll show you a follower. However, with its jumpy chronology and seeming impatience to be over with scenes which are little more than vignettes, JOBS doesn’t convey the truly trailblazing nature of Jobs’s achievements. Consider that Steve Jobs lived in a world where “computers” were big boxy things with reel tapes mounted on them and flashing lights, like in 1950s science fiction movies. Jobs envisioned the computer not as clinical robot that took up the space of a refrigerator, but a personal device, and pushed to make the interaction with a computer a one-on-one intimate experience. No one – and I’m guessing not even Steve – knew exactly where they were headed, but there was definitely something better than those reel-boxes and Pong; we know this now… but just try to imagine the close-minded climate Jobs had to break out of back then. He literally had to think “outside the box” – outside the refrigerator box…

Though Jobs was a far-seer, there was a synergy erupting in the computer universe. Apple was in constant battle with IBM (trying to outdo IBM’s cheaper creations, keeping its designs secret so they didn’t end up in IBM machines, competing with IBM sales, etc.) and with a little company called Microsoft. Microsoft’s own computer miracle man/founder, Bill Gates, was a contemporary of Jobs and they had that respect/hatred relationship reserved for vampire lovers – two people so alike that they simultaneously attract and repulse each other. Apple’s earliest devices used Microsoft parts, and Gates bailed out Apple when Jobs returned to take the reins again. The movie doesn’t cover this relationship at all, opting to show only one scene where Jobs cusses out Gates on the phone, “You psychopathic, unimaginative criminal!” believing Microsoft had stolen Mac ideas (which was probably true, but Jobs fails to acknowledge how many other people’s ideas he had stolen, in a life spent rationalizing theft of other people’s ideas, “We have always been shameless about stealing great ideas…”).

There are two major disconnects in the movie: Jobs is portrayed as The Artist, willing to spend any amount of money to perfect his designs before releasing them for public consumption. Despite warnings from his board of directors (headed by J.K. Simmons as Arthur Rock), he loses so much company money that they vote him off the board. IBM overtakes Apple in sales. Jobs decides to quit, and establishes another computer company, NeXT. Here’s the first disconnect: If Jobs applied the same ethos to NeXT – and if there were no advisors to warn him of losses, as there were at Apple – how did Jobs ever make money? He must have started playing by the rules that ‘near enough is good enough’ for the masses, otherwise, how do you succeed with a business model where you spend more money than your products are making? None of this realization or arc is portrayed.

The second disconnect: Years later, Sculley the marketing guy runs Apple into the ground and new CEO Gil Amelio (Kevin Dunn) asks Jobs to return to the company. And in a swoon of cognitive dissonance, Jobs balks, citing a laundry list of losses and debts and layoffs– Waitaminute! Isn’t that why YOU were kicked out in the first place? For being a stubborn ass and losing money?! So when Jobs was trying to push his vision and lost money, he was a lone pirate hero on the seas of adversity striving for perfection, yet when Sculley tried to push his vision and lost money, he was just an evil corporate loser? And Jobs, what gives you the audacity to imply that if you resumed your position you would make money? Would you be applying your patented Steve’s Way Or The Highway business model again, sir? Oh, that would be delightful!

Obviously, something a lot more complicated transpired – some reconciliation with profit and product (and the Gates infusion is never mentioned) – and Jobs does in fact pull the company back from the brink. A stupid metaphorical scene showing Jobs weeding his garden as Apple is weeding out the bad management, is not enough to explain how Jobs himself turned his attitude around. Which brings us to a third disconnect: When Jobs is young, he is shown as a canny businessman, negotiating like a shark with Markkula; suddenly at Apple, he is Ahab, throwing out profit to focus on designing a better drop-down menu or somesuch; then he’s ousted – suddenly he’s the businessman again at NeXT, so much so that the people who kicked him out for being a blinkered artist want to hire him back for his business savvy! What the hell is going on here? Ctrl+Alt+Delete…

Final insult is aimed at young turks dreaming big: in an orchestra swell, Jobs sits at a studio mic doing a flesh-crawling voiceover: “Here’s to the crazy ones, the misfits, the rebels…” What is this slomo montage in aid of? You don’t have to “create” any inspiration around Jobs – his life is inspirational. He’s not some unknown hero – we’ve all got Steve’s handiwork in our pockets RIGHT NOW. This techno-architect did change the world. Why the self-aggrandizing soliloquy?

Jobs was successful enough at a young age to become quite insular, so maybe he did voice this patently ridiculous platitude at some point, but in the context of this unfocused movie – it just does not compute!